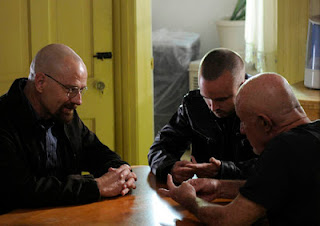 So, the other nerds on this blog don't watch Breaking Bad. Seriously, they don't watch the best show ever. If I knew more about sci-fi I'd insult them for obsessing over the scientific merits of whatever it is that Doctor Who does or whether or not midi-chlorians...I don't even have enough familiarity with nerd lore to finish this sentence. My point is that The G and Vance should get themselves a hundred tacos for a hundred dollars and watch Breaking Bad form start to finish over a weekend. Next weekend. It's on Netflix, guys. Get to it.

Episode 2 of the fifth season of Breaking Bad should have been the season opener. As I argued last week, the debut episode was a bit underwhelming and that the caper at its center wasn’t all that exciting. A good episode, yes. But, hardly enough payoff for those of us who’ve been eagerly awaiting the show's return since Gus got half his face blown off.

“Madrigal” did it for me. We got some new information that will likely have lasting implications, especially as Walt and Jesse take over their former employer's non-chicken empire.

The fact that Walt and Jesse played a secondary role in episode 2 is probably the reason for it not being the season opener. Instead, the story focused more on Gus’s crew. Rather than the cast of narcos and gangbangers who’ve lurked in the background over Breaking Bad’s first four seasons, the criminal enterprise Gus built consisted of corrupt yuppies, business owners, and corporate shills -- and a few thugs. Plus one bad ass old man. 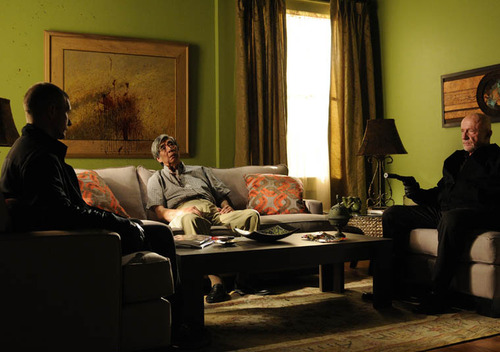 Enter Mike Ehrmantraut, Gus’s head of security, lieutenant, cleaner, and consummate professional. The man is preternaturally emotionless, except when it comes to Walt, whom he refers to as a “time bomb.” But in many ways he is similar to Walt -- at least the old Walt. Episode 2 shows that, like our hero, Mike may be doing this all for his family. He’s also loyal to “his guys,” the network of criminals and corrupt businessmen who ran Gus’s operation -- well, all of them except Walt. When Lydia -- the Yuppie liason between the German company Madrigal and the meth manufactures -- suggests that Mike whack off the eleven individuals who might cut a deal with the DEA, he refuses. He trusts his guys, he’s vetted them all, and he knows they won’t flip. When one of his crew takes Lydia's offer and tries to lure Mike into a trap, Mike takes it in stride, the pro that he is. He turns the tables and not only survives, but sets a trap for Lydia.

Unfortunately for Mike, the trap requires that he accept Walt’s offer to build a new organization producing and distributing meth. He’s now in business with a man he loathes and the man whom he fears will bring him down. Eventually.

Walt has become truly loathsome. First we have him covering his ass, planting a fake ricin-containing cigarette in Jesse’s apartment to not only convince Jesse of his innocence in poisoning Brock, but, more importantly, to bring Jesse back under his thumb, to manipulate his erstwhile partner's guilt as a means for securing his loyalty. This stands in marked contrast to Walt’s behavior in Season 2, when he puts himself between Jesse and Tuco's M-16. And it serves as a perhaps too obvious foil to Mike's code of honor.

As if this weren’t enough, the episode ends with Walt crawling into bed with his terrified wife. Skyler’s fear of her own husband has left her in a catatonic state. During the episode's last scene Walt tries to reassure her that what she’s done -- crippling Ted Beneke -- is OK, because she did for her family. But, since he’s trying to get some while persuading her of this, we’re disgusted. Walt has become an undeniably shitty man.

And that is the genius of Vince Gilligan and his team of writers. They’ve developed the series' main character, but in directions we didn’t expect. What other show is willing to force their viewers to hate the hero?

I still kind of want to see him win. But I'll enjoy watching him fall.

Bonuses: +1 for being almost all about Mike; +1 for not relying on stereotypical criminals

Penalties: -1 for being better than the season opener

Nerd coefficient: 8/10 "Well worth your time and attention."

[See explanation of our non-inflated scores here.]
Posted by Philippe Duhart at 8:52:00 AM