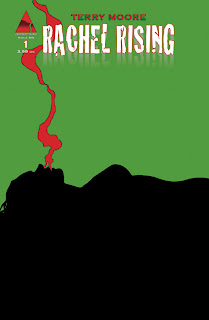 
When devising a horror comic, most creators go one of two routes: they choose either to either fill their books with scary monsters or with gratuitous gore. Or they do both. The truly gifted comic auteur, however, chooses the path less taken. They go creepy -- which is not easily done in a comic. That’s why there been so few From Hells and Black Holes. It takes a mature storyteller, one at the peak of his or her career, to pull off creepy .

Terry Moore of Strangers in Paradise and Echo fame has done just accomplished this with Rachel Rising (Abstract Studio Comics). It’s a creepy story that I can’t get enough of.

Rachel Rising takes place in the small town of Manson, where the normal operations of life and death have gone sideways. People die, but they won’t stay dead. A mysterious and potentially demonic blonde haunts the town, causing a little girl to engage in some seriously f'ed up acts of violence. And, our eponymous heroine finds herself at the middle of this creeping apocalypse. Because she's pretty dead and can’t seem to get any deader.

If the above depiction seems a little short on detail, that’s due in large part to the deliberate pacing of Rachel Rising: eight issues in and we haven’t been told much more than this. In contrast to the hyper-kinetic, overly verbose plotting that Brian Michael Bendis has made the hallmark of comic book storytelling these days, Moore takes his time. Scenes go on for pages, panels are allowed to be uncluttered by word balloons and pointless dialog, characters are developed subtly, images tell the story as much as do words. The event that kicks off the series -- Rachel’s rising from a shallow grave -- goes on for 12 pages, half the first issue. There’s a certain sparseness to the story that is utterly mesmerizing. Moore allows his story space to evolve and grow, with each issue centering on a single revelation or development.

And this makes the reader want to come back for more. The reader being me. And you, if you like things that are great.

The book is creepy, Vincent Price creepy. But Moore does not let eeriness take over the book. The dark, gothic themes are balanced by lightheartedness and actual human emotion. The book's undead aren’t zombies, but human with a dying problem.. Rachel isn’t a morose, brooding Lestat, but a confused young woman who’s trying to get on with her life -- even though it has apparently ended, at least in the conventional "we got a pulse" sort of way. The dialog in Rachel Rising stands out. It's is funny, at times tender, counterbalancing the horror of the story perfectly. The book doesn’t take itself too seriously, an all too common shortcoming of horror stories regardless of media.

Moore’s art attains a similar sparseness and balance. There’s a simple, almost intentionally rushed quality to his pen-and-ink work here, a deft use of black and white that evokes both the beauty of his landscapes and the smallness of the town, serving to heighten the dread that drives the story. Like his plotting and dialog, his artwork looks almost intentionally uncluttered, but not without detail and realism. 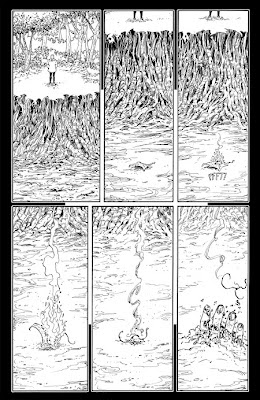 Moore pays careful attention in particular to facial expression. His characters say more with their eyes and frowns than most comic writers manage with endless hackneyed dialog.

Some mention must be made of the violence in Rachel Rising, of which there is plenty. A murder in issue 2 is more chilling, more brutal, and more disturbing than anything Garth Ennis will ever imagine up. By and large, though, violence occurs off page. It is suggested, rather than thrown in our faces. This lack of gratuitous violence is refreshing, given the amount of gore that so many use in penning horror comics. Let’s face it, since Faust and Hellraiser, gore has been boring.

Terry Moore has said that he imagines Rachel Rising as more akin to TV show than to film. And the deliberate pacing of the first eight issues attests to this. He’s clearly taking his time, giving us only hints and suggestions of the larger plot that he’s developing. My only fear is that the series will go the Lost route, giving us only questions and more questions -- and very few answers. I sincerely hope he has the story planned out, that he’s not making it up as he goes along. Because I’m in for the long haul.

[Read about our non-inflated scoring system, where anything above a 5 is more good than bad, here]
Posted by Philippe Duhart at 6:03:00 AM