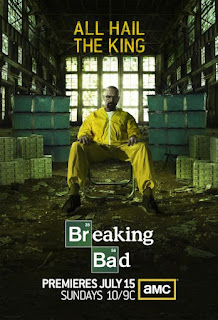 How couldn’t I have had high expectations? Breaking Bad had already proven itself as the most compelling show on TV before everyone’s favorite high-school-science-teacher-turned-meth-manufacturer, Walter White, became a truly bad motherf*cker last season. You all remember what happened to Gus. Where do you go from there?

Breaking Bad is smart. There’s no need to get more violent, to go beyond what we've seen before. The show’s most brutal violence takes place in conversation, is manifested in cold stares and sharp words. The show will take it slow, pile on the tension. No need for blood and guts to take things one step further.

The first episode of the final season, "Live Free or Die," opened with a future Walter White celebrating his 52nd birthday at, where else, a Denny’s. He’s disheveled, his hair grown out, he's sporting an unkempt beard and a New Hampshire ID. A man enters the restaurant, catching Walt’s eye. Walt follows him to the bathroom. Money and car keys are exchanged. Walt asked if there’s a manual. The man replies that he’s printed something off of the internet. “Good luck, I guess” the man tells Walt.

Walt’s just bought a car with an M-60 in the trunk. This is going to be a good season.

But, that’s the future. The show quickly jumps back to the immediate aftermath of Gus’s death. Mike is pissed, Skyler is scared, Jesse is loyal, and Walt…well, Walt’s bad. Not all bad, but bad enough. But he’s not only bad, he’s convinced himself that he. Killing Gus and scaring Skyler has made the man confident. Much more confident than future Walt sitting alone at Denny’s. My guess is that this confidence will not serve Walt well. 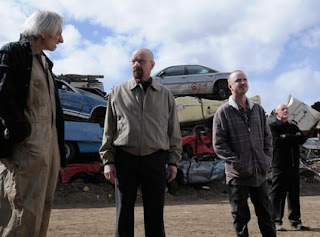 I hate to say it, but "Live Free or Die" was a bit of a disappointment. Just a bit, though. Much of the episode felt more appropriate as a mid-season throwaway than as the opener. There was a lot of logistical work, i.e. the magnets, which didn’t really feel all that dramatic. Yes, Walter, Jesse, and Mike would’ve been sent up the river had their magnet trick not worked. But, compared with taking out Gus in last season’s finale, it seemed a little thin.

Don't get me wrong, it was still cool.

The strength of this episode -- as of the show itself -- lies the acting. In particular, Anna Gunn as Skyler White shined in the opener. Her interaction with Ted Beneke, whom we assumed had been killed after being visited by hired goons last season, was brilliant in its subtlety. Skyler had spent most of the episode afraid -- afraid of Walt, afraid of Ted telling the cops about how he ended up in the hospital. But, when it becomes apparent that it's Ted who is afraid of Skyler, she gets a taste of the power that has pushed her husband to the dark side. If Skyler continues on this path, the series would certainly be throwing us a curve ball -- which is why we love Breaking Bad in the first place.

But I come back in the end to the beginning: What’s Walt doing with an M-60? Who’s he going to war with? Because this is a weapon for war. If he needs to take out Mike or Jesse -- or even Saul -- a simple handgun would suffice. But Walt is clearly intending to do some real, Frank Castle damage. The season opener gave us no real hints concerning whom or what Walt needs to shoot, but this is one of the strengths of the show: it revels in screwing with its audience, with taking turns we don't expect. There’s no reason to guess, to hypothesize. This isn’t Lost. This is the best show on TV, despite the relatively weak opener.

That’s right, I said it. The best show on TV. Ever. Better than The Wire. I’ve committed white liberal academic blasphemy by making this statement. But I tell it like it is, kids. Best show ever.

Bonuses: +1 for the M-60 in the trunk; +1 for the science references (string theory, the God particle, magnets!)

Penalties: -1 for the caper-centric plot as an opener