I am happy to report that my New Year's resolutions are already off to a pretty good start. My weekly recap is back to its usual format and includes one Marvel book, one DC book, and three from smaller publishers.  Nothing too indie, but a step in the right direction. I finally watched Justice League and it was pretty solid. It had a slow start, but did a good job of setting up the DC Cinematic Universe. It definitely has me more motivated to check out Aquaman while it is still in the theaters. 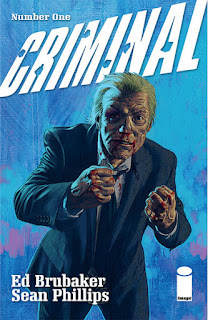 Pick of the Week:
Criminal #1 - I have long enjoyed the Criminal series from Ed Brubaker and Sean Phillips and was stoked to learn they were kicking off 2019 with a new monthly version of Criminal. If you are looking for some solid noir I cannot recommend this book or any of the previous entries enough. Brubaker is on my short list of favorite comic book authors and his collaborations with Phillips have been second to none.  If the first issue is any hint, Teeg Lawless is in for quite the ride in 2019 and it all started when his son robbed a former professional wrestler for a diamond necklace. Lawless now has two weeks to raise $25,000 and he has lost most of his contacts, including his best friend, while he was behind bars. The first issue maintains the gritty tone established many years ago and I cannot wait to see what is in store for Lawless and his family throughout the year.

The Rest:
Batman #62 - If you took a break from Batman like I did early last year now is a great time to revisit the Dark Knight. Tom King has really made this character his own and part two of the "Nightmares" arc completely lives up to its name. I am not entirely sure what I read, but it was gripping and felt like a page out of a Saw movie. Batman wakes up in a befuddled state, hanging by his feet surrounded by butchered pigs in a slaughterhouse. He spends the bulk of the issue trying to communicate with his captor, a creepy villain dressed in a pig mask, and understand why he is there and why he can't speak or hear anything. King, through Batman's inner monologue, places the reader in the middle of the stench and fear that Batman is facing in this mysterious location.  This was a thrilling read that leaves me hopeful for where King is heading in 2019.

Prodigy #2 - Mark Millar's over the top series gets even more ridiculous in its second issue and that is a good thing. He gives us villains who literally hunt orphans for sport, Edison Crane bribing the Kremlin for 30 minutes of time in a library, and a quest for an ancient scroll that will save the earth from an invasion from a parallel Earth. Crane is one of the most arrogant and entertaining leads I have seen in a book lately and this book honestly reminds me in a strange way of John Layman's work in Chew. You have cartoonish villains, a hero who commands immense power, and a surreal setting that feels somehow realistic.

Star Wars Adventures: Destroyer Down #3 - It looks like this series is spinning off to a potential ongoing focused on the Star Destroyer's past and how it came to be abandoned on Jakuu. The current timeline of Rey attempting to scavenge the ship came to a fitting end after she ran into an Imperial Droid that was sworn to protect the ship. The comical scenes involved her getting tossed into the airlock for what the droid thought was an instant death and in actuality was her falling back onto the barren wasteland that is Jakuu.  Not sure if I will continue this series as it continues, but it was a great all-ages read for Star Wars fans.

Man Without Fear #2 - Daredevil's reboot continues in an emotionally gripping issue in which Matt Murdock admits that he is afraid. Now that Daredevil has been killed and he may never walk again, Murdock has to convince others that he really is leaving that character behind him.  It is easier said than done as Matt is haunted by the ghosts of his past.  I thought it was a bold move to keep this issue confined to the hospital in which he is recovering and was impressed how effective it was.