Microreview [book]: A Conspiracy of Truths, by Alexandra Rowland

Alexandra Rowland’s A Conspiracy of Truths uses voice, point of view, and an unreliable narrator in order to provide a singular spin on epic fantasy tropes. 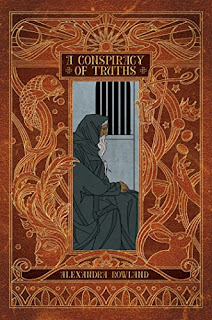 Chant is an elderly wandering storyteller, taking his young apprentice from nation to nation, telling stories, and gathering new ones. However, an inquisitive and curious storyteller can easily be mistaken for a spy, and further, engaged in witchcraft. These accusations have landed Chant in prison, and while a jail may seem to be an unlikely place to try and launch a revolution from, even when one isn’t quite trying at first--but that is precisely what Chant might need to do to keep his own neck intact. For you see, a sentence of death is inevitable. The clock is ticking, and Chant’s efforts to avoid death will have many, many unexpected consequences.

This is the story of Alexandra Rowland’s debut now, A Conspiracy of Truths

There are many ways to construct and design the polities and cultures of a fantasy world, although some ways to construct a world are more difficult and time consuming than others. The De Camp model is what Rowland uses here in A Conspiracy of Truths. Where the novel takes place, we get interesting, quirky and unusual details (although not to the obsessive Vancean level) of the environment, everything a little askew of what we might expect. In Nuryevet, we get this all across the board, from discussions of language and how names are constructed, to their rickety elective political system, to food and culture. Leavening in with this is plenty of contrast and tantalizing references to many other places, providing odd and rich bits of details on random facts about them. This highlights the unusual nature of the environment that the novel takes place in as a fantastic world compared to our own, and also shows a bricolage of diversity within the fantasy world itself.

I’ve read many many fantasies where a few monocultural empires and political units seem to have a lack of any real differences, giving the fantasy world a lot of sameness in their difference from our own. The De Camp model avoids this problem, and makes the fantasy world seem as complex as our own. Rowland particularly does this in discussions of language. Chant speaks and understands many languages and there are discussions on how things can or can’t be rendered in various tongues and cultures, highlighting the world she has made. It’s an effective technique and one that works very well.

The novel features a memorable pair of protagonists. In addition to Chant, as above, there is his traveling companion, Ylfing. He’s a cinnamon roll of a secondary character, who sees the good in everyone, and is a bit of a soft hearted dunderhead that is too good for the world he lives in. He makes an wonderful contrast to his mentor and their relationship is a classic mentor/mentee where the mentor’s affection to the mentee has to be often read through the lines. Chant himself seems often incapable of admitting his affection for him. Consanza, his reluctant lawyer, also comes in here for a bit of character development. Seeking to get to a position of comfort in her rickety society, Chant’s case is at first a burden to her that she would rather not shoulder, because it seems to be a destined loser, and she’s seeking to keep her perfect record. As the narrative progresses, we get to see much of the internal workings of the society of Nuryevet from what she tells Chant, making her useful as a conduit for constructing the environment and the world around. The secondary characters, including the Queens, are well drawn, a nest of competing characters whose rivalries can be, and are exploited, by the imprisoned Chant.

The clever narrative and writing techniques of the novel elevate the novel further into the realm of something. Chant is an unreliable narrator, shading truths and outright lying to his captors in order to keep alive, especially once an unpleasant truth told imperils his life further. But that unreliability and malleability of the truth of the stories Chant tells go not only to his captors, but also to the audience. There is a moment in the narrative where a basic fact seemingly baked into the book turns out to be gloriously wrong, reassessing what an observant reader has already assumed. Knowing this book does these tricks is essential to reading it, I think--I think a reader who picks this up unaware of its conventions is going to feel a bit cheated or even angry when the narrative tricks become clear, especially the larger turns. This is not a Fantasy 101 novel, this is a novel for readers who have read plenty of secondary world fantasy and want to see some stretches and extensions of the form..


I think the fantastic elements, in what is otherwise a low magic fantasy universe could have been clarified somewhat. While I realize that everything has to be seen through the lens of that aforementioned unreliable narrator, the fantastic elements that we do see are a bit indistinct. It seems that the author is much more interested in other things, but I do prefer my fantasy to have a little more bite with regard to the fantastic than I got here.

The book is slightly unusual in that, for it not being a one and done, I am curious as to how the author can manage to go from here. Given the pattern of the book and its revelations and when and what is going on, and how those narratives  intersect and resolve, how the author goes from the ending of this book forward, and keep the inventiveness she showed here at the same time.It’s a good problem to have: How to follow up an inventive and strong book, since you have to have written one in the first place.


All in all, however, some of the value of Turtledove’s alternate histories is to see our world, or an aspect of what our world once was, through the lens of a timeline that never was and never could be. The book shows just how senseless religious fundamentalism really is, by showing that with just a couple of changes,the center of civilization could have been elsewhere, and the world turned upside down, with those forces of intolerance hate taking root elsewhere.

Bonuses : +1 for excellent use of a unreliable narrator
+1 for clever worldbuilding

Penalties : -1 for slightly unclear fantastic elements
-1 for the narrative tricks that might annoy readers that would find such unwelcome.

Nerd Coefficient :8/10: well worth your time and attention