Microreview [Book]: The Wolf in the Whale by Jordanna Max Brodsky

The Wolf in the Whale takes its time to get going but becomes a compelling, if violent, high-stakes historical fantasy. 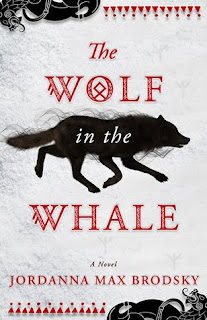 Content Warning: This book contains several scenes involving rape and sexual violence, including one which is used to humiliate and forcibly "detransition" a character.

It's my first "proper" winter in five years, and that means it's time to rediscover blankets and thermal leggings and to read all the cold, cosy books I can get my hands on. And it doesn't get much chillier than this! The Wolf in the Whale is a historical fantasy set in what is now Baffin Island (or Qikiqtaaluk) in north east Canada, where spring arrives in June and the sun doesn't appear at all in December. Jordanna Max Brodsky has used the available historical evidence about the Inuit arrival on the island over a thousand years ago, and of the Viking settlements in Vinland (now Newfoundland) at the same time, to weave together a meeting of these two groups, and of their respective mythologies and destinies. The result is a rich mixture of myth and of the realities of survival in one of the most unforgiving locations on earth - a perfect setting for a fireside read if there ever was one. (I should note, for the record, that southeast England does not get as cold as Baffin Island, but that's never stopped me complaining before.)

Back to the book. The Wolf in the Whale takes its time getting started, introducing us to the rhythm of a small, precarious Inuit camp through the eyes of Omat, a child who carries the reincarnated soul of his father since birth. Raised by his grandfather, an Angakkuq (spiritual leader), and by his aunt, Omat grows up expecting to become a man who can help hunt and keep his family fed, and hopes to succeed his grandfather and become an Angakkuq himself. However, we soon learn (very soon, if you've read the blurb) that Omat has a female body, and the decision to raise him as male is not without controversy among the rest of the camp. Omat himself clearly identifies more with a male role in these opening chapters, although once the option is presented to him he becomes more interested in the identify of an "Uiluaqtaq": a female bodied person who doesn't menstruate and hunts as a man.

(Note: Having given it some thought, I am choosing to use male pronouns for Omat, as I think this best reflects the identity the author has him adopt throughout most of the book. I'm aware this goes against the book's own publicity materials, which refer to Omat as "she", but this usage makes me feel uncomfortable for reasons related to the violence I talk about below.)

Once Omat's gender identity is introduced as a point of narrative tension, it becomes fairly obvious that we are going to have to watch him fight for it in some way, even if it's just to understand his own relationship to femininity. Although Omat respects the women in his life - especially his aunt and foster-mother Puja - it's clear the kind of masculinity he has been raised in views women's work as inferior. Coming to terms with the extent to which he identifies as female, and how this interacts with his more outwardly expressed masculine identity, makes for an interesting set-up. And, as the setting requires, this is all handled in an Inuit cultural context, though I can't speak to the sensitivity of this portrayal. Nor have I  come across any own voices reviews of this book yet, but I'd encourage readers to seek them out, and I'll be sure to update this review to link any that I find.

Unfortunately, The Wolf in the Whale instead chooses to kickstart the "gender" element of the plot by tearing Omat's gender identity away through rape and forced marriage, taking him away from his family and into a section of living with his rapist and the rapist's other wives as they travel south to hunt whales. The way this scene plays out effectively links the sexual violence to the trauma of losing acceptance of his chosen gender identity, and turns his female body into a symbol of that loss of power, and of general inferiority. Although this early scene is the only rape that actually happens "on-screen", the theme of sexual violence and gendered power runs throughout the rest of the book. This includes later exonerating an otherwise sympathetic male character for their role in mass rape as a war tactic (including the unfortunate decision to narrate a rape scene from his perspective), as well as repeated mentions of a myth in which the moon rapes the sun. As these things go, it's not poorly handled or voyeuristic, and there are some satisfying elements of revenge and healing in the book's conclusion. However, the interaction of sexual violence with the gender identity subplot is frustrating, to say the least, and I know I'm not alone in being tired of all rape in fiction. Anyone for whom that is the case will probably want to give The Wolf in the Whale a pass.

Once through Omat's childhood, and the sequence of his "humiliation" travelling south with his rapist's family (which together take up around a third of the book), the narrative picks up significantly as the Vikings come onto the scene. Here, at last, the stakes become clear, and it's great to see Omat regain some motivation and start actively working to change the fortunes of his community, now under threat from the Vikings and, more insidiously, the Christian myth that has arrived with them. The introduction of wolf dog puppies at this point is extremely welcome, as is that of Brandr, Omat's adopted Viking guide. Once the issue of communication is magically resolved, Brandr and Omat's interactions become generally very entertaining - not least because there isn't a threat of sexual violence - and the bond that develops between them becomes one of the most compelling in the book. As the political machinations of the Vikings and their gods come into conflict with the already precarious position of the few Inuit on the island, things escalate into a climax involving both humans and gods. Omat gets to use every resource at his disposal - including things he learns from his captors, especially their powerful non-combatant female leader - to save his family from what he's convinced will be disastrous contact.

As noted above, I'm not Inuit (or trans), and I can't speak directly to the portrayal of these elements in the novel, although I note that Brodsky spent time with Inuit communities in order to research the book. I'm also mindful that The Wolf in the Whale portrays not an Inuit community from today, but one from over a thousand years ago, which I think changes the onus on the author when it comes to representing another culture. I think there's an interesting analysis that's beyond the scope of this review (and probably this reviewer) about the impact of juxtaposing historical cultures that were cotemporaneous, but where present day marginalisation makes it problematic to treat them as equivalent in fiction. I felt this particularly in parts where The Wolf in the Whale deals with Inuit spiritual traditions alongside Viking mythology: the latter are now treated entirely as fictional characters in our culture, right down to their inclusion in the Marvel superhero universe, whereas the former has ongoing spiritual significance for cultures which still exist on the margins. Again, I say this not to suggest Brodsky handles these elements insensitively - her characters interact with Inuit gods who, with one notable (rapist) exception, are treated as sympathetic and powerful even when their interests don't align with Omat's - but to highlight my limitations as a reviewer when handling a text like this.

From my incomplete perspective, therefore, I found The Wolf in the Whale a slow but worthy read, which built up into a compelling story of interaction between cultures and the people who, willingly or otherwise, find themselves caught in the middle of these momentous meetings. Having had so many trials put before him, I was very satisfied with where Brodsky chose to end Omat's tale, doing justice to the themes and to the historical "reality" of the story while also rewarding both character and reader. I'm glad that writers like Brodsky are putting in the work to put out nuanced, researched historical fantasy narratives that aren't about Western Europe, and I hope that this is a successful example of that work paying off. While I - like the overwhelming majority of reviewers this book is likely to reach - don't have the tools to assess how sensitive this portrayal is, and I am hesitant to recommend any book whose plot relies on rape to the extent that this one does without making that reliance very clear, I personally enjoyed The Wolf in the Whale. While it might not sound like the most natural comfort reading, this book gave me plenty of material to see me through some (admittedly less-than-Arctic) winter nights.

Penalties: -1 Takes a third of the book to really get going; -1 sexual violence which is used to "detransition" Omat and treat their first interactions with femininity as inherently humiliating and traumatic