T Frohock's Where Oblivion Lives provides a strong novel-length followup to her Los Nefilim trilogy of novellas that works well as a jumping on point for new readers. 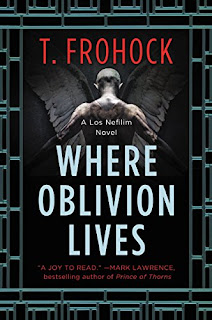 The time is 1932. The Spanish Civil War is on the horizon, Spain is a beautiful, but rather turbulent place. Diago and Miquel are lovers, and married in their own eyes, even if much of the world around them would not approve of a relationship between two men. Even more so that the two of them are raising Diago’s young son, Rafael. The fact that all three are secretly supernatural beings with one foot in this world, and the other in the world of the Nefilim is an additional complication.  But it is news of a Stradivarius for sale, an instrument that Diago once wielded in an earlier life, and the fact that it could be used for esoteric evil in the wrong hands, that will test both men, their son and the rest of the Nefilim as well.

Welcome to T Frohock’s Where Oblivion Lives, the first length novel in the Los Nefilim verse.

The strengths start with the characters, a strength of all of the author’s writing. Where the author’s leap off of the page is where characters meet and connect, conflict and come together, and otherwise form relationships of all sorts and stripes. The loving queer relationship, the family of Diago, Miquel and Rafael is the center of these relationships, and those links draw all three into contact with other members of the supernatural community, forging friendships and rivalries that make for social dynamics that feel and come across as very real. Even minor characters like the young Ysabel get characterization and character development in a very few scenes.

The worldbuilding first and foremost shows the strengths of the author’s historical research, as she effective places the reader into1932 Spain (and later, Germany). There is a real sense of place, of understanding a nation and a historical moment on the road to a yawning abyss that the author knows about and the savvy reader knows is coming. But the characters, even given their supernatural nature, only know that darkness is coming and that they will play a role in it, and the time now is to prepare. That tension between the Nefilim and the human world, and how the political situation in the human world influences and informs the supernatural world is one of the best mirror parallels in the book.

This does provide for the author, and thus the reader, a way to show the whole supernatural verse by means of illuminating this conflict. A lot of the heavy lifting, and avoiding as you know, bob moments in conveying just who and what these forces are and what their goals are is wrapped in how the two sides are drawn into conflict with each other. And then, given the plot and the ultimate revelation of the driving force of the plot, we get an additional layer of the human-Nefilim interactions and even more crunchy exploration of her universe.

The world of her Nefilim verse to my roleplaying heart feels like a game of the RPG In Nomine, a game of Angels, Demons and those in between, set in 1932 Spain. Her cosmology and her hierarchies of how her supernatural worlds only have vague parallels to the RPG, but the idea of light and dark forces grounded in a human world, with supernatural infusions and intrusions on the mundane reality does make me think of a low power In Nomine game where the characters for the most part stay away from Heaven or Hell, and the beating heart of it all are the anchors and threads that connect all of the characters, allied and opposed alike.

The prose is as always one of the things that I reflect upon time and again as I look back on the reading experience. Even given the rich characters and the worldbuilding, what makes this novel really sing is the author’s ability on a line level to evoke those character beats, and to evoke and develop that world. From Spanish Villas to German Castles, to tense conversations to expressions of love and deep emotional bonds, the author always has the right word, the effective phrase, the turn of language to provide maximal impact. This novel would make a good entry point for readers who delight mostly mimetic fiction and want to give some sort of fantasy novel a try, especially if they have read and loved historical fiction. Conversely, for genre readers, this brand of writing is more like Caitlin Kiernan and Kij Johnson than, say, Jim Butcher.

The novel doesn’t require the reader to have read the previous novellas set in this universe (In Midnight’s Silence, Without Light or Guide, and The Second Death). The author does an excellent job in encapsulating the events and relevant plot points from those three stories in the early portions of Where Oblivion Lives, so that from a point of view of “What is going on?” readers are rather well grounded in the setup. Where those novellas might be valuable, after reading this work, is to find out more of the backstory of Miquel and Diago and the latter’s relationship to his son, Rafael. Having come into this novel having devoured those, I had a rich foregrounding in the characters and was invested in them already. However, I think you can read the novel and then go back to the novellas (which take place in 1931, a year before this book) to fill in details.

Terrible times are ahead for the world of Los Nefilim. The Spanish Civil War and the Second World War are on the horizon. The supernatural as well as the mortal worlds are clearly going to be tested, tormented and transformed by future events that threaten to put a permanent darkness over all. But it is the light of Frohock’s characters, candles against that darkness, that shows that the key to writing and evoking dark fantasy is to have characters whose natures, however imperfect, are set against that darkness. In this, the author succeeds wonderfully.

Anyone interested in  historical-grounded dark fantasy should give the Los Nefilim verse of T Frohock a try. There are wondrous things within to be found.

Bonuses: +1 for evoactive use of historical detail to provide setting
+1 for sympathetically developed complex characters

Penalties: -1 for a little bit of rushed plotting at points in the book.