Microreview [book]: In the Vanisher's Palace by Aliette de Bodard

Aliette De Bodard’s In the Vanishers' Palace provides an entirely new spin on an old story, bringing her multivariate strengths in genre writing to bear in a enthralling novella. 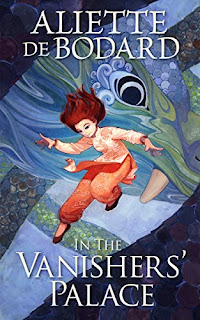 The story of the Beauty and the Beast, bound relationship to a monster as a price for a service or favor, is a story that spans the globe, and strikes at the heart of a lot of myths and tropes about family relationships, gender politics, power dynamics, autonomy, freedom, choice and a whole lot more. Beauty and the Beast is far more than dancing animated clocks and the song “Be Our Guest”. In The Vanishers' Palace, Aliette de Bodard takes the Beauty and the Beast story in new directions, giving a strong critique of some of the tropes, interrogating others, and providing a queer friendly narrative, amongst many other strands, in a densely packed novella.

In the Vanishers' Palace is ultimately the story of Yên, a young woman in the village, the “Beauty” and  Vu Côn, the latter being the Dragon, the “Beast”. It is their interspecies, queer relationship that is the heart of the novella, as Yên, as the price for the Dragon performing a service of healing for a member of the village, is carried off to where the Dragon dwells, the titular Vanisher’s Palace.

The relationship map starts there and spirals outward on both sides. Yên and her mother have a very tense and strained relationship, to say the least, with the members of the village and their status within it is tenuous and perilously close to expulsion or worse. That fraught set of relationships is extended, for Yên, when her role at the Palace is made clear--to become a teacher for Vu Côn’s twin children, Dan Thông and Dan Liên. Young, rambunctious, curious, inventive, eager and prodigal dragons are quite the challenge for an “indifferent scholar” such as Yên to suddenly have to deal with, especially since they have their own plans and ideas and a complex relationship with their mother. The relationship dynamics, quite frankly, is a major reason to read De Bodard’s work and if you want your fantasy full of complex and interesting character beats and evolving relationships (above and beyond the ultimate queer romance between human and dragon), she is the author you have waiting to read and this book is the book to get hooked into what she does on those fronts.

And there is a ton of excellent immersive worldbuilding here going on too. I also enjoy the richness of her worlds, from the small details described to evoke place and time, be it an impoverished village or the weird wonders of the Palace, all the way to how and why she builds her worlds. She has a magic system that slowly gets spooled out for the reader to understand, to cypher, to become a scholar of even as the main character learns and grows in that sphere. There are the inhuman, alien, weird, and enthralling rooms and sheer odd spaces of the Vanishers' Palace itself. Yên is in a dangerous place in this palace, and soon learns that warnings to beware certain aspects of the palace are far from idle ones. The Palace is a multidimensional phantasmagoria of a place, inspired by Southeast Asian culture and Escher prints alike.

And then there is the wrapper of the entire milieu and setting that is revealed as the novella goes. This is, as it soon comes out, a post-apocalyptic magicpunk sort of world, where a high civilization of magitech collapsed, leaving a very dark and dangerous world, full of perils and threats. Why couldn’t Yên and her mother easily leave the village, given that they were oppressed there? Because the world outside the points of light of villages is a dark and fallen and dangerous place (this reminds me of her Fallen novels and stories in this regard), and to travel outside the villages is immensely dangerous. Vu Côn herself, and the Palace are tied to the fallen civilization, themselves, in ways they do not quite understand or admit even to themselves. The Vanishers' legacy, then, hangs over everyone and everything. By using this, Aliette provides a polished bronze mirror to look into and see a fantastical world in the reflection thereby.

In the Vanishers' Palace provides all that one might want out of an Aliette de Bodard (including a mention of fish sauce!) and serves as a strong piece of her oeuvre. It provides, at novella length, a way to get a sense of some of the themes, language, style and concerns of her work that offers a key to immersing oneself in the oeuvre of one of the leading lights of fantasy and science fiction today.

Bonuses : +1 for enthralling writing
+1 for rich and immersive worldbuilding
+1 for a completely successful reinterpretation of an old trope

Penalties : -1 for a little bit of wavering in plotting