While the news is about a month old, I don't think I have shared that Hulu ordered a pilot based on Sweet Tooth by Jeff Lemire! Lemire is one of my favorite creators and Sweet Tooth is in my top 5 comics of all time. I am curious to see how the comic will translate to the small screen and hope this gets picked up. 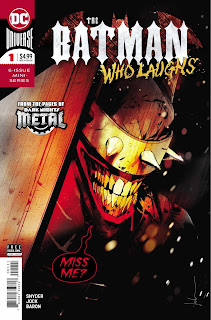 Pick of the Week:
The Batman Who Laughs #1 - When I learned that Scott Snyder was teaming up with Jock for a new Batman miniseries that brought shades of horror back to the Dark Knight I was quite excited. I am happy to report that the first issue didn't disappoint as Batman is now confronted with a Joker/Batman hybrid from another realm. Apparently Joker, no matter what the realm, has a fail safe that will release Joker toxin if anyone were to actually kill him. The Batman in the other realm was successful and is now a Batman who has been poisoned by the Joker toxin and is a force to be reckoned with. Nobody is sure why he has made the trip to this realm, but it isn't good and Batman is desperate to team up with his Joker in a feeble attempt to stop this mad man. Definitely a bit cliche, teaming up with your arch nemesis, but cliche plays well in Batman and I am curious to see where this is headed.

The Rest:
Miles Morales: Spider-Man #1 - In preparation for the movie that is coming out this weekend I thought I should read some Miles Morales. I haven't read any since he debuted many years ago and a reboot is the perfect time to start! Saladin Ahmed does a great job reacquainting the reader with some events in the past that have led Miles to his current predicament. In addition to learning about Miles' school, friends, and personal life, we are taught a bit about his family and are led into the story that is going to drive the first arc. It contains spoilers so I won't go into details, but it is an interesting premise that brought The Rhino to town and I am excited to read more. I will likely share this book with my son who is very excited to see the new movie this weekend.

Birthright #34 - We are reaching a turning point for this series and Mikey is forced to confront his younger brother who has been taken over by a magical toxic brought by the witch Kallista. Mikey refuses to fight his brother and we are treated with flashbacks of their relationship prior to Mikey's disappearance.  This was an interesting issue, and while it contained its fair share of violence, really focused on the relationship between two brothers. Despite their differences and how much they have changed due to recent events, they remain connected by a powerful bond. I am a bit worried for what will happen in the next issue, but excited to see Joshua Williamson start to steer this series towards its conclusion in issue #50.