As we rapidly approach the new year it dawns on me that I may not have many more Thursday Morning Superhero posts in 2018. While it is a bit cliche to post an end of the year list, it is also valuable to reflect on what 2018 gifted us and see what will keep us excited reading into the new year.  Attempting to narrow down your favorite books into a concise list is always a struggle, but here are the five books that had the biggest impact on me personally in 2018. They may not be the best books of 2018 and are presented in no particular order. 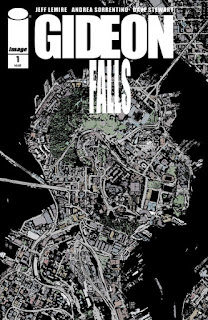 Gideon Falls by Jeff Lemire:
Inspired by Twin Peaks and a series that is being adapted for TV, Gideon Falls is a book that presents two stories that will at some point come to a head. One story is about Father Fred, a new priest who has arrived in Gideon Falls after the current priest recently passed away. The other follows a young man who is currently dealing with mental health issues that have him recovering hidden pieced of a mysterious Black Barn throughout town. Norton and Fred could not be more diametrically opposed characters who are seeking a greater understanding in this mysterious town. I have always been endeared the horror genre in comics and have always been drawn into the characters that Lemire creates. At one point I almost had his phenomenal hockey story Essex County on my syllabus as required reading in a sport management class. The dichotomy of rural and urban play is extremely effective and artist Andrea Sorrentino really brings this series to life. I cannot wait to see what 2019 has in store for the town of Gideon Falls. 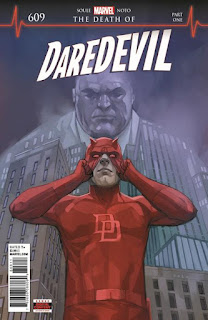 Daredevil by Charles Soule:
I started to fall in love with the Man without Fear during Mark Waid's run on the series starting in 2011. The series has had its ups and downs as most ongoing books do, but Soule's run in 2018 brought Matt Murdock back to his roots in Hell's Kitchen. In addition to finding a way to put the rabbit back in the hat in terms of everyone knowing his secret identity, Soule was able to focus on the relationships that are surrounding Murdock and how his decisions impact those he loves. I also enjoyed the current arc that is eerily similar to the situation in White House. As someone who is a bit of a news junkie, I enjoyed the balance between Murdock attempting to work with and investigate Kingpin at the same time. I am not sure where his run will end up in the big picture, but it reinvigorated my love for Daredevil and has me excited about the passing of the torch in 2019. 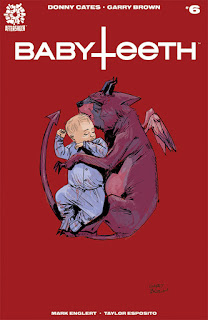 Babyteeth by Donny Cates:
As I mentioned earlier, I have a soft spot for horror books and an even softer spot for young parents. When I learned that Cates was writing a book that centered around the birth of the Anti-Christ and the impact it had on its young mother. I wasn't prepared for the world building that Cates would bring and how emotionally connected I would be drawn to Sadie. Her struggle with her own family and dealing with her child resonated with me in a profound way.  It is a book that can be difficult to read at some points, in a good way, and a series that I highly recommend. After the recent trip into the Red Realm and what this means for Sadie, her child, and her family I am anxiously awaiting this book to return in 2019. 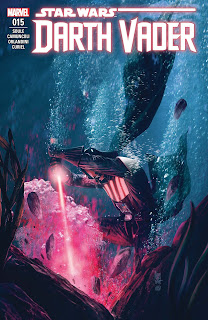 Darth Vader by Charles Soule:
Soule returns on my list for penning my favorite Star Wars book since Marvel regained the rights. I probably sound like a broken record, but Soule's ability to make Vader a truly menacing villain and showcase his incredible power in the Force has brought me a new found respect for Vader. It is consistently the best Star Wars book on the market and spawned a phenomenal spin-off in Doctor Aphra which nearly made the cut for this list. There are so many memorable moments including using mind control on a giant squid in issue #15 and the sheer terror he invokes in the Inquisitors.  The arc that brought Vader under water to deal with the Mon Cala was particularly memorable. Since we don't have a new Star Wars movie this Christmas I am very much looking forward to reading new Star Wars material in 2019. 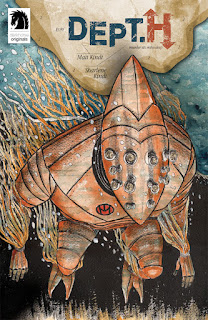 Dept. H by Matt and Sharlene Kindt:
This underwater whodunit from a duo of Kindts came to a fitting conclusion in 2018. It all began when Mia had to journey to an underwater research base after her father was murdered. While the premise the drove the series was attempting to solve who murdered her father, the heart of the book was Mia coming to terms with the relationship she had with her father. We learned about this through a series of flashbacks that really set the tone of the book. In addition to the murder mystery there was extra suspense as it related to a potential pandemic associated with a virus that was working its way towards the surface. Matt and Sharlene's art on this book really added to the tone and the design of the underwater contraptions was a highlight throughout this series. I started appreciating Matt's watercolor technique in Mind MGMT and was thrilled to see a similar style that really added to the mystery. Definitely a book that deserves the deluxe trade paperback treatment and one you should all consider gifting to your comic reading loved ones.