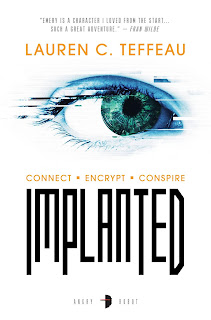 In the enclosed arcology of New Worth, in the former state of Texas, the ravages of a climate change ravaged world are at bay. The residents in the vertically oriented space live and work in a interconnected, technologically oriented world. Everyone is curious if colonization of the outside or even if real life is possible outside of the arcologies. (reminding me of the underground cities in Carrie Patel’s Recoletta series, but at much higher tech level).

Enter student Emery Driscoll. She’s from the lower regions of the city, as those who are in power and wealth are higher up in this vertically oriented space. She has been trying to use her studies to better her life, to socially climb (in the literal way that it works in New Worth). Her plans to do so are disrupted, as her efforts to help someone in danger are used by a clandestine courier company who blackmails her into working for them and cutting off all of her ties. Now Emery has to carry sensitive information not trusted to network computers. Information that is securely stored in her very blood. When Emery realizes the import and danger that her newest data entails, information that could change the future of New Worth, and outside of it, Emery is suddenly put into difficult choices and a cat and mouse game with multiple factions.

This is the story of Lauren Teffeau’s Implanted.

The strength of the novel is Emily as a flawed, complicated character with lots of fiddly bits to her personality and story. Far from being a smooth operator when dropped into her new, unwelcome situation, and on the other hand, avoiding the trap of making her a completely clueless newbie without any skills, the author creates Emily as someone with strengths and weaknesses, in terms of skills and personality, that become plot relevant and interesting to her development and growth. Her desire to reconnect with her former life, damn the consequences, is a major driver of the plot as well.

The worldbuilding is intriguing as well. The world that Emery moves through is a complicated, complex and not entirely dystopic one. The citizens of New Worth, no matter where they live in the vertically oriented city, are, from their own points of view, fighting for a better life for themselves and their city. There is sharp disagreement over what that looks like, and some of the points of view are in the end not palatable at all, but they are relatable human goals  The social aspects of her technology are the focus of the cyberpunk elements of the novel. In a modern social media world we live in today, it is social media and how people related to each other that the author reflects on and refracts into their future society. And all of this in the end feeds with the central question that overhangs the novel, even more than Emery's current problems: Can the outside be successfully colonized? Can the closed box nature of New Worth be changed?

Based on this book, I more than kind of want a version of the computer game Civilization where you start off with one city (arcology) and have to deal with a climate change ravaged Earth. You could even make it go off the rails and into the realms of pulpy science fiction with hazards not seen in the real world. But I think the challenges as the residents of New Worth have to deal with them would be more than enough to fill plenty of gameplay.

Some of the beats in the plotting, though, do feel a bit off, shifts in the terrain of the plot that seem to exist only for the sake of changing things up. Looking back at the plotting throughout, I did realize that the novel carried me through many of the issues I might have had at the time by dint of the strengths of the main character and the world that she inhabits. The novel works best as thought of in the moment as more of a thriller set in an intriguingly different future.

As noted above, the novel gets a lot of love from me for having the temerity to show a future where climate change has inexorably changed the world forever, but the society that has survived that climate change holocaust is not a paint by numbers dystopic hellscape. While New Worth has its issues and problems, the foundations the society are built on are hopeful--the idea that we can outlast the ravages of climate change, and one day, hopefully, return to retake the earth. This puts me in mind of how this novel sits in a space similar to Kelly Robson’s Gods, Monsters and the Lucky Peach where, too, humanity is tentatively exploring the reclamation of the Earth after a long period living in underground arcologies because of the ravages of climate change. It is straightforward, if not easy, to write novels that show a crapsack world ravaged by dystopic climate change and social breakdown. You can even write it well, and deeply (Seed by Rob Ziegler just as one of numerous examples). But it is a much harder tack to try to tackle such a future and come out on the other side with the bottom of

Teffeau’s Implanted manages to do just that.

Penalties: -1 for some discordant notes in plotting