Empire of Sand is an immersive and compulsively readable epic fantasy that draws on traditions and cultures and milieus, the Mughal Empire, a culture and heritage hitherto rarely seen in the Western fantasy tradition. 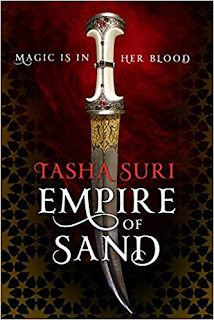 Mehr is the daughter of the Governor of Irinah, the now-province of the Empire that her mother, long since estranged and gone from her life and her father’s, comes from. As he never married her mother, and now has a wife from the core of the Empire, the status of Mehr, and her younger sister Arwa is illegitimate and thus constantly imperiled. Her stepmother has very strong ideas what it means to be the daughter of the governor, and her control over the household, and the lives of Mehr and Arwa is ironclad. Worse, the sisters are of a persecuted and despised minority, the Amrithi. The desert dwelling Amrithi are treated with fear and scorn for the magical power in their blood, a power that Mehr does not think she shares herself, even as she tries to live within the traditions of their culture as best she can. But when Mehr’s very real ability comes to the forefront and manifests, the Empire suddenly has a use for Mehr, and a fate that she may not be able to escape.

This is the story of Tasha Suri’s debut novel, Empire of Sand.

Mehr and her story are the heart of this story. The novel opens with building up her life within the world of the Governor’s Palace and how her status is on the edge of a knife. Her absent birth mother, her stepmother Maryam, Arwa and her relations with the servants of the palace and people beyond provide a relationship map that helps define and highlight Mehr in the early stages of the book. Later, we meet her father, and we meet the man whom the Empire has determined she will marry, Amun. As the setting of the novel moves from the palace to the temple that the Empire has sent her, the relationships and connections around Mehr change sharply, and it is Mehr’s need to remain true to herself, even in a very foreign place, where trust is a dangerous card to play.

Empire of Sand reminded me as I started to read it and progressed deeper into the novel,  of Kare Elliott’s first Spiritwalker novel, Cold Magic. Non-European culture, check. Young female protagonist with the potential from a heritage she does not understand with supernatural ancestry, including an absent birth parent. Check. Growing up in a relatively sheltered and enclosed locale, and then taken away from that locale by means of an unexpected, forced marriage to a mage, whose relationship is thorny and a subsequent plot driver. Check. I do think that readers who enjoyed the Spiritwalker series would really enjoy what Suri does here in Empire of Sand.

The world that the author portrays is also fresh and interesting and something new and different. The author was inspired by the Mughal Empire in Northwest and North India for the cultures and society we see in the novel. Using that template, we are portrayed a world of a grasping empire, seeking to conquer all and sundry, including cultures and kingdoms very different than the center. Setting a novel in a distant desert province of an Empire doesn’t *sound* new, but there is a rich authenticity that is portrayed on the pages. With sleeping gods, supernatural beings, and the reality bending Dreamfire storms that periodically afflict Irinah and beyond, it is a rich and well developed world. From the corridors of the palace, to the stark beauty of the desert, to the temple of the Maha, all of the locations that Suri invokes in the novel richly put me as a reader into the setting. I particularly liked the daiva, which we meet early in the novel, and their ties and connections to both humans and Gods a mystery and piece of the world that is slowly revealed as the plot unfolds.

While I see the necessity of the strand, I think that the chapters where we break Mehr’s point of view to show other points of view, particularly her friend Lalita, do not feel as crisp and does not feel as deep, as the main narrative with Mehr. This secondary strand does provide for a lot of shorthand for when that strand finally intersects Mehr, but I don’t think the story in that strand is anywhere near as cohesive as Mehr’s story. I was always ready to go back to Mehr and what she was doing, instead. I had a lot of buy in to her story and her relationships, much more than any other character.

Overall, Empire of Sand is a rich and very promising debut in a world with a central character that I want to know much more about. Empire of Sand delivers on fantasy “Beyond the Great Wall of Europe”, and in spades.The ending of the novel makes it clear that this is the first in a series, but the ending of this novel is a satisfactory one for those who want an “off ramp”. A complete, and most excellent story, is told in this volume.

Bonuses : +1 for a strong main character with believable and deep relationships
+1 for rich and immersive worldbuilding

Penalties : -1 for less effective switches in point of view that do not resonate as well as the main narrative.