As an SFF fan who gravitates towards novels for the bulk of their reading, I am now used to the annual panic of reaching the end of the year, when recommended reading lists start coming out and people start thinking about their Hugo nominations, and realising that I've barely scratched the surface of the excellent short fiction that has come out. In the second half of this year, I've got better at doing something about it - I've taken some time to curate and make sure that I'm reading the subscriptions I have, in formats that I like (i.e. ebooks - web-based fiction reading is a big nope for me). I'm happy to report that the effort has paid off, and it means I have some recommendations to share!

Not So Stories, edited by David Thomas Moore 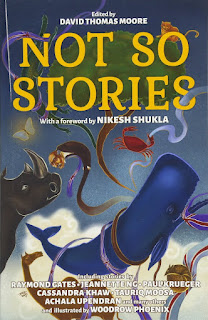 As the name suggests, this collection from Saga Press riffs off Rudyard Kipling's Just So Stories, but through a lens which explicitly addresses and unpacks the colonial legacy of those stories and the wider implications of having a white Edwardian impose and define the folklore of another continent for generations of young people. The result is a mix of "animal fables" and human narratives, with the defining thread being about stories and storytelling rather than the exact form of the Just So Stories. Although the jumps between "timeless" animal fables and more contemporary tales are a little jarring at points, this is still a well-curated collection that was very easy to get through in one sitting, and there's a range of talents on display here. For example, "How the Ants got their Queen" is, on the surface, a straightforward retelling of the history of colonialism and of the history of nations after the colonial power leaves, but the style and the reimagining as a story of ants and pangolins makes it one of the strongest stories in the collection. "Queen", by Joseph E. Cole, is another great entry (and an author debut!), telling of a meeting between the Queen and a young girl, and the story which the Queen imparts. There's also some wonderful "lighthearted" entries including "How the Camel Got Her Paid Time Off" by Paul Krueger, "How the Tree of Wishes gained its Carapace of Plastic" by Jeanette Ng, and Zina Hutton's cat-based story of gods and belonging, "Strays Like Us". 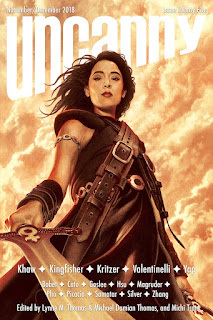 Uncanny is an institution with a deservedly beloved place in genre fiction at the moment, and this, the first issue in their fifth year of operations, is about as close to perfect as I can imagine a single magazine issue being (a feat which is particularly impressive given it comes on the heels of the Disabled People Destroy Science Fiction issue, which also had a great deal to recommend it.) In "How to Swallow the Moon", Isabel Yap kicks off the issue with a fairytale retelling drawing on Filipino myths about the bakanawa - a moon-eating serpent - as part of a queer coming-of-age love story with twists that will be satisfying to anyone who enjoys this form of myth-exploration. There's also a T. Kingfisher story which is sure to be an instant hit, particularly with those who like the more ribald notes of humour in her other work. "The Rose MacGregor Drinking and Admiration Society" is based around various males of the magical persuasion getting together to commiserate about Rose, the woman who got exactly what she wanted - without any pesky heartbreak or murder - out of their various fey liaisons. Also in the issue are a Sofia Samatar reprint, some great short fiction from Monica Valentinelli and Cassandra Khaw, and an insightful essay about Diana M. Pho about how writing fanfiction has shaped their work as an editor (and some poetry, which I'm absolutely no good at analysing the quality of, but hey, poetry!)

For me, though, the standout was "The Thing About Ghost Stories" by Naomi Kritzer: a story about a researcher who catalogues stories of the supernatural, and how this leads to final contact with her mother, who recently died after a period of living with Alzheimer's. Kritzer has such a wonderful light touch as an author, letting the main character cope with the grief of losing her mother -- to an illness where much of her was already "lost" before her passing -- in a way that feels real without being heavy. I think short fiction soars when stories pair interesting supernatural (or science fictional) ideas with evocative emotional content, and Kritzer crafts an outstanding example of that here.

Awakenings, edited by The Book Smugglers. (Read online for free!) 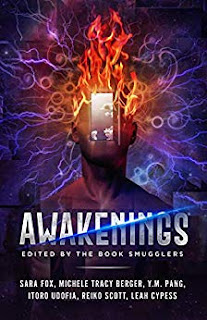 Like many, I was sorry to see the Book Smugglers' announcement that their publishing wing will be closing at the end of December, but 2018 is a hell of a year for them to go out on, with six strong stories ranging from short to novella, all collected in this year's-end anthology. It's a lineup that showcases what I like most about the Book Smugglers' editorial line: their eye for diversity, for emotionally driven stories without easy answers, and for young adult themes like coming-of-age within the short fiction world. As you'd expect, "Awakenings" gets a pretty broad interpretation across the stories here, which range from epic fantasy to alt-historical first contact to transhumanism and stories of magic school. It's perhaps a more painful collection than I was expecting; it turns out some "awakenings" lead us only to death or pain, and others can be ambiguous at best. Still, nothing feels forced or unearned, and if one story ("Timshala" by Leah Cypess, the only novella of the bunch) feels like it ends right at the point the fun should start, that's a narrative decision that's given plenty of in-text justification.

My favourite of the six is the first: "When the Letter Comes" by Sarah Fox, a story about being left out of easy magical answers and having to work through your own transformation - and the power that brings. Also worthy of note is the deeply unsettling novelette "Nussia" by Michele Tracy Berger, which is probably the best story here, but gave me stomach ache with its unforgiving vision of an alien teenager's highly publicised stay with a Black family in the 1980s. The Awakenings stories are all available for free online but, at least until the end of the month, you can also avail yourself of the handy collected version, which also puts insightful author interview after each story. 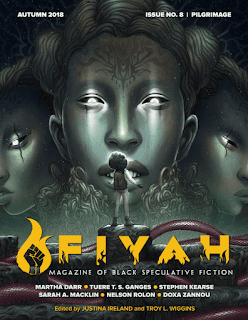 The theme of this FIYAH issue is pilgrimage, and its a topic that brings out an impressive and very different quartet of stories. "Bullet", by Stephen Kearse, tells the story of a pilot flying a "bullet" ship designed to destroy an entire planet across two years of space, and their attempts to either sabotage or come to terms with the journey they've decided to undertake. In "Magicians Trial" by Sarah A. Macklin, a young woman returns to the birthplace of humanity to take the test that will allow her to become a sorceress: a test that requires her to confront and address different aspects of herself. It's not spectacularly original, but Macklin handles the tropes well and those who enjoy fantasy coming-of-age stories will find satisfaction in how she allows her protagonist to triumph after solving the puzzles put in front of her.

Then there's "Pedaling", by Tuere T.S. Ganges: a story very much in conversation with Octavia Butler's Parable stories (to the extent where they could plausibly be set in the same world), about a diverse group of teenagers travelling a lightly post-apocalyptic society trying to survive and to support those they meet. The use of Butler's "so be it, see to it" affirmation, and the care and community which the teenagers bring to each other - completely subverting the usual stereotypes that would be attached to a gang of teens of colour in a world like this - was heartwarming, and the plot gives them a nice way to showcase their talents and humanity against a deliberately two-dimensional white supremacist enemy. Rounding out the prose fiction is "Saudade", a story of survival in a post-spaceflight Korea, which I liked least of the four but still more than holds its own. (There's poetry too, including a great take on the Rapunzel myth by Doxa Zannou.) 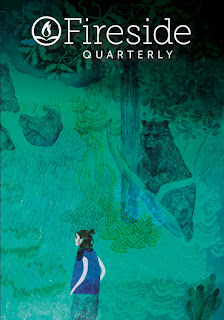 Fireside's fourth quarter (which, for full disclosure, I read through a monthly ebook subscription rather in their physical "Fireside Quarterly" issues, although I envy all who receive the latter!) contains one S-rank among all the As: "STET" by Sarah Gailey, an unusual piece told in the form of marginal editorial comments on the first page of a journal article. Contained within this inventive structure is an excruciatingly good - and bitter - tale about artificial intelligence and the value of life in a world of machine learning and algorithms. The story also effectively addresses the tensions between lived experience and "professionalism", as the author of the article struggles to retain her rage at the technology they are writing about in the face of editorial concern that wants to separate their individual, emotional identity from the argument they trying to make. To say more would be to spoil the effect of the piece itself, which you honestly just need to read immediately.

That's not the only thing to look out for this quarter, of course. In "And I Never Named Her" by Renee Christopher, we follow the protagonist on a hunt for a mysterious creature, whose form and identity haunts them throughout the process. "Birch Daughter" by Sara Norja is a fairy tale of rescue and adventure, with bears! "Cleaning Up", by Brian M. Milton, is a fabulous tale of supernatural janitorial heroics, with a bonus talking cat. And December also brings a reprint of "All The Time We've Left to Spend" by Alyssa Wong, which was one of the outstanding stories from the Robots Vs Fairies anthology from earlier this year.