Fright vs. Fright: The House of Seven Gables 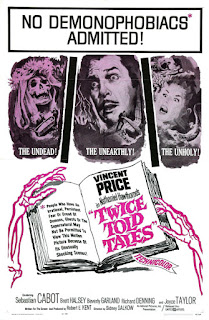 The Plot: Twice-Told Tales is an anthology film, like many that were produced around the same time period, including Tales of Terror and Dr. Terror's House of Horrors. In this case, each of the three stories are inspired by the writing of Nathaniel Hawthorne. although only one of them actually comes from Hawthorne's short-story collection of the same name. The longest of the three, and most elaborate, is "The House of Seven Gables." In it, Gerald Pyncheon returns to his family home with his new bride Alice in order to try to find a treasure rumored to have been hidden when the house was constructed. But that construction wound up with the house falling under the curse of its maker, since Pyncheon's ancestor decided to accuse the architect, Matthew Maule, of witchcraft rather than pay him. Now, Alice begins seeing visions of Matthew and feeling drawn to Jonathan Maule, Matthew's descendant. All the while, Gerald's sister Hannah keeps reminding Gerald that he shouldn't have come back, since all Pyncheon men are cursed to die "with blood on their lips." And a painting of the first Pyncheon hanging on the wall in the study keeps bleeding from the mouth, and Gerald's drinking water keeps turning to blood. Just in case he didn't believe in spook-stuff. When Gerald thinks he's finally onto the treasure, he gets a little bloodthirsty (in the more traditional sense), and it becomes less and less certain that anybody will get out of this mess alive.

The Good, The Bad, The Indifferent: Twice-Told Tales is one of my favorite Vincent Price movies, and one I come back to almost every year around Halloween. The first two stories — "Dr. Heidigger's Experiment" and "Rappaccini's Daughter" — both have a lot of pathos and interesting twists, after a fashion. But "The House of Seven Gables" is all mustache-twirling scheming and ghost retribution. It amplifies the supernatural elements hinted at in the original story, and is short enough that in stripping away almost all but those elements, it's just Code-Era Hollywood gory fun. I'm wracking my brain to find something negative to say about it, but if you like this kind of thing, it's pretty great. But it is very much this early-60s horror vibe and not much else, so if that's not your bag, you'll probably be left flat. 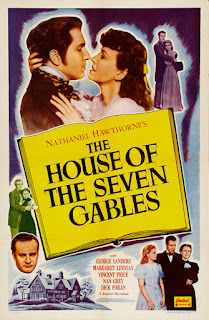 How It Stacks Up: Watching this movie was kind of a joy. I realize that both versions share the same source material, so the 1963 version isn't directly inspired by the 1940 version, but that both of them feature Vincent Price in the lead, in two different roles, in two very different films made over 20 years apart was a lot of fun to see. This 1940 version hews much more closely to the source material, and any trace of the supernatural is circumstantial at best. Hawthorne was vexed by his family's involvement in the Salem Witch Trials two centuries earlier, and so his characters need not turn to the supernatural to do evil (even if they do invoke it for personal gain). There's no blood, really, and no horror, come to that, apart from how basely a man may treat his (literal) brother in the name of greed, so this film falls much more in line with films like the subsequent Portrait of Jennie or the Orson Welles/Joan Fontaine Jane Eyre (both the same decade), which you might call supernatural-adjacent, Old Hollywood romances.

Worth a Watch? Seeing Vincent Price play a romantic lead only two years after he made his first film is definitely worth a watch. It's not spooky, so maybe skip it for Halloween and go with Twice-Told Tales, but for sure put this one on your list for when that old-movie itch hits you.

Fun bit of connective tissue: Vincent Price, who featured last week in The Fly, brings us back to this film. So while it was completely unintentional, each of the films in this series has been connected by a performer. That we began and ended with Vincent is just icing on the cake.

Posted by Vance K — cult film reviewer and co-editor of nerds of a feather, flock together since 2012. Perennial watcher of dozens of horror movies each October. Does not live in a haunted house, despite what his son's friend thinks (look, kid, it was just the cats...).
Posted by vkotrla at 12:00:00 AM