Microreview [film]: Fiend Without a Face 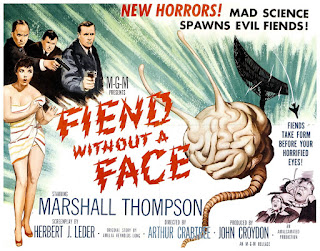 Look, I’m going to cut to the chase — you’re going to want to watch this movie for the last fifteen minutes, when killer brains start attacking all the stock characters. Before that, it’s pretty standard fare.

There’s a wonderful scene in Ed Wood where Ed pops in to see an old editor on the studio lot that just got a batch of stock film, and Ed laments it all ending up filed away, saying,


“Why, if I had half a chance, I could make an entire movie using this stock footage. The story opens on these mysterious explosions. Nobody knows what's causing them, but it's upsetting all the buffalo. So, the military are called in to solve the mystery.”

The reason why I love that line so much is because it almost perfectly describes so many actual, low-budget sci-fi movies from the 1950s. In film after film, the entire first reel is just stock footage of various military exercises and two guys in Army uniforms in a nondescript office describing some mysterious problem. Fiend Without a Face is no exception. The problem the guys talk about in the nondescript office is the locals complaining that the nuclear tests from the base are messing up milk production from the family cows.

Little do they know there’s a bigger problem brewing. I’ll keep it simple and just say the nuclear tests don’t play well with a local professor who has been perfecting his theory of telekinesis, and an invisible killing machine that sucks out its’ victims brains is the result.

When those brains reappear at the end of the movie, it is more than worth the wait. They still have the spines attached, and have grown these sort of eye-stalks, like a slug. They can climb, these brains, they can jump, and they can ooch along the floor. They can also, when shot with an Army .45, make a disgusting gurgling sound and belch out black goo. We’ll call it telekinesis goo.

This movie has been called the goriest of its era, and I won’t argue that point. If you think sentient, malevolent, crawling — and then exploding — brains are up your alley, not only are you my kind of person, but you should probably also put this movie up at the top of your list.

Bonuses: +2 for all the stuff I said about the brain monsters, +1 for the line, "You ever consider trying sleep instead of Benzedrine?"

Penalties: I think I've made it pretty clear what to expect

Nerd Coefficient: 8/10 (which is pretty dang high, given our scoring system)

Posted by Vance K — cult film reviewer and co-editor of nerds of a feather, flock together since 2012, folk musician, and Emmy Award-winning producer.
Posted by vkotrla at 12:00:00 AM