Microreview [book]: The Librarians and the Lost Lamp by Greg Cox 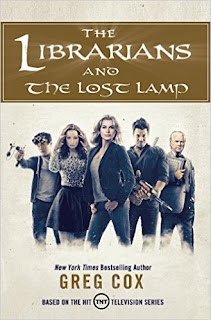 It’s no surprise that I am a big fan of TNT’s The Librarians. Sure, it’s campy in that 90's A Kid in King Arthur’s Court kind of way, but it is self-aware and constantly pushing boundaries. The kick ass military Colonel tasked with guarding the lives of the Librarians is none other than supermodel Rebecca Romijn. The math wiz is also female and the art and humanities expert is rough and tumble cowboy. There was even one episode where Cassandra was transformed into prince charming, with women swooning over her left and right. Needless to say, when the opportunity arose to read Greg Cox’s The Librarians and the Lost Lamp, based on the show, I couldn’t resist.

From the start, reading this book is like watching an episode of the show, and Cox absolutely nails the feel of the setting and the characters. The story jumps around in time between a Flynn mission in 2006 and a today mission with the present day Librarians. Both missions involve tracking down Aladdin’s lost lamp before Ali Baba’s Forty Thieves (a.k.a. The Forty) find it. There are flying carpets, famous book fragments, lost tombs, and everything else you would expect from a campy magical artifact retrieval tale. The book is fast paced and very well written, and can definitely satisfy a rainy weekend, despite being completely predictable (think Indiana Jones and the Last Crusade).

Now, there are plenty of mysterious, lost, and rumored magical artifacts to choose from for all walks of culture. But at a time when even mentioning the Middle East raises taboo flags, and those from there are being shunned and discriminated against by many in Western society, Cox and the Librarians chose to write about Middle Eastern mythology. Flynn’s story begins with him arriving in the Baghdad Green Zone in 2006, to investigate a raid on the National Museum of Iraq where a priceless artifact, the oldest known copy of Arabian Nights, was stolen. The museum curator he meets with is female, and her danger is real as she is almost abducted on her way home for having stopped to by some spices at the market. As I read about her and Flynn trying to hide from the Forty in the Green Zone while military helicopters roved overhead, and them eventually being smuggled to Iran in search of lost pieces of Islamic culture, I couldn’t help but think how poignant it is that this topic was chosen. It would have been easy and safe to write about the Librarians searching for Aphrodite’s magic girdle or one of the hundreds of other magical objects of Western culture, but Cox and The Librarians, never ceasing to push societal boundaries, chose to remind us that “the history of Iraq is the history of mankind”, which is something we should never forget.

Baseline Assessment:  6/10
Bonuses:  +1 for being a fast and fun read, +1 for continuing to push boundaries
Negatives:  -1 for complete predictability
Nerd Coefficient:  7/10 "an enjoyable experience, but not without its flaws"

---
POSTED BY: Tia  lover of campy mythology tales and nerds of a feather contributor since 2014