Microreview [novella]: A Taste of Honey by Kai Ashante Wilson

This novella will pull out your heart, show it to you, and then put it back better than ever. 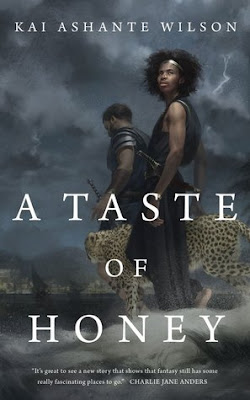 I'm not hugely used to reading novellas. Which is a shame, because as this one shows the form allows for an intensity and a depth that is harder to maintain over a novel-length work while still being able to stretch with a vivid world-building and complicated plot that would have felt rushed in a shorter piece. This story nails what makes novellas exciting—presenting an emotionally resonant, stylistically complex, and expertly paced story that can be devoured in a single sitting.

The story jumps back and forth through time, revealing a setting that is rich, dense, and very strange. While at first blush the story seems to borrow from North African and Roman aesthetics, the similarities kind of end when aliens get involved, beings who are able to provide some of the civilizations with vast resources and technologies, but not without a price. In the past, Aqib is the son of the Master of Beasts and has an affinity for animals, something that he takes for granted but that, in the future portions of the story, take on another level entirely. In the past, Aqib has fallen for a foreign soldier, Lucrio, despite the taboo in his own culture, despite the criminal nature of the acts of love he participates in. In the future he is married to a powerful woman, is a prince with a daughter, and yet for all his fondness for his wife and devotion to his daughter, he always has to deny himself, can never fully express his sexuality and has to stand by while he witnesses a similar stifling in his daughter.

The story takes a great look at how cultures pressure people into denying themselves. Not just through the laws and punishments but more with how Aqib's family treats him. His relationship emboldens him because it affirms him, something that his family hates, something that they try to stop. They try to threaten him, to cajole him, to gaslight him, to convince him to give up this part of himself that they don't appreciate, that doesn't serve them or their interests, and the story is sensitive to how insidious that can be. How difficult it is to deal with family and love and loyalty and fear and support. In the future, his attraction to men is something that Aqib has to purge entirely or risk death and worse. But in the past he has this taste of freedom and is forced to make the wrenching choice of what to do. And the story set me up so well to break my heart, to stab me right in the feels and then twist the knife. [SPOILERS because I kind of have to talk about this…] And then…it didn't. Through a very clever narrative choice the novella chooses to twist quite hard at a key section and completely rewrite the trajectory of the story to that point.

One of the genres that the novel lists is gay romance, and I appreciate the ways in which it complicates the tropes associated with that. This is not a very happy story. It's a story about fear and the threat of exposure and death. It's a story about erasing a part of yourself in order to be safe. It's a story about love failing to overcome. Until it's not. I'm not going to argue that this isn't gay romance. It hits all the requisite points, up to and including the happy ending. But this is not a story for people looking for a familiar gay romance. Through a beautifully speculative setting these character reach for each and are torn apart, then put back together again. It is affirming and lifting and joyous, but it's also difficult and gritty at times. And it did kind of pull the rug out from under me. It's an emotional roller coaster that left me breathless, elated, and a bit raw.

At its core, though, I think it's about speculation. The danger and the cost of it, as Aqib learns, of looking back and wondering how it might have been different. Worrying that maybe he made a mistake in doing what he did. But also the power and freedom of looking forward and asking "what if?" What if I don't have to live in fear? What if I can be free? And finding strength in that to take dangerous action, yes, but also to overcome it and reach a place of peace, safety, and love. And it's a devastating examination of what makes speculative fiction so compelling, exploring the possible worlds actions can create and forcing the reader to confront what those possibilities imply about our own world.


Negatives: -1 for breaking my heart

Bonuses: +1 for unbreaking my heart and +1 for the complex mix of fantasy and science fiction