A couple of weeks ago on this site, a few of us got to talk about diversity in genre fiction. In the climate we find ourselves in this week, affirming that embrace of diversity seems particularly important.

We don't really address electoral politics on this site, but certainly a couple of elections in the United Kingdom and United States have touched on an ongoing discussion within genre circles — that of increasing diversity and the response to it.

There are so, so many reasons why genre fiction, movies, comics are great. As much as going to a made-up world can be an escape (and it certainly can be!) from the one we live in — which is often scary and confusing, hurtful and unfair — genre stories, regardless of medium, can be an invaluable lens through which to look at and understand our own, real world and our lives in it. For me, Slaughterhouse-Five, about a man who comes "unstuck in time," forever changed the way I exist in the world.

But beyond that, it can give us a community. Fandoms built around genres, or shows, or movies have given people real and virtual communities around the world. If you're a guy who's terrified of letting anyone in your small town know you like My Little Pony, you can commune with people across the country who are just as passionate about it as you are, and won't judge you for digging it. I can tell you that, for me, lining up in a queue that stretched down the block and around the corner to see Bubba Ho-Tep let me know that I may be weird, but I was not alone in wanting to see a movie where old Elvis fights an ancient mummy who sucks souls out of retirees' butts. And this site, and our team of multi-national writers, only exists because we all geek out over genre stories, comics, games, what-have-you.

Speculative fiction can give us community, and it can give us a voice. If you have a story to tell, I want to affirm that it matters. It may not be good...I mean, you might not be a very good storyteller. Most people aren't. But that doesn't mean your story doesn't matter. Are you struggling with your identity? Tell your story. Are you excited by things that blow up? Tell your story. Do you feel like you don't fit in? Tell your story. Do you feel like your way of life is disappearing and you don't know what the future looks like? Tell your story. Are you scared? Tell your story. Because you are not alone in any of those things, and if you put your characters in a spaceship, or on another planet, or give them a magic staff, we'll read that shit. And other people who want to write the same kind of stuff will be your beta readers and give you notes for no other reason than we are nerds of a feather.

And finally, these stories can give us hope. There's a lot of dystopian sci-fi and grimdark fantasy, and that all has its place. But there is also the aspirational. There is Star Trek and there are visions of worlds and lands and times that have solved the problems we are still grappling with. These stories can give us visions of better worlds that we can strive to make ours look like. And that's not nothing.

A lot of people are worried right now. I'm worried. I feel like I'm outside, looking in at something I don't understand at all. But I'm a nerd, and that means I've got experience with this feeling. It's different this time, I won't pretend it isn't, but I know that I'm not alone, and you are not alone, and we may not be able to protect each other all the time, but we can embrace each other, and that's not nothing, either.

Besides, if "normal" is what we've seen in these elections, give me different. 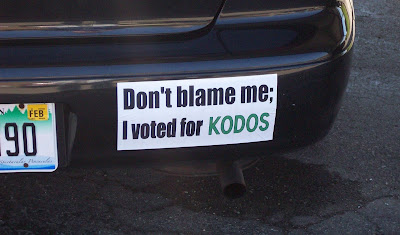 Posted by Vance K, cult film reviewer and co-editor of nerds of a feather, flock together since 2012. Folk singer and Emmy award-winning producer.
Posted by vkotrla at 12:00:00 PM