Summer is here, and that means fond memories of long-ago encounters with great (okay, probably not that great, but they seemed so at the time) books pilfered (or, you know, just loaned, mostly) from the library in the twilight before racing (more of a tortoise than a hare, to be honest) back home on my bike: the perfect end to perfect summer days! And aside from the library part, which is now out of biking range (i.e., I’m too lazy to go to libraries or bookstores or, in fact, anywhere, nowadays) I still feel there are few pleasures greater than a well-crafted, intriguing fantasy or science fiction novel to be sipped or gulped down in “those summer nights”, as John Travolta would warble. Will I get through all of these? No idea (some idea, actually: probably not), but I relish the challenge! (And that’s another thing I love: relish! Mustard/ketchup...ugh! What is it good for? Absolutely nothing!)

Yeah, the Matt Dillon one, but with words and pages and stuff, not Netflixery. Actually, I’ve already finished this book, and found it interesting if a bit uneven (or to put it in a more flattering light, it had a surprising structure); overall, I liked it enough to be annoyed by the subtle yet enormous changes from book to screen. I also liked it enough to add…

The just bearable hopelessness of the first book was intriguing enough to pique my curiosity: how will things develop in the horrid little town? How will the Burkes adjust to their idyllic prison? Is there any real future for the entire enterprise? I want to see how Crouch tunnels his way out of the dark-as-can-be pit of despair he left Wayward Pines in at the end of book one. Come to think of it, maybe he should change his name to “Bleak”…

Because how could I not read it? I loved the first book in this new series (and, indeed, everything by Jemisin), and have high hopes for the second. I won’t be reviewing it at NOAF, because I’m not alone in my admiration for Jemisin, but that won’t stop me from reading it—in fact, nothing could possibly stop me!

I’m trying to become shallower, more impulsive, and capable of baseless snap-judgments, so I base most book decisions these days on—you guessed it—the covers! Summerlong’s is delightful, and has raised my expectations quite high. But aren’t I just setting myself up for disappointment, you say? Maybe…but it’s the world’s fault for making such a pretty cover J

5. Where We Go When All We Were Is Gone, by Sequoia Nagamatsu

Intriguing title, and plus it’s based upon Japanese folk tales and legends, of which I am something of a connoisseur (or at least I aspire to be). On the potential minus-side is the fact that this is a collection of short stories (and unlike idiots like Edgar Allen Poe, I utterly reject the idea that a story should be short enough to enjoy in a single sitting—quite the opposite, in fact), but some of them are apparently about kaiju, and everybody loves kaiju! This is the perfect segue into… 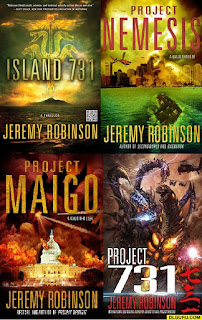 6. The Kaiju series, by Jeremy Robinson


They say you shouldn’t read books by people you know (actually, I have no idea if ‘they’ say that, but I just felt instinctually like it was a bad idea), so for a long time I resisted the urge to read anything by this guy, who I knew as an older acquaintance/family friend long ago, in the halcyon days of my childhood. Then I tried reading something by him, and didn’t really like it, but it was the first book he’d written, and it didn’t seem really fair to judge him by his earliest effort (though that didn’t/doesn’t stop me from roundly condemning Patricia Cornwell and the cringe-worthy Postmortem—maybe the Kay Skarpetta series got better after that, but I certainly hope it didn’t manage to get any worse!). So I thought I’d give Jeremy another try, and somewhat randomly selected this Kaiju series. I’m a bit of the way into the series now, and am not at all disappointed—he’s really upped his game, as even if the story is somewhat familiar/well-trodden ground, the quality of the writing is top-notch, especially the “as ___ as ______” descriptive one-liners! Best of all (though not for the unfortunate characters caught by the monster thereabouts), much of the action takes place near, and a few scenes almost within sight of, my childhood home!

This list brought to you by Zhaoyun, ruthless devourer of fantasy and sci-fi novels and films since primordial times, and reviewer for Nerds of a Feather since 2013.
Posted by Zhaoyun at 12:00:00 AM