A huge collection of SFF stories with a focus on language 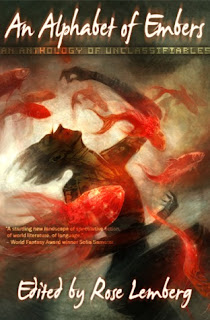 In some ways this is a difficult collection to compose thoughts about. First and mostly, because An Alphabet of Embers is quite large. Like the letters in an alphabet, each story is small but intricate, and each is different. Together they form the building blocks on which language exists, and so I think my first reaction to reading this collection was being intimidated by it. By its layers, by its strangeness, by the innovative way it approaches language and image and meaning. Ultimately, I came back to the first story in the collection, Emily Stoddard's "Outfitting the Restless Heart, or How the Sky Was Made." I think that first stories are very important in anthologies, because they set the tone. And the more I thought about it, the more I saw what a great choice this story was for this anthology. It's a tale that to me speaks of being confronted by the vast, by the wide open space of the sky, and finding that you can fill it. That its vastness is no larger than your own. The story is told in the second person, is told to narrator and to the reader. That here is a collection that is deep and might seem at times too large or too strange or too impenetrable. But that you and me, the readers, can meet it, can grow because of it. It's a lovely story and a great way to think about approaching this collection, not that it's too large or too formally or linguistically challenging, but that it represents a space to grow into as a reader.

An Alphabet of Embers was not, for me, an easy read. The stories are short but dense and very impacting, so that sometimes reading felt like getting hit by very beautiful little bricks, devastating but rewarding. Stories like "Mistletoe and Copper, Water and Herbs" by Mari Ness, about promises and sacrifice, strike with a ragged edge, the character's desperation and grief thick as congealing blood. Or "Telomerase" by Ian Muneshwar, about terminal illness and love and the inability of words to wrap around certain feelings, certain tragedies. Or "The Binding of Ming-tian" by Emily Jiang, which felt to me about frustrated love and the cycle of violence that is tradition, that is systemic oppression. Or Nin Harris' "Moult," about transformations, shedding skin. The story follows through a series of changes, moultings, each bringing the main character on a journey inward, tearing away the different affectations and defenses that the world necessitates, each layer revealing something new, something beautiful.

There were also stories that were just plain fun, and the collection as a whole did a nice job of balancing the light and the heavy, the sinking and the lifting. "Transfers to Connecting Flights" by JY Yang is a sweet tale of transferring bodies and a love that won't die, that can't die, regardless of how much time must pass. And "Everything Under One Roof" by Zen Cho offers up a story of memory and food and friendship, the idea that the past is a place you can visit, but not something you can eat. "Single Entry" by Celeste Rita Baker has a jubilant voice cut a bit by the dire direction the Earth is being moved to. And "Ekphrasis" by Arkady Martine reveals a poet, part of a vast artificial memory collective, as they court annihilation but also art and creation and change, the most powerful forces in the universe.

There are a lot of stories here, and unfortunately I can't go into all of them. Variety is one of the great strengths of the collection. Most of the things that I struggled with, indeed, were more because of my own failings. Some of the stories were quite difficult for me to parse, and especially because some…well, don't require so much as strongly suggest that the reader have access to the tools of translation. Which, as this is a very internationally minded collection, only makes sense. Similarly, there were a few stories that I just struggled with because of their denseness, because of style or the imagery or the form. Not to the point that I didn't find them interesting or rewarding, but to the point where I personally was convinced I was missing something that refused to reveal itself. But as I said before, this quality also got me to work harder, to dig deeper, and to ultimately take more away from the stories than I would had they been more naturally easy for me.

Which brings me to the last story in the collection, "Only revolutions" by M Sereno, a story that fits very well as a bookend, as a sendoff. Because to me it's about the strength of stubborn refusal to submit. Refusal to let adversity or oppression or even death itself get in the way of love. It's a powerful story and one that echoes the first, that idea that people are larger than they think, more important, more capable. That they don't have to shrink from the challenges, that they can meet them, overcome them, and emerge changed and whole and full of fire. And in the end An Alphabet of Embers represents an ambitious gathering of voices and styles, places and people. It shines, and shines the harder for being daunting, for being unrelenting and unapologetic. And it is definitely something I'd recommend checking out for fans of short fiction or anyone looking to challenge their reading status quo.

Bonuses: +1 for the art! Oh my glob I didn't speak much of it but the art is amazing definitely look at all the GORGEOUS!!

Negatives: -1 perhaps an appendix of preferred translations for some of the non-English words/phrases would have helped me because online translation sites can be…not the best