S.C. Flynn is a long time Friend of the Feather and has reached out to the flock in order show off and reveal for the first time the cover for his debut novel Children of the Different

, which takes place in a post-apocalyptic Australia. The cover is the work of Eric Nyquist. Take a look and then check out the excerpt that follows!

Excerpt from Children of the Different
by S.C. Flynn


The group were getting ready to go on a Wrecking when Arika’s Changing started.


Narrah heard the strangled choke in Arika’s throat and spun around. Arika was lying on the wooden floor of the hut, her limbs tense. Her green eyes turned up in her head and then closed. Narrah gulped. His mouth was dry and his heart was racing as he watched his twin sister turn pale and shiver like rippling water. Her little face looked very fragile under her black shoulder-length hair. The water lily drawn in dots of white clay paint that curved around her left eye from forehead to cheekbone twisted and jumped. Narrah had painted the lily on his sister’s face with his fingers just yesterday. How long ago that seemed now.


Manya had taken care of the twins ever since they had become orphans at five years old. Was Arika leaving him now? Narrah never wanted to feel alone like he had when their parents died. It had been raining that day and the forest was dark. He could still smell the strong eucalyptus scent rising off the huge karri trees that stood like crying gods dripping tears on the little lost humans far below. He and Arika used to think of the giant trees as forest deities. It was impossible not to, having grown up underneath their trunks, squinting into the sun every day to try and see their waving tops tickling the sky. But if they were gods, Narrah thought, then they were just as cruel and indifferent as any others he had heard about in Manya’s stories and in the Settlement’s few books she had used to teach the twins to read.


Narrah glanced at Manya’s wrinkled face and then back at Arika. Yes, it was time, he knew. Arika was thirteen.


Narrah stared down at Arika’s face, normally so like his own but now a set mask twisted by occasional spasms. Each time the nerves under Arika’s skin flickered, Narrah felt a chill run through him. Arika shuddered a little and Narrah jumped. Was she in pain? What was she feeling? Did she know he was there?


Up until a few moments before, Arika had been standing normally and Narrah had been in touch with her feelings, as he always had. The twins had shared their lives like that, from a distance, for as long as they could remember. They called it the Path. It was like a road that linked them. They could walk along it, meet and then sense each other’s precise thoughts as if they were standing together. They used the Path for their most secret and personal things.


Now the Changing had separated them. Since the Great Madness, it had happened to everyone they knew who reached their teens. It seemed to wait inside them until then. The twins had desperately wanted to understand the Changing and find the truth about the Great Madness before their time ran out. And now it had.


For months the twins had talked about it, and Narrah had sensed Arika’s fear while she had sensed his. They had known that girls entered the Changing earlier than boys, and that meant they couldn’t experience it together. Now Narrah could feel nothing of what Arika was going through. The Path had not given any warning that Arika was about to go into her Changing right at that moment, and now the Path was closed. That separation scared Narrah more than he could have expected. The simple wooden hut and the life the twins had always known seemed very small.


A kookaburra’s cackling laugh broke out nearby. Narrah glanced out the window. The chunky brown bird was sitting out there somewhere among the endless trees. The kookaburra always sounded jolly, and Arika used to love watching the family building its nest and the chicks growing up. But the kookaburra laughed just as loudly while it broke the backs of the snakes it ate.


Go here to read a much longer extract.
Preorder: Amazon (US), Amazon (UK) 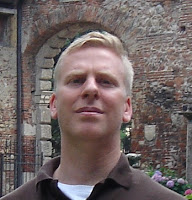 S. C. Flynn was born in a small town in South West Western Australia. He has lived in Europe for a long time; first the United Kingdom, then Italy and currently Ireland, the home of his ancestors. He still speaks English with an Australian accent, and fluent Italian.


He reads everything, revises his writing obsessively and plays jazz. His wife Claudia shares his passions and always encourages him.


S. C. Flynn has written for as long as he can remember and has worked seriously towards becoming a writer for many years. This path included two periods of being represented by professional literary agents, from whom he learnt a lot about writing, but who were unable to get him published.


He responded by deciding to self-publish his post-apocalyptic fantasy novel, Children of the Different and, together with an American support team, aimed for a book as good as those created by the major publishers.

S. C. Flynn blogs on science fiction and fantasy at scflynn.com. He is on Twitter @scyflynn and on Facebook. Join his email newsletter list here
Posted by Joe at 12:00:00 AM