The final entry in a ground breaking series. 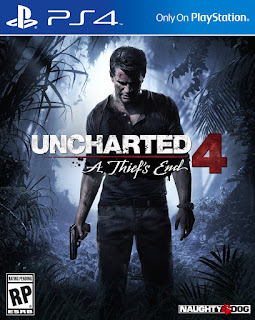 When the first Uncharted came out many moons ago, it cemented Nathan Drake's spot as video game royalty and quickly became of of the killer apps for Sony.  I feel that Naughty Dog does a great job building on what worked in the prior entry, and then adding enough to deliver a new, yet familiar, experience.  Uncharted 4 is no exception and will satisfy fans who have followed Drake's adventures from day 1 or someone new to the franchise.

In this title Drake and company are on the trail of the infamous pirate Henry Avery's treasure.  Estimated at over $400 million, there is going to be some fierce competition to lay their hands on this one.  The game opens with Nate as a teenager living in an orphanage.  It is here that we first learn about the relationship between Drake and his older brother.  This sets the stage to the two of them working with Rafe Adler, a wealthy treasure hunter, to pull a job inside a Panamanian prison.   This job goes about as well as you could expect and we are left thinking that Sam (Drake's brother) didn't make it and the treasure ended up being a bust.

Cut to 15 years later and Drake is enjoying the retired life, from treasure hunting at least, with his wife Elena.  Out of the blue his brother shows up and needs Avery's treasure to pay for his escape from jail.  This sets up the events for this adventure and establishes a nice source of conflict for Drake outside of the usual baddies, his wife.  Rafe is brought back into the picture, using a well paid group of mercenaries who cross paths with Drake and his crew throughout the story.

My buddy Jeff pointed out to me that Drake is a mass murderer and has slaughtered countless individuals throughout his adventures.  Despite a newly added emphasis on stealth, Drake manages to still shoot his way through hundreds of mercenaries and add a significant total to his body count.

The gameplay in this series sticks to what has worked well in the other entries.  Lots of climbing and parkour, intense shoot-outs, but Uncharted 4 places more of an emphasis on stealth and includes some of the most effective vehicle sequences in the series.  While the stealth was done well, the enemy A.I. leaves a lot to be desired.  As someone who doesn't have the video game skills or patience I once had (I am 37 with two children!) I actually appreciated the assist on these sequences.

While the game is overly formulaic, it works really well.  It feels that each chapter opens with some exploration free of bad guys, the "oh shit" moment when they appear, quasi-effective stealth sequence, and very violent shoot-out with Drake and company escaping by the hair on their chins.

I think if I had to sum up this game in one word it would be polished.   The graphics are absolutely stunning as depicted with this gallery from the included photo mode.  Naughty Dog does an impressive job blending cut scenes with actual gameplay and it is a trademark note of this series.  Many of the opening sequences in levels would have worked fine as a cut scene, but in Uncharted you are still in control of Drake and it flips something that was passive and makes it active.  I haven't been immersed in a PS4 title more than this one.  The game engine works incredibly well and the climbing sequences, while redundant, are still some of the most impressive sequences in this series.  The voice acting is on par with a Hollywood film and the overall story is the best thus far, and that is saying something.

Maybe it is because I can relate more to Drake now that he is married and supposedly living the quiet lifestyle, but this is by far my favorite entry in the series and a fitting way to close the book on one Nathan Drake.  May his live on through the world of cosplay at your local comic book convention.

Bonuses: +1 for an amazing cast and the seamless blend of cut scenes and gameplay.
+1 for a fitting end for one of the best modern video game franchises of our time.

Penalties: -1 for repetitive gameplay and dragging out the game just a bit too long.