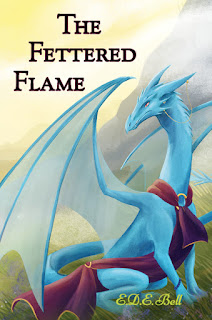 This is the second installment in the Shkode Trilogy by E.D.E Bell. You can read my review of the first book, The Banished Craft, here.

The Fettered Flame picks right up where The Banished Craft left off. President King and his council are trying to recoup Gardenia in the aftermath of an attack, the dragons Empress Zee and General Dronna are trying to hunt down the challenger to the throne, and the human Cor is living on a secluded island with the dragon Atesh, still trying to communicate with ‘mother’ to hopefully heal the fissure between worlds, which is growing more fragile every day.

It is usually a good thing when authors try to incorporate diverse characters and story lines into their writing, but it can sometimes feel forced. Such is not the case with The Fettered Flame. Diversity is woven so seamlessly and effortlessly throughout the narrative that if feels natural... because, well, it is. The female, different skin-toned, homosexual, and cross-dressing characters face adversity, often extreme, but they don’t come off as check marks on a writing to-do list. Instead, these characters are just people (or dragons) trying to exist outside the lines in a rigid society. One of my favorite things about this world is how much more laid back the dragon society is about such things and how they find it odd the humans would do it any other way.

Again, I have to praise Bell for the breadth of character development in this novel. There are some new characters but not many, and those given passing mention in The Banished Craft start to emerge here in The Fettered Flame as interesting and fulfilling individuals. Francie’s story line is perhaps the most engaging and grabs you immediately, and that’s all I’ll say without giving anything away.

We also get to learn a little more about the magic system which is as mysterious as it is intriguing, and I look forward to seeing where certain characters’ arcs are headed in later installments.

Down to it, this is a fantasy story that wraps novel and timely themes around a traditional core. There is a hero’s journey, acted out in parallel by Atesh and Cor, but unlike the traditional tale, our heroes here are doomed from the start. Sure, in them there is a glimmer of hope that the world will be save, but we the reader get the perspective of mother, a being outside the realm in peril, and mother laments that the world is on the brink of collapse and our heroes can only prolong the inevitable.

Once again, I don’t have any criticisms to add. I do prefer the human plot to the dragon one, but I think that is just personal preference and connections with certain characters. If you haven’t read the first in this trilogy, The Banished Craft, I highly suggest you do (buy it here or here) and then go pre-order The Fettered Flame (available September 1), I don’t think you’ll be disappointed.. that is, if dragons and magic and all kinds of awesome characters are your thing.

Bonuses: +1 for treating 'diverse' characters as people and not check marks, and +1 for overall character development