Having recently read and reviewed both installments in the Mistborn series, Zhaoyun and I (Tia) decided to have a chat about the characters, themes, and our general feelings of this wonderful world. You can read my reviews of the original trilogy here, here, and here, and Zhaoyun's reviews of the Wax and Wayne series here and here. 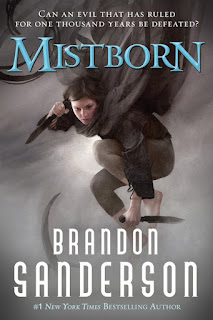 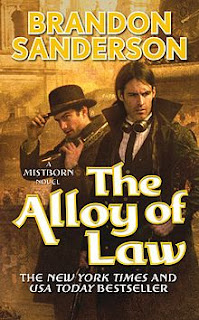 In the first book, of course, Vin was my favorite character. She was my favorite for all the usual reasons, all the reasons we tend to love the young protagonist in any heroic fantasy...namely because we are supposed to. Second to Vin, was Kelsier. I found him mysterious and intriguing, as he was the major source of world building in the first novel. I always had a fascination with Sazed as well, though it’s hard to explain why. I guess he too was mysterious and a source of untapped knowledge. Sazed took over as my favorite character in the second book. His travels and search for information on the hero of ages added a level of intrigue to a story that otherwise didn’t have much going on. In the third book, while Sazed was going through his existential crisis, Spook became my favorite character. I found his passion exciting and his story line intriguing.

But there was a thread running throughout the trilogy that I couldn’t shake, and that was Marsh. Looking back, I think Marsh is by far the most tragic character in the first Mistborn trilogy (or Mistborn proper if you will). When we are first introduced to Marsh, he is enigma. He is someone the crew talks about with an air of respect and awe, but he doesn’t show up for a while, despite having been the one who found Vin in the first place. He is the former leader of the failed Skaa rebellion and the former lover of Kelsier’s late wife. He is, essentially, a man with nothing to lose but hope for a better world, which is something he holds on to, no matter how tenuous the grasp, until the end. Kelsier may have sacrificed his life for the people, but Marsh sacrificed his humanity. He put himself at great risk to infiltrate the system, he permanently disfigured his body--an act he knew there was no turning back from--and then was transformed into a non-human magical, somewhat evil, creature. But through it all Marsh found a way to hold on to a piece of his old self, and he never gave up on his mission. At the end, it was Marsh who saved them all by ripping that darn earring out of Vin’s ear. So, across all of Mistborn proper, I’d have to say that Marsh is my favorite character.

I liked Vin way more than any other character, so much so that I was crushed and not a little disappointed when she a) started wasting her time with Elend, and b) became a glorified guard dog for him. I see what you’re saying about Marsh, but to me Kelsier, whose own death is so meticulously self-planned, is an even more impressive semi-tragic figure. Everything was taken from him, but still, with a savage smile, he continued to struggle, even outwitting the Lord Ruler (in a sense) in how he chooses his death. My least favorite character of the series, meanwhile, is Ruin, as there doesn’t seem to be any reason to personify destruction in such an insidious way. N.K. Jemisin, for example, personifies chaos/destruction (Nahadoth) in a far more amoral, and appealing, way in her Hundred Thousand Kingdoms series, but with Sanderson’s characterization, nobody can harbor any doubt that Ruin is pure evil, supervillainy personified.

On the other hand, Sanderson’s treatment of the Lord Ruler, and the unexpected complexities of his character, was a pleasant surprise. He may not be the sort of person you’d invite over for tea, but his faltering attempts to solve the planet’s problems in his few moments of godhood certainly sounded plausible to me, and his tinkerings with hemalurgy are remarkable (if cruel). In Sanderson’s world-building, to every evil act or concept there is a saving grace, so for example the kandra balance the Inquisitors/other yucky Hemalurgic stuff. But then even within the kandra there is a spectrum of morality...this brings me to my second-favorite character of the original trilogy, namely Ten Soon. Ruff ruff!

Elend sucks, and the stupid deus ex machina of the magic pebble that turns him into a mistborn (indeed, one supposedly more powerful than my beloved Vin, no less!) was infuriating. If Sanderson wanted to make the point that non-magical characters are people too, he should have stuck with Elend as an Inspirational Figure, but instead he cheated and gave him enormous powers too. I couldn’t really buy the love story between him and Vin, because of the huge gap in awesomeness-and I’m not talking about Allomancy, either!

I gather you haven’t read the Wax and Wayne trilogy, set hundreds of years after Vin’s lifetime? My understanding of Allomancy--and Hemalurgy--as well as the Cult of the Survivor is colored heavily by the mythology that has sprung up around Kelsier (and others) in the intervening centuries, and I was quite impressed by the way Sanderson eventually wove that mythology back into the story, especially in the third Waxillium book (and sixth overall in the Mistborn universe). That book is, I would (and have) argue(d), the best set in the Mistborn world since the original Mistborn book, because in it Wax et al have finally come into their own as nearly as interesting as Vin and co. were in book one.

I agree that Kelsier is also a tragic figure, and if my assessment were based solely on the first book, then I would say yes, he is the most tragic. I really felt Kelsier’s absence in the remaining installments, as of course did many of the characters themselves. We don’t get a lot of Marsh either, but every time he showed up I felt a little pang. Yes Kelsier meticulously planned his own death as an intended sacrifice, but Marsh got way more than he bargained for and still never gave up. I also agree that Ruin as the personification of destruction is quite superficial, and I found it particularly strange and confusing (but at the same time mudane) that bodies fell out of the sky when Ruin and Preservation “died.”

I’m glad that I’m not alone in my detest for Elend. It’s a shame because he really wasn’t that bad of a character in the first book. I still hold to the notion that the story would have been a lot more compelling if Vin’s and Elend’s ‘love’ was not acted on. It would have given their interactions some of the tension and excitement they lacked.

As for the magic system, I find Hemalurgy the most intriguing. It is interesting to think of it in terms of balance, because it is quite true. Inquisitors and Kandra are on opposite ends of the spectrum with Koloss in the middle, being neither inherently good nor inherently evil, just kind of primal. But I shouldn’t downplay the appeal of Allomancy, also based off of a balanced system, and I would love to see a mistborn in action. Some of my favorite scenes are when Vin comes flying into a battle and flocks ish up. The literary choreography of those moments is quite beautiful.

Speaking of the Kandra, what a nice surprise it was to discover their origins and relationship to the Terrismen. Learning about the Terris religion was one of the highlights of the trilogy for me, as I found the Terrismen mysterious and intriguing. It was definitely one of my favorite story lines, even though Sazed spent (almost) the entirety of the last book brooding.

Finally, the uprising in Urteau is (obviously) a thinly veiled allegory for how individuals and organisations distort the teachings of religion to serve a particular agenda. It was quite obvious and has of course been done before, but the Citizen, influenced by Ruin, essentially turned into the thing he was preaching against (the Lord Ruler’s reign). In conjunction, Sazed’s brooding on religious truth was so ceaseless that the philosophical purpose could not be ignored. Though the safe bet of ‘faith be the answer’ was sweet but not at all novel.

The Wax and Wayne trilogy may in fact be in my future. I’m not sure if I find it compelling or daunting that the final of the series is the best. While the last two of the original series weren’t as good as the first, I think I would have enjoyed them more if they didn’t have Elend dragging them down. As long as Wax and Wayne doesn’t have something like that, I may well enjoy it.

In Wax+Wayne, the fundamental relationship of individuals to magic has changed in the intervening centuries, so there are no more true Mistborn, only Mistings. That probably sounds like a major bummer, and it is in some ways, but Branderson (my nickname, copyright 2015) offers something in compensation: a dramatic increase in Feruchemical abilities has given rise to a number of intriguing combinations of Allomantic + Feruchemical twin powers. On balance, despite the interesting developments Branderson lays in store in the sequel trilogy, I still prefer the high fantasy Mistborn-style swashbuckling of Vin et al (but who are we kidding, mostly just Vin), but I was very impressed with Branderson’s interweaving of the mythology surrounding the original trilogy’s events and characters. This mythology has palpable effects on later centuries. Like N.K. Jemisin, Branderson also somehow manages to handle the near-omnipotence of a familiar character (Sazed/Harmony is roughly comparable to Jemisin’s Yeine) without letting the reader grow complacent--threats apparently exist that rival even Harmony’s awesome control. This is all by way of saying that the victory of Vin et al over Ruin, and even the Lord Ruler, may not have been as total as it seemed, and the villains of the original trilogy, menacing as they were, might not even be the worst baddies out there. Even Hemalurgy, long thought to be a lost/disavowed art, makes a surprising reappearance. To quote everyone’s favorite mystery solver: “Jinkies!”