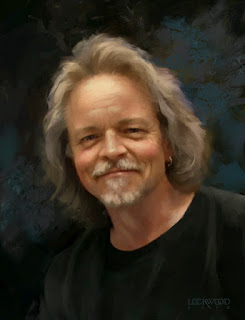 Todd Lockwood is best known as an artist. You will likely recognize his work from the covers of Steven Erikson's Malazan Book of the Fallen, Tobias Buckell's Crystal Rain, Marie Brennan's A Natural History of Dragons, and any number of other pieces of science fiction and fantasy art. What you may not have known is that Lockwood has published several short stories and his first novel, The Summer Dragon, comes out today.


It would be safer to ask what books I’d love to be reading. There is a stack of unread books next to my desk. Most of what I get to read is manuscripts I will be painting covers for—many of them I might read anyway, but I’m not going to count those. In my current to-be-read pile:

Unfettered II, from Grim Oak Press, edited by Shawn Speakman. The first volume of tales, Unfettered, was an anthology assembling some of the top writers in the industry, the proceeds from which went to pay off Shawn's staggering medical bills from a bout with cancer. Unfettered II will do the same thing for other authors who find themselves in dire monetary straits. It’s a truly noble and grateful thing Shawn is doing with this series. Plus, the stories are varied and fascinating, as the writers are unfettered from any theme.

Zen and the Art of Motorcycle Maintenance, by Robert M. Pirsig. It stunned me when I read it as a young man, and I’ve never really stopped thinking about it. I’d love to revisit that with a couple more decades of experience behind me.

Dune, by Frank Herbert. I read it three times, each time because friends insisted that I’d appreciate it this time. I liked it less each time I read it. I found it pretentious and populated with unlikable characters. I’ve since come to appreciate it for its visionary achievement, its insight as metaphor into our world, and the influence it’s had even on my own work, unbeknownst to me.


My favorite book of all time would have to be To Kill a Mockingbird, by Harper Lee. Perfection. But probably the author who had the most impact on my writing (no one book) would be Stephen King, because he writes people so well—subject matter entirely aside.

My latest novel, The Summer Dragon: First Book of The Evertide, is also my first. It’s my debut. It tells the tale of Maia, a young woman whose proud family raises dragons for the political war machine of the prevailing empire. It begins a trilogy that’s equal parts heroic fantasy, science fiction, philosophy, and politics, exploring themes of honesty and humanity, in an action-filled adventure. With dragons. Lots of dragons. It’s getting lots of advance praise, and I can’t wait for it to release on May 3rd.