A story of sisters and family and history and oppression. And death sports. 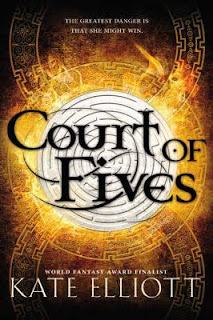 It might be easy to, at first glance, compare this book with other YA franchises because of its use of death sports and young people. Fives is a game where participants are part athletes, part combatants, and routinely die or are seriously injured on the court. It's a game that involves complex traps and requires a keen mind and strong body. And it sits at the heart of a plot that revolves around political intrigue, oppression, and privilege. So at first blush it might seem slightly familiar. And yet the character work and the setting set it apart, give it a more historically grounded feel where Fives is more reminiscent of chariot racing than anything more contemporary.

Jessamy, the main character, is kind of obsessed about the sport, about Fives. It is her release, her escape from the stifling world she inhabits, her father part of the colonizing elite and her mother one of the colonized lowborns. The novel is really about the valuing of women, about misogyny and the various faces it can wear, how a society can systemically oppress along binary gender lines and how colonization, racism, and vast economic inequality creates a tapestry of abuse and power and powerlessness. So in that it makes sense that so much about Jessamy's life is decided and steered by men more powerful than her. First her father, noble in as far as he can be without risking his career and standing. Then with a few members of the royal family, who take on two sides of the same coin, one cartoonishly evil and the other trying to be undeniably good (but sort of being an ass about it much of the time). I think the novel does a good job of making these characters complex and compelling while not forgiving them their ignorance and not erasing the harm they do.

More interesting, though, is the extended cast of female characters, mostly Jessamy's family but extending out to all levels of the society Jes must navigate. The cast is large, but I never really had a difficult time differentiating between them. Everyone has a unique voice and perspective, each character driven in their own ways and after their own goals. Jes simply represents the one whose talents and drives code as most "masculine." She's something of the classic tomboy, not really interested in much besides Fives and with enough talent that it further highlights the inequity of the system—were she a man she would be respected, advanced, and cheered for her decisions instead of being under constant threat of violence and erasure. It definitely gives the story a strong tension that never lets up. It's definitely not so intense as the Crown of Stars series, but as this is a YA book that signature uncomfortable feeling is still present, and the characters are forced to go through an awful lot of…well, awful stuff by the time the book ends.

Which in many ways makes this book more uncomfortable than reading about a male character having to deal with the harrowing terrors of battle. The way that the feeling of powerlessness and loss and fear is portrayed is expertly done. Jes must constantly deal with the fact that she has no real rights. That at any moment she could be assaulted. But Jes is also surrounded by strong women, women who know the system and stand up to it in their own ways. As a YA novel, the book succeeds too in showing the power of young people, and especially in young women, to shape the world around them. This book has something of a generational tension, where the society is run by old men and the young must find a way to assert themselves and fight while becoming aware of their own privilege and trying to find a better way forward. In that it's a hopeful tale but only the first part of a larger series. Characters are introduced and the plot slowly revealed, but only ever partly. Jes' fixation on the game puts a large emphasis there, where what's happening politically is still vague and mostly undefined because of Jes' lack of interest in it for most of the book, and the fact that, as a child, such things are kept from her.

In the end, Court of Fives is a rather fun book about intersectional feminism (and blood sports) wrapped in high fantasy and presented with a fresh voice and engaging cast. The plot is a little vague this early on and unfortunately things remain purely reactionary and grounded to Jessamy and her family. There's a strong promise, though, that things are going to grow out from here, and perhaps in some strange (and rather dark) directions. There's a light romantic element as well that I thought was handled pretty well, though with a near-constant stream of poor communication which made it a bit painful at times. Entertaining, but painful. As far as high fantasy YA novels go, this one lays a lot of groundwork for future exploration while maintaining a quick pace and juggling a large cast. And despite being rather hefty, it's a swift, enjoyable read.

Bonuses: +1 for an interesting and varied cast

Negatives: -1 for a bit cartoonishly evil a villain

Nerd Coefficient: 7/10 "an enjoyable experience, but not without its flaws" see our full rating system here.