Like most teenagers, I would rip pictures out of magazines and tape them to the inside of my high school locker. Through the vagaries of youth, those pictures would frequently change. With one exception: I would always have a picture of Tori Amos placed prominently.  Usually this one:

Her music had an atmosphere which permeated those years and into college. Her songs were a major part of the soundtrack of my youth. In a very real sense, Tori's music is the music of outcasts and the ill-fitting. I suspect there is a much longer research paper that could be written about that idea. It may not even be entirely true, either, but it feels true. It feels right because even when it isn't, Tori's music is about acceptance.


Professional Wrestler Mick Foley wrote about the impact of Tori's music on his wrestling career in an article on Slate back in 2010 and had this to say about the song "Winter" and the refrain "When you gonna make up your mind? When you gonna love you as much as I do?"

Most listeners would interpret "Winter" as a song about a father's love for a child. But the question in the refrain always appealed to the scared part of me, the part that believed I wasn't strong enough, or big enough, or good enough. It never made me think of doing wild and dangerous deeds inside a wrestling ring. It helped me believe that I was strong enough to do the things I already knew needed to be done.


In Mick's mind, "Winter" became a song of self-acceptance, as it likely is for just as many people who hear the song about a father and his child. I think it can be both.

I'm avoiding the elephant in the room.

When we think about Tori Amos and "Nerd Music", the first thing that will likely pop into the head of any avowed nerd is Neil Gaiman. Tori has been dropping Neil references as far back as 1991's Little Earthquakes album with her song "Tear In Your Hand:

"If you need me, me and Neil'll be hanging out with the Dream King. Neil says 'hi', by the way."

When I first heard "Tear In Your Hand" I had no idea who Neil or The Dream King were. Nor did I when I heard "Space Dog" on Tori's 1994 album Under the Pink. In that song Tori sings, "seems I keep getting this story twisted - where's Neil when you need him?" Again with a Neil reference and again I had no idea, though I picked up on it as an odd line connecting her albums. 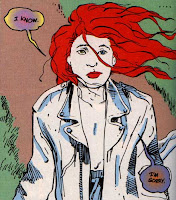 Any reader of Nerds of a Feather has almost certainly heard of Neil Gaiman, whether as a novelist (Neverwhere, American Gods, The Ocean at the End of the Lane), a children's book author, or as the author of the famed comic book series Sandman. Neil likewise quotes some of Tori's lyrics from "Tear In Your Hand" in his Sandman book Brief Lives. Tori's fansite HereInMyHead notes that this is the book in which the character of Delirium most resembles Tori, though it is important to note that Delirium was created before Neil had met Tori and became friends.

Admittedly, I'm not much of a fan of Sandman, which probably makes me a geek heretic of some sort. But that's okay, because like we talked about early - this is about nerd acceptance, right?

Of course, Tori's fans are nerds themselves - like, did you know that before she was TORI AMOS, Tori fronted an 80's synthpop band called Y Kant Tori Read, which featured Matt Sorum on drums? Sorum would later drum for Guns and Roses on both Use Your Illusion albums as well as with Velvet Revolver? Pretty awesome, huh? 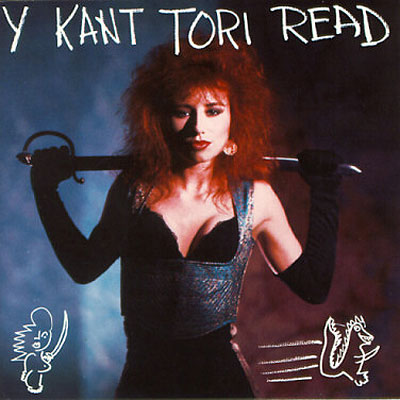 In other news, Tori Amos wrote the music and lyrics to the 2013 musical The Light Princess, based on a George McDonald fairytale.