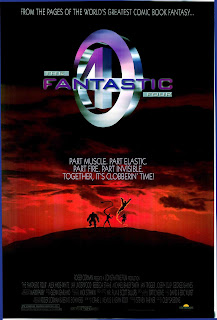 Sometimes when somebody buys the movie rights to a piece of intellectual property, there's a clause in there that states that the rights will lapse if the buyer doesn't actually make the thing in a given period of time. There have been a few examples recently, and the results are usually unwatchable. There's the Atlas Shrugged trilogy, which started filming two days before the rights were going to lapse, and there's the bizarre pilot to a Wheel of Time TV series that aired on FXX in the dead of night. Long before those, however, was The Fantastic Four. Variety did a good recap of the story behind the 1994 film produced by Roger Corman, and there's a documentary coming out in the next few months that goes into more depth. But the tl;dr version is that the 1994 film was made solely so Constantin Films could retain the rights to the Marvel property, and the film was never intended to be shown. Avi Arad from Marvel even reportedly bought up every copy and had the negatives destroyed to keep it from being seen.

But while that may have worked with the original film elements of The Magnificent Ambersons, that genie doesn't go back into the bottle in the age of computers and the internet. 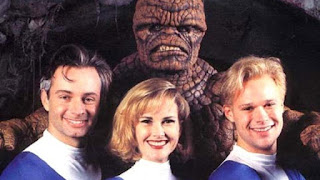 I am on record as saying unreservedly that I love Roger Corman and believe he has been a singular force for good in American cinema. So if you come at this film wondering what a Roger Corman adaptation of a Marvel comic book property would look like, then it's pretty much exactly what you'd expect. There clearly wasn't a lot of money, so The Thing is a dude in a suit, whose mouth seems to have one pattern of movement, which it goes through every time he's talking. Reed Richards' ability to extend his arms and legs looks terrible. Sets rely more on smoke machines and lighting than on being actual sets, and your prosthetics and makeup are probably on par with an entry in the Leprechaun movie franchise. 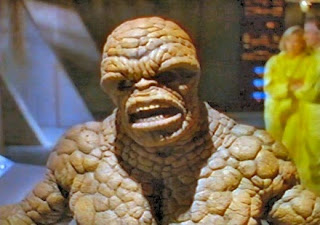 But there's so much more here than just paltry production values. Some of it is acting — Jay Underwood as Johnny Storm is particularly egregious, Henry from Punky Brewster plays an astronomy professor at the beginning of the film like he's the top dog at the Al Pacino School for Scenery Chewing™, and Kat Green as Alicia Masters is put in a few spots that Vivien Leigh wouldn't have been able to make even vaguely human. Some of it is the use of early CGI to render the Human Torch, which looks spectacularly bad, and almost caused me to do a real-life spit-take. But mainly what really undermines this movie more than anything are the spectacular collapses in logic and motivation. Here are a couple of my favorites:
Also, it should be said that the final shot in the movie is one for the Terrible Movie Hall of Fame™.

In the final reckoning, though, this one's hard to get my head around. It's not awful enough to be a truly to-shelf terrible movie, but it's certainly not good. The fact that everyone is obviously trying to hard to make a good movie actually makes the whole thing a little sad. On the whole, it's probably more worth seeking out because of the lore surrounding it than the actual content of the film.

Bonuses: +1 for Rebecca Staab as Sue Storm, who looks more like a drawing of a comic book character than anyone I've ever seen in another comic book adaptation; +1 for 3-5 legitimate (although unintentional) laugh-out-loud moments; +1 for its place as one of the cult film Holy Grails

Penalties: -1 for crumbling under the weight of basic logic and human emotion; -1 for the Jeweler. Seriously, Dr. Doom isn't enough for your origin story? You need a weird troll running around kidnapping blind girls, too? Why is he in this movie?

Cult Film Coefficient: 4/10. It's worth watching if you can track it down, but don't put yourself out.

Posted by Vance K — cult film reviewer and nerds of a feather, flock together co-editor since 2012.
Posted by vkotrla at 12:00:00 AM