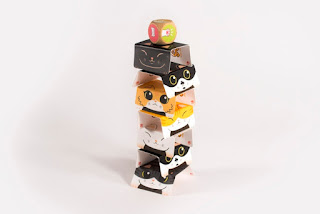 While not related to comics, I am happy to announce that Cat Tower, one of the games I dubbed a sleeper hit at Gen Con, has found its way to Kickstarter!  As a proud backer of this title, I hope you check it out and see if you need a game in which you stack cats in your life.  You probably do.

This past weekend I was able to attend some of the Great Fables Wake at Austin Books.  I wish I had the opportunity to attend more, but what I saw was a first class operation and it was great to see the fans and creators come together to say goodbye to such an influential title.  Fables was key in my return to the comic book medium and I am planning a massive reread in the near future. 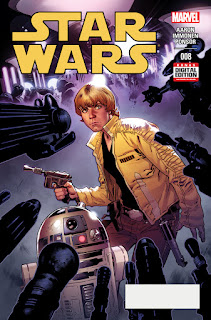 Pick of the Week:
Star Wars #8 - While we still don't know if Han Solo is actually married, we do know that the woman who is claiming to be his wife is tough enough to hold her own with Mr. Solo.  I love seeing the back and forth between the two of them and understanding why Princess Leia truly dislikes and distrusts Han early in the story.  Han clearly has a lot he needs redemption for and the ability of the comics to provide this context is very powerful.  On top of that, Imperial forces have been alerted to Leia's presence and are bearing down.  If that wasn't enough packed into this book, Luke foolishly breaks out his light saber in a seedy bar and draws some unwanted attention.  This series remains a must read for any Star Wars fan.  Really good stuff.

The Rest:
Birthright #10 - Another brilliant issue from Joshua Williamson, Andrei Bressan, and Adriano Lucas.  We get some more peeks at Mikey's downfall in the land of Terrenos and some hints as to how the Nevermind possessed him.  While it was fascinating and left me wanting more, the big moment in this issue was a showdown between Mikey and his past.  In an attempt to free him of the toxin that is infecting his blood, Mikey is forced to confront his past and witness what he has given up in his quest for power.  This is followed with a shocking ending that is going to make the wait for issue #11 quite difficult.

Rai #9 - I will admit I haven't read this series in some time, but a new arc seemed like a good time to  revisit a book that I enjoyed.  A lot has gone down since I left the series and thinks don't look good for Rai or any of the rebel factions.  Rai is needed more than ever given the current state of things, but he has been left for dead on Earth.   The rebellion is hanging on by a thread and the hope is Rai is alive and able to return to New Japan.