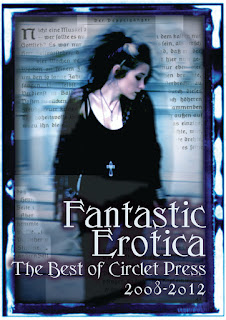 I swear there will be a minimum of penis jokes in this review (starting now I guess), because in all seriousness I think erotica gets a disproportionate amount of derision and disdain from readers in general. It gets put off in its own section, and anyone caught wandering that aisle must deal with an awful lot of strange looks from bookstore patrons and staff. When, really, what this collection is is an amazing collection of speculative stories from a wide range of genres and experiences brought together to entertain, to challenge, and yes, to arouse. The level of the fiction is as good as I've seen in any speculative anthology, and the stories are at turns tragic, inspiring, and incredibly sexy.

Perhaps it's to be expected, because this is a Best Of... anthology, pulling stories in from across multiple years, but that hardly changes the fact that the fiction is amazing. Without a central theme, the collection shows the stories voted the best by readers, writers, and editors, and is presented in such a way to provide a sort of sampler pack of what erotica is and can be, a way of introducing the wary and the gun-shy to a world of adventure, action, and sex. Like all speculative fiction, each story invites the reader to enter into a new world, some like our own and some very much not. And the different styles and settings show that sex is (despite how it's taught in much of the US) very much a part of life, is lifting and powerful and impossible to ignore.

The stories themselves range far and wide. Sacchi Green's "The Pirate from the Sky" stars an all-female bad of pirates in a steampunk Southeast Asia trying to live free, and also perhaps to stop a global war. Meanwhile, in Sunny Moraine's "Catch and Release," a space-faring junk collector finds something floating in the inky dark that turns out to be much more than he bargained for. When Suleiman opens a metal pod to find a woman inside, a woman unlike anything he's even encountered, he finds himself the inheritor to a punishment he doesn't understand and refuses to enforce. On the surface, the stories could not be more different, alt-historical fantasy to deep space science fiction, and yet in each the stories shine as unashamedly speculative and complex, nuanced. Themes of freedom, of rebellion, of loneliness and isolation all intertwine and provide backdrop to hard choices with outcomes that are not always blindingly positive. These are not stories that can be separated from the sex they contain, though. Indeed, sex is central to both stories, the ideas of body autonomy,  of choice, of freedom all tied to the way sex is portrayed and experienced by the characters.

This is not to say that the anthology is without flaws. As said, there is a certain lack of overall structure to the collection, and transitions from story to story can be a little jarring for those not ready to move from historical fantasy to dystopic future to second world fantasy to post-apocalyptic sprawl. The anthology certainly doesn't stay in one place long, which was part of why I liked it but those seeking a more interconnected feeling in terms of genre and theme would probably be better served seeking out a themed anthology instead of this collection, which was voted on and selected to try and provide a sampling of the best of the best erotica. Unfortunately, being a sampling of all sorts of different kinds of stories also means that some are bound to fall a little flat. And while I personally found something to like in every story in the collection, I will admit that there were a few I cared for a little less.

With stories like N.K. Jemisin's "The Dancer's War," though, it is impossible to be anything but incredibly pleased with the collection as a whole. Building a rich second world with a layered and interesting political system, the story shows just how much fun erotica can be, two men locked in a duel, neither willing to admit defeat even as the stakes rise higher and higher. It is an incredibly cute story, but also one that shows a subtle talent for world-building and creating compelling characters. Bernie Mojzes' "Ink," meanwhile, shows just how far erotica can be pushed to the limits. There are all sorts of jokes that could be used when hearing Lovecraftian erotica (I mean, tentacles, come on), and yet the story manages to craft sex and character and loss and longing in a way that is not ridiculous, that does not build to a punch line. Instead, it manages to capture that fear of the unknown, the draw and repulsion, while being sexy. Which I was not expecting at all.

In the end, Fantastic Erotica provides a stunning map to the vast realms of erotica, featuring a nice variety of characters, sexualities, genres, and themes. And they show the power and uniqueness of erotica. These are not science fiction or fantasy stories with sex scenes added in to sell. The sex is integral both to the plot and message of these stories, and is depicted with skill and passion. These are speculative stories, no less deserving of time or consideration than anything that appears in Asimov's or Lightspeed (and indeed many of the names here have appeared in the most prestigious of genre publications). That they feature sex is deliberate, and should not somehow transform them into stories that "true SFF fans" would not read. Sex is just another part of life (a very sexy part) and to treat it as different, as outside "normal" fiction, is to do both SFF and readers as a whole a vast disservice.

Bonuses: +1 for an amazing variety of stories, sexualities, and genres, +1 making an Eldritch Horror sexy

Negatives: -1 for a lack of clear organization

Nerd Coefficient: 9/10 "probably go out and read this now"