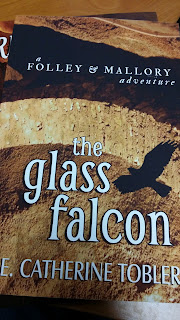 The Meat: I love adventures. Mary Shelley, Robert Lewis Stevenson, Mark Twain, so many others- I love stories that simply carry you away. So it is probably little surprise that I am quite fond of this story, but there are far more reasons than the fact that it is simply an adventure story, through and through.

Tobler has what I would term a gift for words. The Glass Falcon is a novella- fairly short, a mere 89 pages. But her vocabulary, and use of ornate, precise and detailed language makes it seem much longer, or rather, deeper. In a world of epic fantasies that drag on forever (lookin' at you, George R.R.), I really appreciate a story - author - who knows what details to include, which ones to omit, and how to express them in a rich way.

I also enjoy the way very diverse elements blend together - on one hand, it is a steampunk adventure, a sort of love letter to Paris that doesn't precisely exist - But also deals with shapeshifters, Egyptian gods and ancient history, and the mystery which lies at the heart of this story. It's a lot to pack into 89 pages, and it is done without moving too swiftly or getting bogged down in clunky exposition.

Potential spoiler alert here, but I have to comment on it, because it was masterfully handled, and central to the story and its ending: the perspective of the gods. Every bloody YA/NA (which this is not), paranormal, etc book out there right now has gods and immortals by the bucketload, and they are all perfectly relatable to humans. This is catastrophically stupid. These infinite beings fall in love with normal humans, schoolgirls, etc, with no problem at all. Instead, Tobler gives us a treat with how it really would be- these beings of extreme power and wisdom don't actually relate to our world very well at all. Not in how they talk, not in how they act, or even how they think.

My only complaint has to do with the characters. While this story stands alone, reading its predecessor (Rings of Anubis) is helpful. I like Folley quite a lot- she is a well-developed, strong character, but I didn't feel she progressed much though the story. She enters the story, reeling one might say, from the events and revelations of Rings, rightly so, but for a character of her strength and depth, by the end of Falcon, I really think she would/could/should be much more in control of things - in fact, there is one scene where she is quite in control (not like that, you perverts). More of that, please. Likewise, Mallory acts more as a sounding board than he did in the Rings, where we saw him much more strong-willed and determined.

Bonuses:
+1 for being a well-balanced, complex story that is not over-long
+1 for the spoiler alert thing above

Penalties:
-1 for having the human characters remain stagnant

Grab it here, and pick up Rings of Anubis while you're at it.