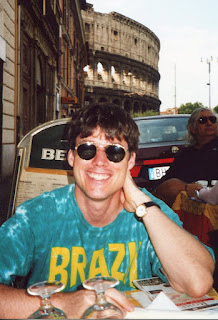 Tom Doyle is a writer of fantasy fiction, as well as nonfiction. His latest, The Left Hand Way, is a sequel to the highly regarded military fantasy novel American Craftsmen. Today he shares his "6 Books" with us...

The Hunchback of Notre Dame

by Victor Hugo. I’m reading this because I’ll be touring France soon, but I got far more than I bargained for. The compressed “beauty and the beast” story that dominates the retellings in other media captures very little of Hugo’s panoramic view of late medieval Paris. Also, I’ve been surprised how much more engaging it is than Dumas’s The Three Musketeers.


2. What upcoming book you are really excited about?

by Michael Swanwick. Technically this isn’t upcoming, because it just came out, but it’s still upcoming for me, because I’ve been too busy to devour it immediately, as I would very much like to do. The Post-Utopian conmen Darger and Surplus are two of my favorite characters in SF/F. I’ve heard Swanwick’s reading of the opening, so I know it’s going to be a good one.


3. Is there a book you're currently itching to re-read?

The Complete Works of Shakespeare

by William Shakespeare. I’m not generally a re-reader, particularly as I listen to many audiobooks, so it’s difficult just to skim some favorite portion again. But I think I’d like the leisure to re-read (or in a few instances, read for the first time) all of Shakespeare. When I was in The Taming of the Shrew in high school, memorizing my lines gave me such a good sense of rhythm that I was able to crank out a dozen sonnets in a sitting, and I’d like to regain some of that sense.

by Roger Zelazny. I love this book, but on rereading years later, I realized that many of the characters who are nominally mature adults are in fact teenagers in their behavior, and therefore designed to appeal to younger readers. I felt a little robbed--these characters who had seemed so cool could no longer be models for me. But the book’s mash-up of religion and science fiction still blows me away.

by Jacqueline Carey. Okay, this is cheating--I was a full adult when I first read it. But I read it right before I started writing seriously (so in that sense, I was a young writer), and its mix of alt history, intrigue, magic, and sex was a revelation of the possibilities in the genre.

by Tom Doyle. The magician-soldiers and psychic spies from American Craftsmen are back! Witness as they battle an undying evil out of Poe in a globe-spanning thriller! Discover the secret interracial history of British literature! You won’t want to miss it! (Did I use enough exclamation points?)
Posted by The G at 12:00:00 AM