A relatively low key week in comics this week.  As I type away I am distracted by the Great Fables Wake which I will be attending next week.  In an attempt to recreate the love of Fablescon, the good folks at Austin Books and Comics will host a wake for the beloved series Fables.  For more info check out the Tumblr here. 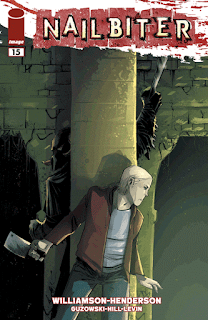 Nailbiter #15 - I really don't want to wait until October for the next issue.  Things got real as the crew ventured further in the caves under the graveyard.  Joshua Williamson has mastered the art of keeping the reader hooked by revealing just enough information to create more questions.  There is some sort of master plan and I fear for the people of Buckaroo, Oregon.  The feds have officially set up camp in town and the reveal at the end is going to make the next two months difficult.  At least it is plenty of time to read this series again.

The Rest:
Darth Vader #8 - Things are not going well for Lord Vader.  After failing to capture Luke on Tatooine, things appear to be getting better when his assistant pulls off an impossible heist from an Imperial Cruiser.  Vader is quickly put in his place by the Emperor as he is still being held responsible for the Death Star.  It is very interesting to read about a time when Vader was the low man on the totem pole.  Good stuff.

Mad Max Fury Road: Max Part Two - We finally learn who the two characters Max flashes back on during Fury Road.  In a somewhat disappointing issue, Max ventures down into a den of Buzzards to rescue his ride and a little girl.  While the pedal was pressed to the floor the entire time, I was really hoping to gain more insights into the characters.  The film was brilliant, and these comics had the unique opportunity to really provide the context that was lacking.  In the end it was entertaining, but shallow.