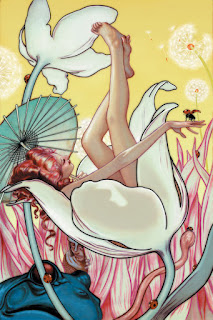 With my disinterest in both the Mavel and DC events, but pull list is shrinking each week.  Despite this, some good titles dropped this week and my attention is turned towards the Great Fables Wake.  Happening this upcoming weekend in Austin, fans of the beloved Fables will be treated to panels, original art, contests, and a pool party.  I am looking forward to returning to Fabletown one last time and celebrating the book the brought me back to comics many years ago. 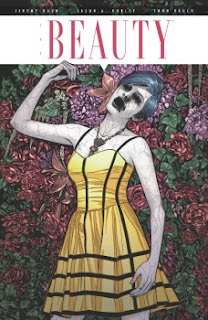 Pick of the Week:
The Beauty #1 - This debut from Image sure looks like a sure fire hit.  Creators Jeremy Haun and Jason Hurley describe it as "the little book about an STD that makes you beautiful."  The Beauty tells a story that includes The Beauty, people who are very attractive that are carrying the disease, and the rest who are not as attractive but are disease free.  This divide has created anti-beauty activists and a wave of crimes related to the disease.  Very interesting premise and a great first issue that will leave you wanting more.  The first issue centers around a girl who has the disease who has apparently spontaneously combusted.  There is more going on with the STD then people realize and it will be interesting to see how things develop.  I smell a future TV deal with this one.  This is a great time to hop on this bandwagon.

The Rest:
Batman #43 - We are one step closer to the return of Bruce Wayne as Batman, but Jim Gordon has one last massive task to complete.  He needs to stop Mr. Bloom.  Mr. Bloom is an intriguing villain who has been selling super powers via seeds he creates.  This type of power is sure to catch the attention of other villains, and it is clear that not everyone is happy with what he is providing to Gotham's criminals.  I feel that we are very close to Bruce putting on the cowl again, but Gordon has been a worthy replacement.  He just needs to survive one last battle.

The Walking Dead #145 - Things have been relatively calm on for Rick and company, but that has all changed after the recent events with the Whisperers.  An emotional issue is setting the stage for the next big arc that will likely end with a lot of beloved characters dead.  For some reason I fear Carl will either be killed or kill someone we care about.  He is too involved with the Whisperers and it isn't going to end well.

The Unbeatable Squirrel Girl #8 - After months of my friend telling me I should be reading this book, I finally decided to listen and am pleased that I did.  I caught the end of an arc that was filled with mind control, Cat Thor, humor, and action.  Ratatoskrage, a rat god who was involved with Wikipedia in some way, was wreaking havoc on New York City.  Squirrel Girl, with the help of some Asgardian friends, banishes the foe and sets the foundation for a new arc that I am exited to start from the beginning.  The Unbeatable Squirrel Girl was truly a joy to read and I have plans on picking up the back issues and adding this to my pull list.