The action accelerates but the emotional logic falls behind


Television reviewing is an easy task in many ways. A short, intense burst of culture means for the busier blogger they can access something of note far more efficiently than through gaming, novel-reading or,er, calligraphy. There needs to be more calligraphy review on here by the way.  Anyway, it can also be a difficult task. Instant responses from the critical mass of press and online writers and comment boards means the personal and often solo experience of novel-reading is - unless you can filter out the noise that comes down your fiberoptic cable - mutated by others' opinions. Additionally, the practice of reviewing a series after one or two episodes in is of course like giving a book review after 75 pages, or stepping out into the lobby after 25 minutes of a film. It's a staple of how the form is assessed, followed by several episode-by-episode reviews, and a finale round-up that looks back at the series as a whole, finally tying-in with the way all other forms of story-telling are judged.

So at what point does one step into the fray? Is it justifiable to place judgement on a story only half-told? Or should we only judge the telling, and not the tale? On this translucent stage, I return to the British version of the Swedish hit Real Humans, because I'm inspired by how the telling as affected my experience of the tale, and how it reveals the pitfalls of an admirable attempt to merge sci-fi philosophy with the trapping of a modern-day tv thriller.

One element that has blossomed and developed since I wrote my first review  is that a level of both fun and sadness has emerged in the plotting to give emotional complexity to a show that was feeling little too one-note in its dour and quiet depiction of its characters' paths. This is perhaps best displayed by two of the synth characters - Niska (Emily Berrington) and Max (Ivanno Jeremiah) - and how they contrast. Without too much spoiling for those further back than episode 7, it is clear that the central synth characters are linked in some way, yet despite a common background Max and Niska's take on the world is wildly different. Just like real humanity, their A.I. is influenced by experience and so the trusting innocence and loyalty that Max retains is replaced in Niska through horrible treatment by embittered, aggressive distrust and another form of wisdom. The way these two negotiate their journeys, and their philosophical stances, has been for me the highlight of the series, and emblematic of its ambition to tackle the big questions of A.I. - what is true humanity, what is instinct and what is programming, who is superior and can co-existence occur after the singularity ? It doesn't hurt that like most of the cast these two shine in every moment they are in and bring pathos and humour to the often monochromatic emotional moments they find themselves in. 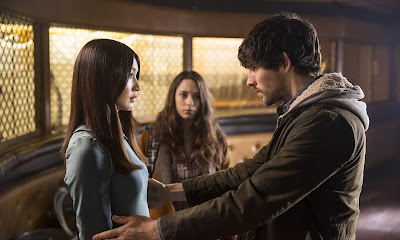 Sticking with performance over plotting for now, William Hurt, though in a supporting role for the most part, also is allowed to delve deeply into these issues and areas of light and shade. His 'humanity' shines out of his eyes with each wry smile and heartbroken shrug, and whilst that is perhaps mere testimony to a gifted actor, it is also a signal of the intelligent decisions in direction and writing to let someone of such gravitas and nimbleness perform some of the key moments of debate and moral confusion.

However, the perfomances and dialogue in the core story of synth Anita/Mia and the Hawkins family to me clearly demonstrate in every episode the key flaws in both the tale and telling. Whilst Gemma Chan as Anita continues to impress with an adept display of both unnerving robotic creepiness and heart-tugging humanity, often in the same moment, and the family themselves often rise to meet this excellence (particularly the older daughter Mattie and at times Katherine Parkinson as the mother), too often I found myself frustrated by the seeming need to ground the narrative in cliched 'everyday suburban family' behaviour - the exasperated, judgemental yet wounded mum/wife, the taciturn yet naive and selfish husband/dad, the rebellious intelligent teenage girl, the wanking son... I have no problem with wanting to draw in an audience that otherwise would not watch a sic-fi show with relatable conventions, and some moments ring true, but too much of the drama hinges on how these people react to circumstance and in almost all episodes their reactions are predictable and dull. (Spoiler alert- can skip to next paragraph) Parkinson's Laura is distrustful of Anita and envious of their bond with the children, but comes to care for her and defend her, just as the repressed, falsely-affable dad (a disappointingly one-note act from Tom Goodman-Hill) goes from 'hey, it's cool, the synth is great' to 'hmm, I want to shag the synth' to 'I am ashamed and want to synth out of here'. The way the moment of sexual perversion (is it rape, as the teenagers at the party earlier attempt?) by him his used as a plot pivot is dull and unconvincing, and far too weighted as a device to push things forward. This culminates in his bland treachery of calling the police on Leo and Max, despite nothing needing him to do that.

The children fare better, perhaps because their coming-of-age stage of maturity ties in well both with society's learning to deal with the synths, and with the advanced synths' coming-of-age. The elder daughter is rather neatly a coding wizard so becomes the link to Leo and Max, and this is a much better contrivance, as is the link between the agent hunting them and their inventor. Also worth mentioning at this stage is the improvement in the initially amateurish strand involving Neil Maskell's police officer and his intruiging partner played with increasing impressiveness by Ruth Bradley. His distrust of synths is at first used as a blunt metaphor for racism, not helped by his 'London geezer' accent and 'I don't play by the rules' tv cop cliched behaviour. (spoilers again, sorry) Yet it becomes touching when his marriage dissolves in the face of his wife's falling for her synth, and his numb shock at his partner's true nature shows how far synth-human relations have to go, and works as a great metaphor for sexuality, gender indentity and coming out.

So we have one episode to go, which no doubt (given the events at the end of episode 7) will resort to action and contrived moments of accidents determining fates, but the word is that like its maternal Swede, the series will be renewed for a second run, so plenty of threads will be left hanging and avoid too-neat a conclusion. For as the waters have muddied and the layers have developed, this sci-fi drama has, like the synths, evolved into something far more interesting and complex than it could have been. All I ask is that as a second run allows a little more breathing space, we are given less logic-defying jumps in plot and more surprising and individual behaviour from the human characters. Because what is a story about robots becoming unpredictable, unique almost-humans, if the humans themselves are rendered at times as somewhat less than that?

Bonuses: +1 for the synth characters of Anita, Max, Niska and Odi - moving, amusing and scary; +1 for the largely superb performances; +1 for the now-unpredictable outcome of the story

Negatives: -1 for the sometimes cereal-commerical cliches of the Hawkins family and the boring husband; -2 for logic-failings and forced moments of plot-shifting action (I'm looking at you, bridge leap) that remove you from the sense of realism

Nerd Coefficient: 7/10 "an enjoyable experience, but not without its flaws"
(check out our scoring system to see why a 7/10 makes this a worthy watch)

POSTED BY: English Scribbler, who, if they were a synth, would be called Cassius and work as a techno dancer in Ghent. NOAFFT contributor since 2013