The singularity draws near in a new sci-fi tale, adapted from the Swedish original. A familiar near-future of robotic servants is explored with all the moral and ethical conundrums involved, whilst making sure it all looks nice and pretty like a car advert. 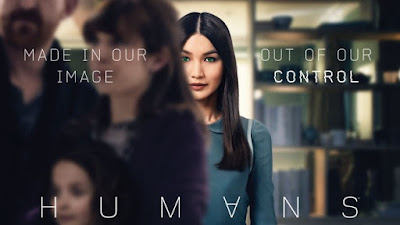 My childhood and indeed most of my adulthood has been forever scarred by the trauma of having to wait for American films and TV to come out over here in Britain. I remember the long months before E.T. decided to grace us with his presence and then not even make it clear what gender s/he was. Confusing little flirt. Then it was three months before Steel Magnolias came out here. Trauma. Nevermind Kickboxer 3 and Mystic Pizza. I moved to America in 1994 mainly so I didn't have to wait for ER and to find out who this Letterman guy was. And don't even start me on The Walking Dead - we give you essentially 90% of the cast and then we have to pay for it online? ONLINE??! Have you people ever been online? It's horrible. Just horrible. Full of ranting geeks with a keyboard and too much time going on about their childhoods in a vain attempt for attent... Anyway, the important thing is television drama's recent renaissance in the U.S. is slowly spilling over here, as British broadcasters see the merits of selling a series globally and onwards to streaming services. So to  Humans, a coproduction from Channel 4 in the UK and AMC over yonder, which is something of a composite of all that is right and much that is wrong with the current state of play with this situation. Regardless for a show with the production values only an American co-pro could afford (see also Strange and Norrell) to come out at the same time both sides of the pond is a real joy.

Real joy isn't much of a factor in the largely downbeat two episodes so far, however, apart from some comic touches. I don't mean it is joyless to watch, just that the atmosphere is solemn, anxious and cold. Being an adaptation of the Swedish series Real Humans, perhaps that is no surprise, although that acclaimed programme was never shown here, so I am leaning on a prejudice born of being an enormous Scandi-Noir fan, and regardless of origin the story itself merits a sober and concerned landscape. The story commences with a brief and effective display of a near-future where lifelike robot servants, 'Synths', are the domestic norm, at least in wealthy suburban London, U.K. As debates continue on the news and amongst the public over the ethics and implications of such technology (a false note - I would argue that surely earlier, less incredibly-realistic androids would have been on the market for a decade or so, and improved over time, and such questioning would have died down in the meantime), one family, struggling with the old work-life balance, gets a model whilst Mum is away. Her negative reaction then forms the heart of the drama. My negative reaction began with the idea that you could just walk into a shop on a whim, and walk out with tech that must cost a small fortune, with little awareness of how to use one and zero choice on what sort you have. Sure you could walk into a Porsche dealer and drive off with something expensive, but you tend to know how to drive first and have at least decided on a colour. 'Oh, nice, an attractive woman who is cast to be aesthetically unlike my wife in a very obvious dull way and fulfils some sort of plot device that alien tech should be sort of Asian-y to emphasis the notion of otherness', smiles Dad. Wouldn't we all know we want, say, a white iPhone with 32gb on a certain network and not just stand there and go 'ooh nice, ok thanks' over something so controversial and complex and costly and other things beginning with 'c'? Small failures of realism like this meant the series so far has failed to lift itself beyond a Black Mirror-esque issue-driven exercise in allegory.


Two other plots intertwine with this family's journey. One follows a desperate, hunted group of synths led by a human (?) who seems to have serious dubbing/sync issues with his voice, on the run and searching for the same synth now doing the dishes for the above family. The other showcases a gentle and warm performance by William Hurt who was probably flown in to bump up the draw for U.S. audiences for a nice fee and some time on the London stage but earns his presence magnificently. His character (spoiler !) is soon revealed to be one of the original synth inventors and touchingly is attached to his outmoded model who can remember his family history when Hurt cannot. No further spoilers because despite my gripes this is an absorbing and fun watch.

Now of course this universe coincides very neatly with our ongoing season on Cyberpunk and hits many notes struck in the past. I'll return to it when it is over and look into how it compares with other latter dives into the sub-genre, and whether it contributes anything more than 'oh wow they are so like us, where is the boundary, what is a soul, what's it all about maaaan'. Thus far, it succeeds as a superior, slowly-paced yet fairly tense modern drama. The characters are all relatively well-portrayed by a good cast, given the necessity of some brief scenes of expository dialogue ("Do you know what the Singularity is?" ; "I don't trust them, I don't want it touching the children") they have to bash through. Some of the synths in particular are clearly a treat for the actors to play and do so brilliantly. The music is a little obvious, ranging from cautionary strings to , oh, genius, 80s synths (on loan perhaps from AMC's Halt and Catch Fire's superb score), the sound is excellent if occasionally over-dubbed and it is as I say, shot beautifully, but like a car advert, and some more down-to-earth imagery might have better played the 'this could happen tomorrow' feel. Time will tell if the robots rise or humanity crushes their emerging emotional intelligence, and if the plot rises to meet the great premise and cast, or crushes my hopes like the foot of a T-800.

Scores to follow at series end; for now, a provisional 6/10

written by English Scribbler, who has been undercover as a normal human in the London suburbs for years but still can't listen to David Guetta without short-circuiting