Micoreview [book]: Tough Times All Over by Joe Abercrombie (Rogues #1) 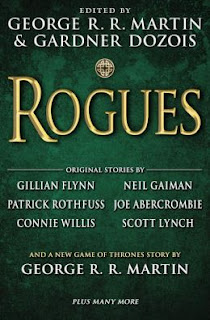 I recently presented my overly ambitious summer reading list, and when I put this list together I didn’t take into consideration that, well, it's summer. Here in the northeastern USA, it seems to be cold more often than its warm, so during summer I am outside as much as possible. My free time is spent riding the trail, playing in the garden, and watching baseball. Sounds great right? But there is one thing missing….reading. I’m not even one to read on the beach, which is an incredibly popular pastime 'down the shore'. I’d rather just sit in the sand and smile at (or go swim in) the ocean. My most heavy reading is done in the fall and winter, where the bike rides are short and bundled and the play outside time is spent shoveling snow.

So perhaps my summer reading list should have been comprised of short stories. But, I’m not really a short story person either. I don't know why, but I just never really got into reading them. However, I do have a bad habit of buying short story compilations simply because they contain ASOIAF canonical works. I read those GRRM pieces and tuck the anthology away on my bookshelf, never to be opened again (Legends I, Legends II, Warriors, Dangerous Women, Rogues). And I’m sure I’m not the only one who does this. Thing is though, most of these compilations are chock full of fabulous writers, many of whom (in Dangerous Women and Rogues in particular) are household names to fantasy readers: Abercrombie, Lansdale, Butcher, Sanderson, Grossman, Sykes, Rothfuss, Gaiman, etc. It's a shame to let these all go unread. In fact, the only short stories or novellas I have ever read (of my own accord) that weren't part of the ASOIAF cannon, were part of the Kingkiller one. I fear I am a lengthist, practicing short story elitism. Frankly, I am ashamed of myself.

So, disgusted with my practicing length discrimination and vowing to change, I dusted off the ol' Rogues anthology, went to the table of contents and noticed, unsurprisingly, that Joe Abercrombie's story was first in the compilation.

In case you’ve blocked out all genre awards this season, and I don't really blame you if you did, Joe Abercrombie has most subtly pointed out that Tough Times All Over won a Locus Award this year:

To combat my apparent short story discrimination, I've decided to read the entirety of Rogues in order, including the stories by authors I'm not familiar with. I'm going to cover one story per post and like these stories themselves, I'll keep it short and sweet (well, maybe not always sweet) since time is precious in the summer. We will start with Abercrombie, end with Martin, and throw a little Lynch, Gaiman, and Rothfuss in for good measure.


Tough Times All Over by Joe Abercrombie

I’ll start by saying that I’m not surprised this story won an award, and you call tell that Abercrombie had fun writing it. The story chases a package from character to character around the city of Sipani. And in the span of about 40 pages, Abercrombie develops 14 different characters to the extent that it takes some authors a whole book to develop one. There are couriers, thieves, crime ring leaders, drunk Northmen, and magicians, to name a few. Going back through the pages to get an accurate count of the number of characters who take a POV in Tough Times (again, 14), I was able to remember something distinctive and familiar about each one of them. That is no small feat.

This story is quite often laugh out loud funny, particularly in the quick dialogue exchanges as characters interact. The dry humor is exquisite:


"I'll give you something willingly," said Fallow, to sniggers from the others.
The woman didn't snigger. "It is a parcel, wrapped in leather, about..." She held up one big hand, thumb and forefinger stretched out. "Five times the length of your cock."
If she knew about the luggage, she was trouble. And Fallow had no sense of humor about his cock, to which none of the ointments had made the slightest difference. He stopped grinning. "Kill her."

Dry humor rules this story, but so do women, much to the surprise of the male characters. As hinted at in the passage above, the males often underestimate the females, usually to their sudden dismay. In all the books I’ve ready by Abercrombie, he has given his female characters equal treatment. They are just as tough, just as cunning, and just as messed up as the guys, even if they are in a society that tends to not value them as high. This is one of the things I’ve always loved about his writing. (Steven Erikson does this really well too, with both gender and race, and he talks about it here.)

So, in conclusion, I really enjoyed reading Tough Times All Over. It was fun and funny, and was fast paced and gripping. This one is most definitely worth an hour or two of your precious summer, and most definitely deserving of the award it won.

Bonuses: +1 for presenting men and women as equally despicable

POSTED BY: Tia, who is currently discovering the joy of the short story anthology