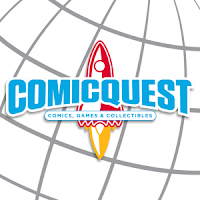 Today we finally return to our normal Thursday Morning Superhero programming, but we do so on a bittersweet note.  I spent the better part of ten hours today loading up my family's belongings into a moving truck for a triumphant return to Austin!  While I am excited to return to what I consider home, I am sad to leave the Evansville comic book community.  I found a home at Comic Quest and I will miss helping out with special events, the friendly and knowledgeable staff, and the good feeling that my kids and I were part of the Comic Quest family.  I was surprised to find such an amazing comics and games store in a a small town and I will surely miss my weekly visit.  If you find yourself in Evansville, Indiana, make sure you pay them a visit and tell them I sent you! 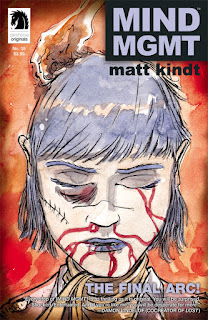 Pick of the Week:
Mind MGMT #35 - Much like my impending move, the ending to Mind MGMT is bittersweet.  It is tough to say goodbye to one of the most inventive and creative comics I have ever read, but it is nice to see the book end on Matt Kindt's terms.  Henry has the one thing that Julianne doesn't have and it gives him a huge leg up.  The animal assault is one of the most powerful scenes in the series and it sets the stage for the final showdown between Meru and Julianne.  I can't believe that this series is ending with the next issue, but am blown away by the compassion and strength that Meru has had throughout this series.  She is clearly one of the best female characters to ever grace the pages of a comic book.  Her growth and development throughout this series should be applauded and I am happy to have shared this journey with her.  Cheers Mr. Kindt!

The Rest:
Old Man Logan #3 - While I am still not on board with Marvel's latest event, I am enjoying the throw backs like this title.  Old Man Logan finds himself outside of his domain, and his attempt to understand what is happening is met with much resistance.  Battleworld is a strange place with a lot going on, and like Logan, I would like to get to the bottom of it and hear from Lord Doom.  Solid spin-off title from an underwhelming summer event.

Birthright #9 - Things get a bit intense as the Nevermind infecting Mikey continue to create difficulties for Brennan and the rest of his family.  It appears as though the conflict between Mikey and the Nevermind has reached a boiling point, but Brennan really steps up to protect his brother and possibly aid the Nevermind in completing its evil quest.  Quite the stressful issue, but another great one from Joshua Williamson.