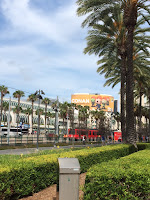 I am nearing my three year anniversary writing for Nerds of a Feather and so it seems appropriate to provide my San Diego Comic Con recap in a list of Top 3's as I have done so in the past.  As usual, the overall trip was an overwhelming blast.  It is hard to describe what being immersed in a sea of pop culture has on the soul, but it is definitely a good, albeit surreal one.  In no other setting do endless groups of adults fight tooth and nail for the opportunity to get a button, a large bag that will likely break, or camp out for a chance to view a trailer hours before it is released to the public.  I fear I am getting too old for SDCC, but I plan on continuing this tradition for the forseeable future.

1. Conan O'Brien - There was no avoiding Conan O'Brien at SDCC this year and this was a good thing.  He was in the airport, on hotel wraps, on bus stops, and cruising on the train.  It was hard to turn your head without seeing one of the Conan Pop! Vinyls that The buzz began when he announced he would be taping at SDCC for the first time.  Fans crashed the 1iota ticket site as they desperately tried to secure one of the hottest tickets in town.  I had the good fortune of attending the Wednesday night taping and it was an absolute blast.  On top of that Conan was moderating panels and hosting exclusive "Not Your Grandma's Bingo" events throughout the week.  If Conan's name was attached to something, it was guaranteed to be a blast.  Very excited that he is returning in 2016. 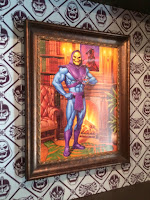 2. Super 7 - Not only did the Super 7 booth and off-site store include some of the best merchandise of SDCC (Mossman Chia Pet!), but it had some of the friendliest staff in all of San Diego.  They were knowledgeable, helpful, and excited to talk nostalgia with fellow nerds.  I secured my Skeletoken that provided me access to their store, which had been transformed into Skeletor's Lair.  From the M.O.T.U.S.C.L.E figures (I loved muscle men as a child!) which were only $6, to the pricier jumbo Master's of the Universe figures, Super 7 has something for everyone.  My only regret is not buying more.

3. Deadpool - While I was not in attendance in Hall H for Saturday's lineup of panels, it was clear that the Deadpool trailer exceeded everyone's expectations and that fans are ready for a proper movie featuring the Merc with the Mouth.  While it may not have been appropriate for some of the younger folk in Hall H, the buzz from this panel dominated my feed more than any other panel of SDCC.  Here is hoping the movie can live up to the hype.

Top 3 Panels' of SDCC:
1. Last Day of Summer: TV Guide Magazine's Farewell to Phineas and Ferb - In what was the most emotional panel I attended, TV Guide put together a fitting tribute to Phineas and Ferb.  The two brothers enjoyed over 8 years of summer with this delightful show the entertained both parents and kids alike.  Learning tidbits like how Doofenschmirtz used to be named Dr. Mittelschmirtz and watching the creators get emotional made this a wonderful experience.  I may have even shed a few tears.  While I am excited for Dan Povenmire and Swampy Marsh to move onto another creative endeavor, it was nice to visit the Tri-state Area one last time to bid adieu. 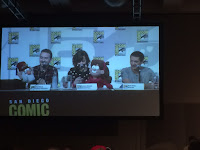 2. Return to Gravity Falls - Kristen Schaal may be the most charming person I have ever seen.  Creator Alex Hirsch and Schaal entertained fans with a sneak preview of some upcoming episodes and answered the most questions of any panel I have ever seen.  The line for questions stretched to the back of the room, but I still don't know why Disney XD won't provide some sort of consistency with scheduling.  It is frustrating to see a show as brilliant as this have scheduling issues.

3. Star Wars: The Force Awakens - While no new footage of the film aired, behind the scenes footage, the emphasis on practical effects, and a large number of the cast entertained fans in San Diego in what I heard was very insightful and entertaining.  Despite my lack of attendance, the reason this makes the list is for the mic drop the panel had at the end.  Attendees were invited to a special Star Wars Symphony performance on the bay.  Part of me wonders if SDCC was timing how long it takes to clear Hall H as it moves forward with its increasing popularity. 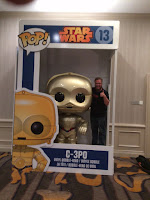 Top 3 Off-Site:
1. Funko Fun Days - Funko out did itself this year.  Fun Days was bigger, more entertaining, and great fan service for those who enjoy collecting cute vinyl figures.  There were song and dance numbers, a fan tribute video (my family made the cut!), and thousands of limited Pop! and prototype figures thrown to screaming fans.  It remains a surreal experience, but one I hope will become a tradition for me at SDCC.  Funko really has a pulse on its fans and treats its biggest collectors as they should be treated.  Well done Funko.

2.  Disney Infinity 3.0 - Thanks to Marvel Unlimited I was able to skip the line for this event, but had I waited to enter I would not have been disappointed.  There were multiple gaming kiosks, which is to be expected, but on top of that fans were treated with fancy foods, beverages, cases of prototype figures to explore, a racing contest, and an augmented reality experience the ended with each attendee walking away with a new Disney Infinity 3.0 character before they are released.

3. Nerdist Conival - Nerdist Industries really upped its game this year.  Taking over all of the PetCo space, the Conival featured Lego Raptors, a Dragonball Z arcade, laser tag, gaming sponsored by Geek and Sundry, and a packed list of free panels to name a few.  Fans who were unable to secure a Comic Con badge or tickets to the Nerd HQ still had a home for some quality panels and the lineup included SDCC gold, like Nathan Fillion, Daniel Radcliffe, and David Hasselhoff.

Top 3 Prizes:
1. Conan O'Brien Pop! - I think it is a little guy made more happy than he should have.  Just look at him! 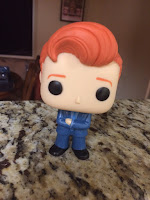 2. M.O.T.U.S.C.L.E. - SDCC is good at bringing on the nostalgia, but nothing prepared me for a mash-up of Master's of the Universe and Muscle Men.  Thank you Super 7. 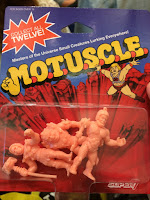 3.  Skylanders Supercharger - There is a reason why my son thinks I am a cool dad.  Let me continue to enjoy this lie while I can. 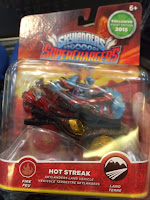