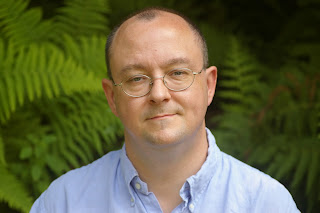 James Cambias is author of the highly-regarded science fiction novels A Darkling Sea and Corsair. He is also an accomplished writer of short fiction and the founder of Zygote Games--a company that seeks to produce "high-quality, fun-to-play games that also educate players about scientific facts and concepts." Today he is here to share his "6 books" with us...

by Gene Wolfe. I literally just started it, but the subject is one I've thought about before: what would it really do to a person to be transported into a fantasy adventure?

by Michael Swanwick. I recently read an excerpt and am now desperate to see what the rest of the book is like. Swanwick gets better every year.

I re-read constantly, without much planning. However, I've recently been re-reading a nonfiction book, Newton and the Counterfeiter

, so I may go back to Quicksilver

by C.S. Lewis. As a teenager I disliked it, as a younger adult I thought it was implausible, but each time I re-read it I find it is more real and more full of wonder. It also becomes more sadly prophetic over time. Negative? Foundation

by Isaac Asimov. This was my favorite series as a teenager, but it has not aged well for me. The characters don't seem up to the epic backdrop, and the Seldon Plan gets creepier and creepier the more I think about it.

My Life and Hard Times

by James Thurber. This question is obviously a tough one because there are so many possible answers. But Thurber basically set my own template for humor.

My latest book is Corsair

, from Tor Books, and it is awesome because: it is a near-future, hard-SF, entirely realistic take on SPACE PIRATES! It's also about shady characters in the Caribbean, mutinous Air Force captains, pirate theme parks, orbital mechanics, and a killer with a magnificent mustache. Think of it as a collaboration between Carl Hiaasen and Tom Clancy.


By the way, I'm writing these responses from a hotel room while on a promotional tour with three other great writers: Elizabeth Bear, Max Gladstone, and Brian Staveley. We're currently in Connecticut, but then go to Towne Book Center in Collegeville, Pennsylvania on July 22, Northshire Bookstore in Saratoga Springs on the 24th, Everyone's Books in Brattleboro, Vermont, on the 25th, and wrap things up with an appearance at Phoenix Books in Burlington on the 26th.