Microreview [book]: So You've Been Publicly Shamed by Jon Ronson

This book should be the official Twitter user manual 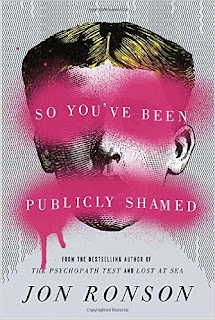 To be honest, Jon Ronson's new book isn't right in line with the nerd/geek-theme of this site, but we nerds aren't exactly known for our calm, rational, measured responses to news or new releases in our particular fandoms that we don't immediately like. We drove Joss Whedon off of Twitter when Avengers: Age of Ultron wasn't everything we hoped it would be, after all. So even though I feel like the internet's dad and we're having to have The Talk, here goes:

In this book, Ronson chronicles the re-emergence of public shaming as a punishment. Used to be, back before the mid-19th century, people convicted of certain crimes would be made to stand in the stocks, or pillory, or publicly whipped, or otherwise publicly made an example of. It was deemed, however, that these were effectively cruel and unusual punishments with lasting, sometimes catastrophic psychological consequences. Let me stress again, people in the 1830s found public shaming excessive punishment. Well, nobody loves anything as much as a public hanging, it seems, so we've now resurrected the public shaming for the digital age.

Ronson starts off by tracing the trajectory of pop-science writer Jonah Lehrer's career. Until 2012, Lehrer was a best-selling author and in-demand public speaker. He then committed some journalistic sins (which are pretty minor, as far as journalistic sins go), and was made to endure an almost unimaginable public crucifixion via Twitter when he attempted to apologize at a media conference. Ronson also follows the stories of Justine Sacco, who was terrible at making jokes about white privilege, Lindsey Stone, who didn't understand Facebook privacy settings when sharing an intentionally disrespectful photo with a friend as a joke, and "Hank," who made the same joke everybody who's ever heard the word "dongle" has made, but this time it cost him his livelihood, and the security of his children. And that's nothing compared to what it did to the woman who set those events in motion.

Ronson also ventures into the worlds of extreme porn, prisons, courts, and online reputation management, and he unearths some obscured facts about the Stanford Prison Experiment that may be kind of important. But overall, this is a book that explores the human costs of hundreds of thousands of us taking ten seconds out of our day to say something casually awful about another human being in a place where the entire world can see it. By and large, Ronson lets these events, the people involved in them, and their repercussions speak for themselves. But I'll go a little farther and say a little about something he only touches on, namely the arbitrary nature of our pile-ons and our own complicity.

Take, for instance, the story of Mike Daisey. You may remember Mike Daisey as the journalist whose story on This American Life about working conditions in China for Apple's suppliers almost turned the world's wealthiest tech company on its head. This is, until This American Life had him back on to corner him about certain misrepresentations in Daisey's original broadcast. Remember? I do. I didn't go on Twitter to talk about what a piece of shit Mike Daisey was, but thousands of others did. But here's the thing: Mike Daisey isn't a journalist. Never really was. He was a stage performer, and did a one-man show about working conditions in China. Ira Glass, the ruler of the This American Life kingdom, saw Daisey's show and invited him onto the air to give his performance for all of This American Life's listeners. But then the fact-checking process revealed some problems with Daisey's account of his trip -- not the facts he was discussing, just his personal exposure to them. So Ira Glass had him back on to ambush him and get him to admit his duplicity. But the way I see it, this isn't Mike Daisey's fault. I don't assume everything Louis C.K. says in his shows literally happened, because he's a stage performer, not a journalist. But Ira Glass made different assumptions than I would have, and opened the door for a public shaming of Mike Daisey that almost drove Daisey to suicide. But now Daisey's pretty much okay, and Jonah Lehrer, who did much the same thing, has yet to publish again or get back on his feet.

Jimmy Kimmel handles it as a joke in his series "Celebrities Read Mean Tweets," and that's one thing. Celebrities are at least accustomed to casual vitriol. But we do this -- repeatedly -- to regular people with a few dozen Twitter followers who happen to say something that can be taken out of context or divorced of its original intention, and as a result, we all chuckle for a bit at somebody's callousness and then these people watch as their lives literally disintegrate. There are actual racists on Twitter. There are entire partisan "news" outlets who only exist to twist and misrepresent things that happen in the world. This is a world where a board member of the NRA blamed the South Carolina shootings on one of the victims because that person voted in the state legislature against a concealed-carry law. But instead of these genuinely awful people, we pick easy targets, weak targets, and straw men. And we destroy them casually.

And when asked about it later, we say, "I'm sure they're fine." Thankfully Jon Ronson went and tracked those people down to let us know that they're not fine, and that our actions online have real-world consequences.

Bonuses: +2 for holding up a mirror in a timely, meaningful way and telling us truths that we'd probably rather ignore

Nerd Coefficient: 10/10. This isn't the best book you'll read by a longshot, but it's a message we all need to hear as social media races toward its adolescence.

Posted by -- Vance K, who doesn't want to be publicly shamed, and is proactively watching his ass.