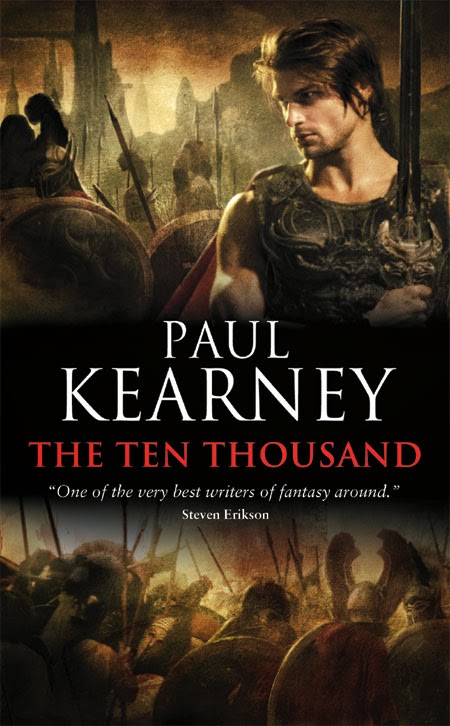 As a historian by training, I am always excited to see fantasies loosely based on accounts of historical events. Spending time in historical archives always makes me appreciate just how full the human experience is... some people's stories are so compelling, so dramatic, and so adventurous that if they did not happen they would have to be made up. In fact, the best stories generally tend to occur in real life, not on the page of the novel. So I was happy to realize that Paul Kearney's fantasy, The Ten Thousand, was based off off of one such historical precedent. The Ten Thousand is a dramatic and fanciful (but somewhat loose) retelling of the Anabasis, the tale of ten thousand Greek mercenaries who accompanied Cyrus the Younger in his attempt to seize the throne of Persia. For those of you who know the Anabasis, unfortunately you are aware of how the story ends. Cyrus met his end in a battle near Babylon, and the Greek mercenaries found themselves stranded deep within enemy territory. But the true joy of The Ten Thousand is the journey, not the destination. It is a well-told military fantasy that takes the reader deep into the physical and emotional battles of long campaigns.

Kearney rightly retells this story through the dark, melancholic, and gritty lens of the (grim-)darker turn in modern fantasy. The world, which is ancient Greece re-imagined, features soldiers of the Macht, a mountainous area composed of independent city-states that are always at war with each other. This has led toward important developments in military technology: the phalanx formation, a massed infantry formation that marches forward and fights as a single (almost mechanical) entity, crushing its opponents. The phalanx formation and its use in the internecine warfare of the age have given the Macht a legendary prowess on the battlefield, a prowess that makes Macht highly sought after as a mercenary force. And the battles they fight, and methods used, are eminently believable:

There was no extravagance to the fighting; no glory... These men were doing their job. They were at work. They did not raise battle-cries, or scream curses. They pushed with their comrades, they looked for openings, and they stabbed out with a swift, economic energy, like herons seeking minnows.

The main protagonist of the story is a young man named Rictus, one of the few survivors of the sacking of his home city of Isca. Cityless and alone, Rictus takes his considerable martial skills to join a mercenary force and to make a name for himself. Only through war will he have a chance at glory and, more importantly, citizenship in one of the great Macht city-states. But upon joining the mercenary force, Rictus soon finds himself swept up in events beyond his control. He joins a force of ten thousand Macht mercenaries, which were employed to travel across the seas to the land of the Kufr, to aid in a struggle for rulership over the Asurian Empire. In the process, the epic Macht quest for glory and gold degenerated into an extended battle, a base struggle merely to survive.

Do not wish to see war. It is the worst of all things, and once seen, it can never be forgotten.

At the same time, The Ten Thousand makes it clear in a number of poignant passages that although the worst of things, war is a natural part of human order:

The army marches, there is a slaughter, and a form of words is made to make the world change. But the world does not change; the water still flows, the seeds still sprout, and those who work the soil continue to work it, a little poorer, a little thinner and sadder than before. The storm moves on, and in its wake the world goes once more about its business. This is war, this passing storm on the land. This stink on the air, this dustcloud which hems the sky. These creatures marching in their thousands, changing everything and changing nothing with their passage. This is war.

This novel does have a bit of an awkward tendency to Orientalize the Kufr in the same way that Frank Miller/Zac Snyder Orientalize the Persians in 300. But it counterbalances this by also demonizing the Macht. Far from being good men yearning for "freedom," most warriors (on both sides) are violent killers who blow off steam by committing atrocity, murder, and rape. In such a violent world, only a sucker could hope for a happy ending. This book is not for the faint of heart.

At its best, The Ten Thousand reminds me at times of Steven Erikson's Malaz novel Deadhouse Gates, though the journey of the ten thousand Macht never reaches the emotional heights or power of Coltaine's Chain of Dogs. But the book falters at times because it is too dark: this is where Kearney fails to match the best writers in the genre. Erikson punctuates the darkness and grit of Coltaine's Chain of Dogs with the fantastic comic relief of Iskaral Pust. Joe Abercrombie keeps the all-out hilarity of Nicomo Cosca on stage left to lighten the mood of his darker novels. Kearney's failure to provide something... anything... similar to break up the gloom constitutes the biggest weakness in what was otherwise a very good read.

A final note: I also wish the author would have paid more attention to believability, especially in regard to the consequences of rape. Now I would be the first to admit that the constant references to rape in the novel are understandable. Soldiers in enemy territory sometimes "go wild," for lack of a better term, and commit acts of depravity that would shame them on the home front. But to have one of the main Kufr characters repeatedly raped, only to turn around suddenly and fall in love (with perhaps the one person who had no designs on her) and want to make 10,000 babies with a Macht soldier... well, that strikes me as lazy writing.

Please take these criticisms with a grain of salt, though. I recommend The Ten Thousand. It is an enjoyable read that will appeal to lovers of grimdark and military fantasy.

Bonuses: +1 for the phalanx, +1 capturing the spirit of battles