Welcome to another installment of Thursday Morning Superhero.  Well the good folks at Epic Registration and San Diego Comic Con debuted the preregistration lottery and it seemed to work out quite well.  As always there were horror stories about the system crashing, not getting the days you want, and so forth, but it didn't seem as bad as in years past.  The system crashed on me when I was about to check out, but a friend got in shortly after I did and secured my four day pass.  Sorry to those that weren't as lucky and best of luck with the general sale.  I always feel that the trip is worth it without a badge.  There is enough to do between the Nerd HQ and the Gaslamp that a good time should be had by all.  Oh yeah.  Some comics came out this week. 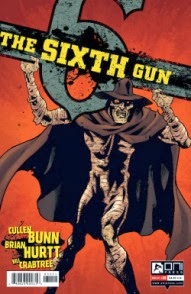 Pick of the Week:
Sixth Gun #38 - Cullen Bunn is putting together what looks to be one of the best endings I have ever read to a series.  Asher Cobb continues on his rampage as Griselda the Grey whispers false promises in his ear.  This doesn't bode well for Drake and his crew, who for the most part want to destroy the six.  Griselda's attack on Brimstone seems to be unstoppable and Drake and Becky appear to be facing their greatest challenge yet.  Jessup and Griselda's minions appear to be an unstoppable force, especially when you consider they have caused Asher to turn.  What I have loved about these past few issues is how they call back to the first arc of this story.  The six are being used in full force, the return to Brimstone, and the freaking return of Billjohn!   While it has been fun to revisit the past, this issue establishes just how dangerous the guns are.  Even those who don't possess the guns, but are near them, are at risk.  Bunn pulled some surprises that I didn't see coming and this was an emotional ride to say the least.  I don't know if I have enjoyed this series more over the past three years than I am right now, and that is saying a lot.  On a side note, the best quote in the issue goes to Kirby who said, "I hope they note that this was the day I finally grew weary of shooting snake-faced hombres."  Stunning issue in what appears to be an epic conclusion to one of the best modern comic series.

The Rest:
The Walking Dead #121 - Chapter 7 of "All out War" came out this week and established a somber tone early on.   If you recall from the last issue, Negan and his crew hit Rick and company with an all out assault that left many dead and houses burned to the ground.  Understandably this leaves Rick's camp divided and even has Rick questioning his plan.  A much slower paced read, but a good change of pace for what has been quite the event.  I am worried that someone I care about is going to die in the next couple of issues.  Curse you Kirkman for creating characters that I feel personally vested in.

Batman #28 - Scott Snyder delivers a curve ball with this issue and ventures away from Year One and teases us with the next chapter for the Dark Knight, Batman Eternal.  Set at some point in the not so distant future, Gotham has become a police state with mandatory 8pm curfews.  Batman, along with his new sidekick?, Blue Bird, infiltrate an underground nightclub to speak to the current kingpin of crime.  A fun book that does a nice job with the tease. I am actually quite curious to learn about what is going on in Gotham and why some things I don't want to spoil are taking place.  As long as Snyder is writing Batman I will continue to read it.

The Fuse #1 - Interesting debut from Antony Johnston.  The Fuse is a space station that appears to be an escape for people who want to leave their lives on Earth in the past.  This doesn't populate the Fuse with the best citizens, but for whatever reason (I am sure we will find out) Dietrich volunteered to work homicide in this god forsaken place.  The first homicide surrounds the murder of cablers, homeless individuals, and little is known as to why they are being targeting.  Not a bad debut, but nothing that is too noteworthy either.