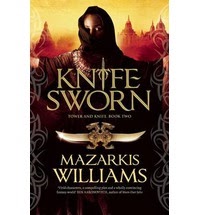 The Meat
Let's talk about the sequel paradox. What is the sequel paradox, you might ask? It's the catch-22 at the heart of the entire enterprise of sequel-writing. Requirement one of the sequel paradox is that any sequel must be similar to, in the sense of being logically consistent with, the original. If, for example, we have a long-suffering, mostly ordinary protagonist in book (or movie, or whatever) one but in book two the same protagonist is suddenly a lasers-from-the-eyes kind of ubermensch, that will certainly jar the audience, as the basic premise of the original has been violated, as have our expectations—this is true, incidentally, even if the radically new framework is great.

But requirement two of the sequel paradox is that any sequel must be noticeably distinct, thematically and otherwise, from the original. This is necessary mostly for artistic reasons, but also partly just to avoid the charge of unoriginality or "cashing in" on an earlier book's success by releasing the same story rehashed. I almost hesitate to give specific examples, because the evaluation of books or any other kind of popular culture product is so subjective that someone out there is bound to be incredulous/apoplectic with fury that I would dare to mention _____ as an example of a cash-in, but I'll take the plunge anyway (sorry, Molly!). I think Ender's Shadow is the go-to example of a book that fails to fulfill requirement two; it is a 're-telling' of Card's original Ender's Game, and despite its frilly accoutrements, I felt nothing significant had been added—no new story had been told. This sort of rehashing is utterly unlike the reimagining of, say, the Battlestar Galactica world, which was so radically unlike the original that fans (in the entire world, are there seriously more than like five living fans of the unimpressive original series?) complained it was too different. Starbuck and Boomer are women? Whaaat? (But of course, it was awesome; if you don't believe me, go watch the dreary, formulaic original series.)

Obviously, the two requirements are not exactly in harmony with each other, and consequently, you'll probably agree that only rarely do sequels manage to equal—and by definition can almost never surpass—the original work. Books two thru six of the Harry Potter series are examples of sequels that manage, to a greater or lesser extent depending on a variety of factors (personal taste, mostly), to fulfill both requirements. They are all very similar in framework, etc. to the original, but advance certain aspects of a larger story and represent distinct iterations of the 'schoolyard drama' story.

Now, at last, we can turn to Mazarkis Williams' Knife-Sworn, the sequel to her excellent The Emperor's Knife (I quite agree with Jemmy's assessment of said volume, or if anything think it even better than he did). Does Williams manage to walk the tight-rope between similarity and originality in his sequel? The answer, I would suggest, is a qualified 'not exactly.'

To be sure, many of fans' favorite characters and story elements from book one 'reprise their roles', so to speak, in Knife-Sworn. Sarmin is back, facing an even greater threat, and he enlists the aid of his unlikely ally Grada along with many others. The same 'palace intrigue' web of deceit and shifting alliances reappears to dominate the Emperor's court.

At this point, you're probably expecting me to denounce the book for failing the originality requirement—being too similar to the original, in other words—but if anything, Williams leaned too far the other way. Certain elements present in the first installment of the series, it may be assumed, will be back, or even enhanced, for the sequel. As I mentioned above, Sarmin is back, but in book two he lacks the very quality that so dazzled readers in book one, namely a certain (je ne sais quoi!) pizzazz, that instinctive ability to unravel problems and ravel (this probably isn't a word, but it definitely should be!) solutions with his pattern-magic. What good is a brooding princeling, now emperor, who spends the entire book failing to understand either the threat he faces, o r what to do about it?

The key to the sequel tightrope is not to lean too far in either direction, maintaining balance somewhere in the middle between similarity and originality. Williams, in my view, departed too far from the original depiction of Sarmin, making him a less effective character around which to weave a story.

Lest we end up judging Williams over-harshly, let me say that he did much better, in this sequel, than most authors can hope to, since the vast majority of sequels are markedly worse than the first volumes. And only a tiny handful manage to equal their original effort (as I've mentioned here before, this is due to many factors, first and foremost the simple fact that many authors doubtless 'use up' most of their best ideas in their first books, the ones that establish their reputations and careers, revving their engines so much on book one that they end up slogging through the sequels on empty). So Williams is in the relatively rare second-best category, in my opinion: his sequel is a bit less impressive than his first book, but remains very entertaining indeed, a worthy if not stunning successor to the magic of book one. I confess myself worried about book three, however (to be reviewed here ere long), because of the The Farthest Shore --> Tehanu kind of direction, vis-a-vis Sarmin (equivalent to Ged, more or less) Williams seems to be going. Stay tuned!

Nerd coefficient: 6/10 "Still enjoyable, but the flaws are hard to ignore"

This review brought to you by Zhaoyun (that's "Shining Cloud" for all you hoi polloi who don't know me personally/know Mandarin Chinese), sf/f book and movie aficionado and main cast member of Nerds of a Feather since early 2013.
Posted by Zhaoyun at 12:01:00 AM