So many good comics out this week.  Alyssa Milano continues to impress, Valiant gives us three decades of nostalgia, and we have a new series from Cullen Bunn.  This is the biggest week of this column to date.  Nine, count 'em, nine books have been reviewed and most of them were quite good.  If the wallet would have allowed, I might have reached double digits this week.  There is always next week. 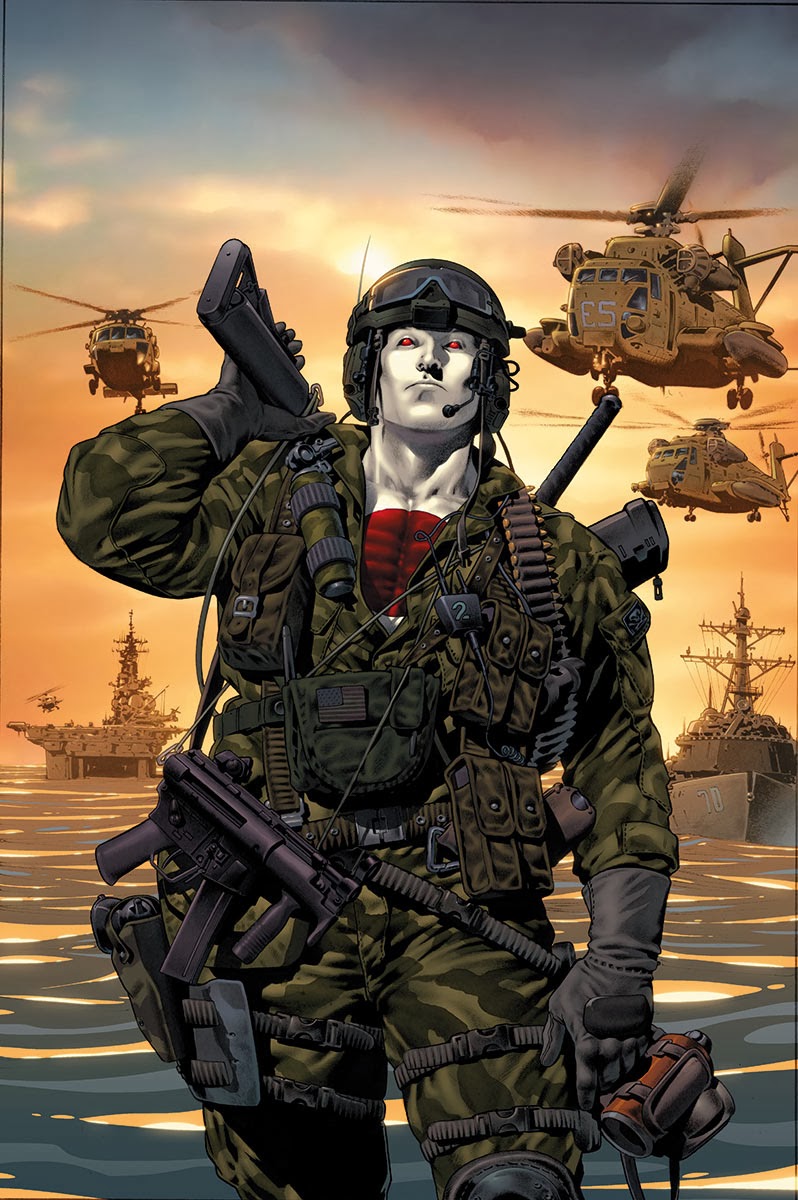 Pick of the Week:
Bloodshot and H.A.R.D. Corps: H.A.R.D. Corps #0 - The fine folk at Valiant sure know how to introduce an event in its universe.  Entitled "Three Decades of Destruction", this issue features different art teams that produced art remnicent of the 70s, 80s, and 90s.  When you complete this issue it feels like you have gone on a journey with your old comic books.   The upcoming Valiant event centers around a rouge Bloodshot.  A creation of Project Rising Spirit (a private security contractor), Bloodshot is free of his programming and needs to be stopped.  In an act of desperation, Project Rising Spirit reactivates the H.A.R.D. Corps in one last attempt to stop him.  This issue features the troubling past of the H.A.R.D. Corps project and has me excited to pick up the next issue in this event.  If you are longing for a nostalgic trip down 90s comic memory lane then you owe it to yourself to pick up this issue.

The Rest:
The Remains #1 - This four part mini-series from Cullen Bunn and MonkeyBrain Comics is off to a tremendous start.  At only 99 cents you should stop reading this and simply go out an buy it.  A harrowing tale from a farm that reaches out for help from the wrong individual, the debut issue of this series will leave a lasting impression on you and have you clamoring for issue #2.  Bunn once again delivers the horror goods and the art from A.C. Zamudio is simply spectacular.  I think MonkeyBrain might have figured this whole industry out.  Deliver high quality comics for less than a dollar an issue.  I don't think I have read a bad MonkeyBrain title yet and this one deserves your attention.


Chew #40 - I always knew that John Layman was a little crazy, but as his masterpiece winds its way down to its conclusion he may be an insane genius.  Much is revealed in Chew #40 and I ate it up (I am truly sorry for that one).  Tony and John consume some of the gallasberry cooked in the juices of a psychedelic chog (I told you he was crazy) and have a trippy good time attempting to help the FDA.  I really want to reveal more, but would hate to spoil a fitting conclusion to the Family Recipes arc.  I would be remiss if I didn't give Rob Guillory a pat on the back for another stellar issue.  As this series advances I tend to take the great work he does on this series for granted.  He delivers A+ work each issue.   I can't move on to the next book without enjoying the fact that Layman gave us a ABC toe (already been chewed toe) and a nice shout out to the great Ghosted from Joshua Williamson.  So happy to be back into this series.

Serenity: Leaves on the Wind #2 - The action and drama are ramped up in issue #2 of this new series from Dark Horse.  Fans of the original series should be all over this series as Zach Whedon continues to remain faithful to the beloved franchise.  The writing feels like it is a continuation of the television show and this issue really delivered a strong hook that could bring in casual fans like myself.  Zoe is finally transported to get the medical care she desperately needs after giving birth, but this ultimately leads to her capture and puts the Alliance hot on the tail of Serenity.  After the tease of Jayne in the first issue, fans will be pleased to learn that he is featured more prominently in this book.  The tension between Jayne and Mal felt very real and the ending will have you desperately waiting for issue #3.  Even as a casual fan of the series I am hooked on this title.

Tomb Raider #1 - Dark Horse did not mess around when it set out to create a sequel to the most recent Tomb Raider video game.  Dark Horse went out and got Gail Simone to deliver the goods.  As a fan of the game, I was happy with this debut.  Simone did not waste any time setting the scene for the next chapter in Lara's life.  She and the surviving crew are suffering nightmares and it may be connected to the gold they took from the island.  To me what made this title work so well was the art from the team of Nicolas Daniel Selma, Juan Gedeon, and Michael Atiyeh.  Their combination of pencils, ink, and colors create a cell shaded effect that feel like a video game.  Most impressive and looking forward to more.

Mind MGMT #19 - Matt Kindt's latest spy series has reached its midway point and the second chapter looks to be as engrossing and exciting as the first.  In the first installment, Meru, Lyme, and company seek to recruit another Mind MGMT agent to their side.  This time the Magician is at stake and things don't go quite according to plan.  Meru's ability to cancel out an agents powers is turning out to be more of a crutch than a weapon.  Add that to the fact that the Eraser and company have officially formed the second coming of Mind MGMT and Lyme and Meru have their work cut out for them.  This is feeling like a good time to go back and revisit the journey from issue #1.  Love this series.

Hacktivist #2 - It turns out that Alyssa Milano should have begun writing comics quite some time ago.  Hacktivist has been a fun ride and the new twists and turns in issue #2 were unexpected and exciting. Nate and Ed, at the suggestion of Nate, team up with the U.S. government to seemingly aid the Tunisian rebels.  By leveraging coding skills and social media, Nate and Ed understand how to create a movement with technology similar to this.  Ed, aka, ..sve_Urs3lf, doesn't seem fully on board with the agreement.  Not wanting to spoil anything, Milano does a nice job throwing in some surprises and delivering a hook that will bring you back to issue #3.  With a nod to Snowden, Hacktivist feels almost as if it is reporting current events, not merely telling a story via the comic medium.  If you are someone who is into coding and social media then look no further than this title.

The Wraith #4 - This title is such a departure from Locke and Key that I am curious what fans of the series think of this.  While Joe Hill is the master of horror, he always includes so much heart in both his comics and novels (well maybe not The Cape).  The Wraith is pure evil and it can be difficult to stomach at times, but still manages to capture my attention.  If you have not read NOS4A2 I don't know if this title is for you.  As a fan of NOS4A2, this has been a disturbing look at Charles Manx, but if you aren't familiar with the story I don't know how enjoyable this would be.  Highlight this week was the nod to Curious George with the names Punch and Judy.  I am enjoying this, but would be cautious with who to recommend it to.

The Walking Dead #122 - "All out War" is rabidly reaching its conclusion and I am not sure how I am going to cope with the loss of Negan (assuming he is lost).  This vile individual has breathed new life into this series that, while still good, had lost some of its early charm.  This issue is clearly setting the stages for the final issues in this arc.  Can Negan trust everyone in his clan?  Is Rick's plan going to be effective against the relentless Negan?  I really want to spoil how Negan took Lucille to the next level, but that wouldn't be fair.  A seemingly calm issue in what has been an exciting arc.
Posted by Mikey N at 2:30:00 AM