Another stellar week of comics that is filled with a plethora of quality horror books and I am happy that there has been an uptick in the genre as of late.  The big news in the world of comics came as Top Shelf announced that it would be launching a series of DRM free graphic novels.  Simply purchase a book, pay a small additional fee, and you have yourself a digital comic that is truly yours.  It is a good time to be a fan of independent publishers who are being innovative and put the reader first.   Viva la comics! 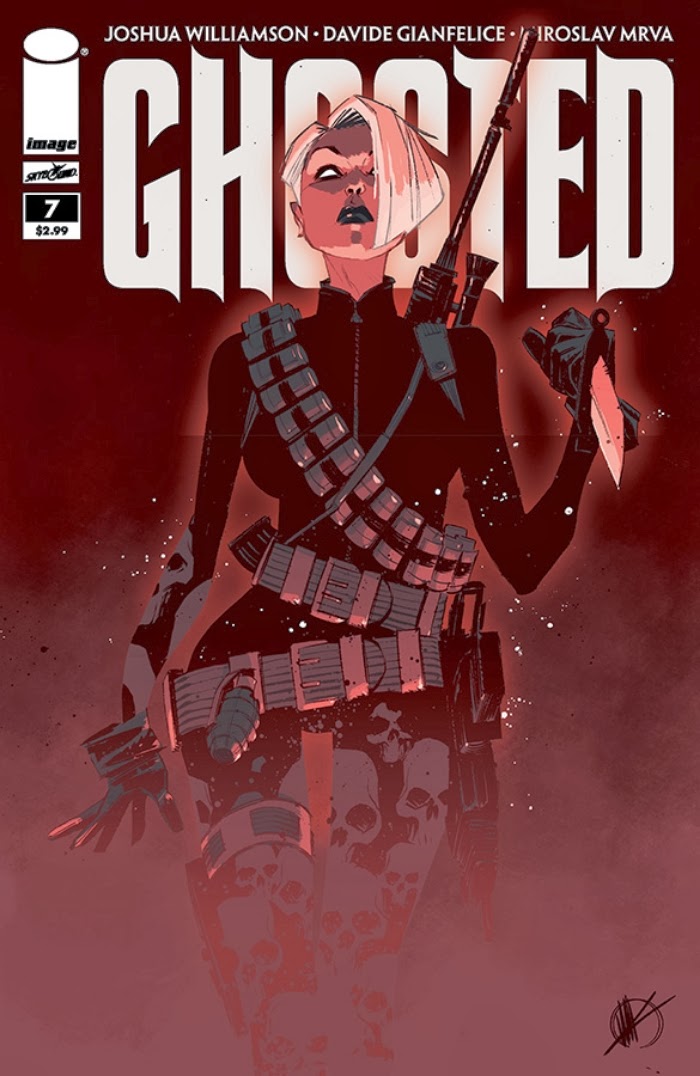 Pick of the Week:
Ghosted #7 - The second arc of Ghosted looks like it might exceed the first.  I never thought the heist and horror genre could pair up so nicely.  In this issue Jackson, Trick and the rest have made their way down to Mexico to save Nina from sex traffickers.  We quickly learn that this particular group has quite a lot of power and has a fetish for girls who are possessed by demons.  Jackson is still looking for a way to die and find peace, but Anderson (who is quickly becoming my favorite character), isn't sure his time has come.  Having already pulled successful heists that have included large amounts of cash and a ghost, he is just the man to plan a heist to steal a girl who is possessed.  Joshua Williamson gives us a new spin on a haunted house and continues to write a smart, humorous series that is phenomenal.  Mix in the art of Davide Gianfelice and I think we have an Eisner worthy series.  I love Gianfelice's ability to transition from a seemingly normal panel to one filled with terror.  His style matches the wit and humor of Williamson's writing.  I was worried with Locke and Key over and done with and the Sixth Gun on its way that I wouldn't have a quality horror comic to fill the void.  Something tells me I will be ok.

The Rest:
Fables #138 - Leave it to good old Bill Willingham to bring a series that is 138 issues deep full circle.  Whether he has been planning this all along or not, a tip of the hat to you kind sir.  As Fables draws to an end we are treated with the return of Geppetto in an issue that was simply mesmerizing.  It ended faster than expected because I was entranced with what the old carpenter had been up to since his capture way back when.  I had mixed feelings when I heard Willingham was going to end his magnum opus, but given the direction it seems to be headed I feel the conclusion will be nothing short of epic.

Daredevil #36 - Mark Waid's run with Daredevil has been nothing short of glorious.  This week we get the pleasure of Matt Murdock reaping all sorts of legal havoc by, under oath, admitting that he is Daredevil. It is a bold move to take down the Sons of the Serpent in an action packed, fun issue.  Waid has taken Daredevil to new heights and, without spoiling anything, I am very curious to see how this upcoming move is going to pan out.  The one thing I know for sure is that I will be picking up the next issue to see what happens next.

Curse #2 - Having read and enjoyed some Hoax Hunters, I was excited to delve into another horror title from Michael Moreci.  Laney Griffen is a former football great, who is currently unemployed and struggling to pay for the medical bills amassing from his son's sickness.  He lost his wife at some point in the past, and his sister-in-law (the town's sheriff) is threatening to take his son away because she can provide better care.  In a final attempt to secure enough money to pay for his son Jaren's medical bills, Laney attempts to secure the bounty on a mysterious killer that has been on a rampage.  He has an encounter with the beast (Anton the werewolf) and currently has him locked up in his basement.  Moreci and Tim Daniel have crafted an interesting story thus far and I look forward to its conclusion over the next two issues.  Riley Rossmo and Colin Lorimer deliver some truly haunting panels with splashes of blood all over the place.  The sum total of this work is a solid mini-series that is well worth your time.

Undertow #1 - Set in a dystopian future, Undertow explores a world in which humans live primarily underwater and those who exist on land are more beast than man.  Atlantis is the primary hub underwater, but explorers have begun to break away and seek refuge on land.  Redum Anshargal is a man that shouldn't exist.  He has lived above water and with his fellow refugees hunts the water dwellers from above.  The protagonist in this story, is taken under the wing of Redum and begins to learn the lay of the land.  Steve Orlando delivers a solid first issue, but the art is where this book truly shines.  Artyom Trkhanov delivers some of the most stunning panels of the year and his character design of the water dwellers, the surface dwellers, and Redum is diverse and effective.  I suggest you pick this one up.