In order to celebrate the launch of Peter Higgens' new novel, Truth and Fear, the good folks at Orbit are providing five (five!) copies of his debut, Wolfhound Century, to lucky NoaF readers in the U.S. or Canada. Don't know the book yet? Well, here's what it's about:


Investigator Vissarion Lom has been summoned to the capital in order to catch a terrorist --- and ordered to report directly to the head of the secret police.

A totalitarian state, worn down by an endless war, must be seen to crush home-grown insurgents with an iron fist. But Lom discovers Mirgorod to be more corrupted than he imagined: a murky world of secret police and revolutionaries, cabaret clubs and doomed artists.

Lom has been chosen because he is an outsider, not involved in the struggle for power within the party. And because of the sliver of angel stone implanted in his head

Now, you may recall that we liked Wolfhound Century quite a bit. In fact, Jemmy said:


Fans of dystopian fiction, noir, and science fiction and fantasy (especially those weary of tired old world building that always seems to center on English history or Western European norms) will find much of interest in this book. I, for one, can't wait to see what happens next.

So do you live in the U.S. or Canada? If so, enter today to win your copy! 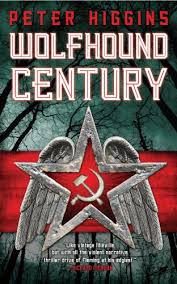 This giveaway is open to anyone with a US or Canadian shipping address. The giveaway ends at 11:59pm PT on February 17, 2014. We will announce the winner later that day.