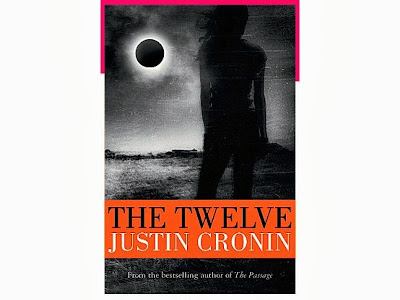 I don't know quite what to make of this book, or of my reaction to it. In most ways it's an excellent sequel—it delivers the same superb writing and engaging characters while, in fact, improving on one questionable aspect of the first book, The Passage, whose two giant halves fall to either side of a 100 year gap. In The Twelve, by contrast, that radical chronological break has been replaced with three distinct time frames, and occasional shuttling back and forth between them, which reduces the jarring sense of rupture book one delivered.
All the key characters from book one return (except for Babcock!), and Cronin spices up the mix by adding a handful of no-longer-fully-human, not-quite-vampire creatures which one person, in a burst of insight, calls Renfield-esque. In other words, the mystical bond between vampire overlord and not fully turned Creepy Guy is explored at some length, in a very clever and engaging way.
It all sounds good so far, right?  And it is—it's good. But not great, like The Passage (despite its flaws) was great. I wasn't moved (as much), nor was I gripped with the same neck-crunching force as emanated from the pages of book one. This was something of a puzzle to me, since most of this book's readily identifiable features seemed to equal, or in some cases outperform, the first book, so one could say book two is somehow slightly less than the sum of its parts.
Vowing to solve the enigma of this book's slight disappointment, I considered all the usual suspects: a) how the very nature of sequels almost always precludes them surpassing the original (partly because the logic of the world established in book one constricts the parameters of where the story in potential sequels might go, and partly because authors, for obvious reasons, tend to put all their best ideas in their first book and consequently have to dig deep to produce anything like the raw brilliance of their initial effort), b) how an excellent first book creates impossible expectations for the sequel(s) in the minds of the readers, and c) how strong attachments to characters from book one mean that if any major life-changing (or –ending!) events befall these characters it might well alienate some readers who find their own lives in the toilet because of damage to their beloved (insert character name here). And sure enough, The Twelve does take moderate hits from all three of these areas, so that might explain part of why it seems not quite to have lived up to The Passage.
It explains part, but not all, for as I thought more deeply about why I personally found it just slightly disappointing, a fourth reason popped into my head: the climax of book two, despite being a lot more exciting in visual description (it plays out a lot like a good action movie, in fact), is somehow less rewarding than that of book one. I can't say much more than that without "Dumbledore dies at the end"-ing it for you, but suffice it to say that the stakes in the final act, and even the scale of the challenge, seemed slightly ill conceived.  In the end, our heroes arguably accomplish more, and face a much more drawn out struggle to do so, but the world itself feels less menacing than that of book one (five years earlier), the possibility of human survival/victory much greater, which led to a problem of atmosphere.
Remember Alien(s)? People argue back and forth about which was best, Alien or Aliens, but they're quite distinct; Alien has spine-tingling suspense, while Aliens brings edge-of-your-seat action and thrills. In some ways, the same thing is happening here with Cronin's work. (I just hope book three doesn't end up like Alien 3! We'll know we're in for an Alien 3 experience if all our favorite characters show up dead at the very beginning, I suppose.)

Anyway, the experience of reading book one was rather like watching Alien—one can imagine being in that place, being hunted, and knowing that no place exists beyond the monster's reach. This book, by contrast, brings an Aliens vibe, with excitement aplenty, yet without that pervasive sense of dread from the finely crafted mini-world of book one.
Despite personally enjoying Aliens more than Alien, with Cronin's work the Aliens direction feels less successful, and The Passage (book one, that is) remains distinctly superior.  But if you're reading this, Mr. Cronin (and yes, I know the chances of that are slim), pleeease don't try an Alien 3 vibe for the threequel!

Bonuses: +1 for Cronin's fantastic prose (example: 'He still had the young person's predisposition to regard the world as a series of vaguely irritating problems created by people less cool and smart than he was'), +1 for scrapping the 100-year gap—or rather, yawning chasm—that bifurcated book one

Penalties: -1 for treating Amy and Alicia so callously (you'll see what I mean), -1 for the ending and for losing that sense of dread so painstakingly crafted with the Colony in The Passage