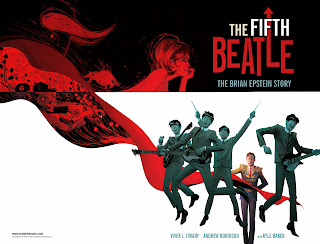 Graphic novel The Fifth Beatle, published last week by Dark Horse comics, was a labor of love by writer Vivek Tiwary, who felt that in all the mountains of volumes ever written on the Beatles, there had never been a fitting amount of ink devoted to the story of Brian Epstein, the band's manager. He's right — Epstein has largely been relegated to the corners of the Beatles' story, possibly because of his early death at age 32 in 1967, and his attendant inability to get his own version of events out there and write books and whatnot. The problem with The Fifth Beatle is that it may string together a series of events that tell a more-or-less complete story, but there's very little emotional or psychological insight or storytelling prowess on display here, so the whole thing seems a bit like a very pretty Cliff's Notes version of a better work.

Epstein was Jewish, and secretly gay, which were two big strikes against him in a blue-collar, Protestant town like Liverpool in the early 1960s. While working at his family's record store, he saw local band The Beatles perform, and got the crazy idea that they could be "bigger than Elvis." Epstein talked the boys into letting him manage them, even though he'd never attempted to do anything like that before. He paid for them to record a demo, shaped their image, got them signed to a record deal, and a couple of years later they were, in fact, bigger than Elvis. But according to The Fifth Beatle, Epstein was never satisfied, was obsessed by mistakes he had made, like negotiating a bad deal for merchandising rights, and fell into prescription drug abuse to combat his exhaustion and homosexuality, until he overdosed and died at home after Sgt. Pepper's Lonely Hearts Club Band was released.

I kept feeling like the pieces for a compelling story were all in front of me while reading this graphic novel, but they never came together. Epstein's struggles were all internal — he certainly had every trapping of external success and accomplishment — yet this book does a poor job of conveying anything but the externalities. Sure, I can take a guess as to what it may have felt like to have always felt like an outsider, always harboring secrets and fear, but this telling doesn't help me out any. And then in the final pages, it takes such a bizarre, Surreal turn that hinges around Epstein's assistant Moxie, a character I didn't know was a composite character, made up of several people who filled many roles in Epstein's life, that I found myself lost. I had to Google Moxie, and after a little background reading, found the ending a little more comprehensible. But it seems like a big mistake to make, assuming a baseline level of knowledge in your audience about a story you're telling because you don't think enough people know about it...

Bonuses: +1 for the hand-painted, watercolor artwork by Andrew Robinson. It's quite remarkable, even if much of the overt symbolism on the pages is heavy-handed.

Penalties: -1 for its inability to get inside its main character; -1 for a clumsy ending