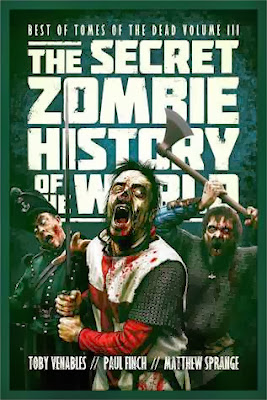 Aside from borderline examples like Frankenstein's monster, the concept of the zombie, especially the idea of masses of dead men walking (here's not looking at you, Sean Penn!) in a shambling ravenous horde and wreaking vengeance on the living is really a Cold War-era phenomenon. Associated with a killer combination of a seemingly innocuous but actually menacing technology (the radio, say) and Communist brainwashing in such classics as Night of the Living Dead, it's easy to see how fears of radiation and other double-edged advances of that era might have contributed to fears of the dead rising. Many zombie tales feature some kind of ghastly repudiation of religious faith as well, in which figures of religious authority are torn apart despite their protestations that the walking dead cannot be (probably because of the implications this has for Judeo-Christian notions of life after death).
Given that background on zombies in popular culture, this collection of three novellas attempting to place zombie plagues throughout history was an intriguing twist. There was a slightly sophomoric match-up vibe, a 'zombies vs. _____' sense in all three: Vikings, knights, and British navy, respectively (needless to say, the good, or at least the living guys carry the day!). In each, the reader is presented with an intrepid leader (or, in the Welsh story, a maverick knight) whose can-do attitude and refusal to be cowed by the macabre attackers holds the key to survival.
This collection certainly isn't for the faint of heart. Violence is in ghastly supply in all three, with the gore reaching ludicrous volume in knights vs. zombies, where the phrase "a porridge of brains" or a close variant appears something like five times. Given the slaughter, one might expect the knights vs. zombies tale to be a parodic take on violence in zombie stories, but unfortunately, it's deadly serious in tone, and even situations whose comic potential is tantalizing, truly low-hanging fruit, have all the laughs beaten out of them with bone-shattering force. In fact, given the patently absurd starting premise—just another day as a Viking/knight/sailor when suddenly the zombie horde is unleashed, but trusty captain/sir ____ leads the good guys to victory—it's surprising just how seriously all three stories take themselves.
In fairness, for readers who genuinely thought "what's the only thing that can make gritty, horrifically violent stories of Viking/medieval/naval combat better? Zombies!", it can't possibly get any better than this volume.  All three stories are generally quite well and engagingly written.  But although stories where zombies lurk around each corner rarely open themselves to criticism for being slow or poorly paced, in this case all three felt rather slow or dull at times, whether it be the too-long introduction to the Viking crew (not to mention the irritating boy, a quasi-protagonist but not really the main character whose addition to the crew, on balance, only subtracted from the story's entertainment value) in story one, the incessant description using visceral metaphors for mortal injuries in story two, or the paragraphs-long exposition detailing the particulars of naval combat in story three.
Also, and perhaps inevitably, these stories present us with entirely too much dramatic irony.  Obviously, the reader knows zombies will appear in the tale, so a protracted "What manner of foul beast is this?" kind of confusion among the characters loses its charm quickly. On that score, Vikings was weakest (page after page of "I think they're the walking dead." "Bah—impossible!" dialogue, etc.), and Navy vs. zombies was best ("What the?!—well, whatever.  Aim for the head!"). And speaking of the zombie's most famous weakness (head-shots, and not the kind actors carry around in their hip one-strap backpacks, either!), story two changed up the zombie formula a bit, Prydain Chronicles/Irish mythology style, but it felt less like an interesting twist and more like a jarring physical impossibility—what animates the dead body, if not the head?
Conceptually, the most innovative of the stories is definitely story one, what I'm calling 'Vikings vs. zombies'. I won't spoil the story for you, but suffice it to say that there's a sinister yet seemingly impersonal force behind the zombies. This is a rarity: in most stories, the zombie plague is presented as retributive in nature, at least indirectly, so for example zombie hordes might be a result of capitalist society's excessive profit-seeking->ethical line-crossing in medical experimentation, etc. So too in story two, where British misdeeds call down a Welsh curse, or story three, where dirty family secrets come back to haunt our intrepid hero. But in story one, the Vikings are simply in the wrong place at the wrong time (it took all my self-control not to reveal the big plot twist here!). I found this story to be the strongest and most memorable of the three.
As with any anthology, 'grading' the book as a single work presents problems, so I've settled on a solution certain to please none and infuriate all: an average score, without caveats or explanations!

Baseline assessment: 7/10 (because having zombies invade history is an awesome idea!)

Bonuses: +1 for Vikings chopping the bejeezus out of lots of zombies and not even caring that they were doing so

Penalties: -1 for making such zany stories so serious, -1 for too much dramatic irony about zombies—methinks they did protest too much

Nerd coefficient: 6/10 "Still enjoyable, but the flaws are hard to ignore"

Check out our unique scoring system to see why a 6 means this book is better than, say, two thirds of all books ever!
Posted by Zhaoyun at 12:01:00 AM